Latin America experienced massive social unrest during the war years. The disastrous effects of the global economic war meant severe hardship for workers and their families, mainly in urban areas, and to a lesser degree in rural settings. Labor connected to the export and commercial sectors suffered most from the war’s consequences. The effect was a rise in strikes and in political mobilization amongst workers, with some following the model of the Russian Revolution. Governments and newly formed right-wing militias reacted with outbursts of extreme violence.

While the war meant enormous profits for small export-oriented Latin American elites, the majority of the urban population faced massive challenges in meeting their basic needs throughout the war. Calls for national unity in the face of wartime crisis gradually lost their persuasiveness. During the first three war years, Latin American workers did not have the power to fight a labor conflict. Still in 1917, the number and severity of labour strikes increased dramatically, and in 1918 and 1919 this process continued to accelerate. The Allies suspected the subversive work of German spies and propaganda were at the root of the labor strife, which aimed to disrupt vital supplies from the Latin American neutrals and belligerents. However, the social unrest had much deeper roots, including a combination of internal and transnational factors.

The Social Impact of War↑

For most of the Latin American population, especially in the cities, the most urgent problems caused by the war were rising prices and significant increases in the cost of living. Inflation would continue in most countries until the 1920s. The continuous rise in the price of foodstuffs, and the falling real wages led to a worsening of the situation for workers. The rise in prices had many causes. First, imports were greatly reduced and caused unlimited speculation in many places. This led to a rise in prices for basic foodstuffs, a development which the press fiercely but unsuccessfully criticized.[1]

Another cause of the rise in the price of foodstuffs was the enormous demand for wheat by the warring parties in Europe. This led to shortages in supplying the domestic population in Argentina, and also in Peru after 1915. Prices for other basic goods, especially textiles and combustibles, also rose quickly. For example, prices for coal in Buenos Aires increased fivefold over the course of the war.[2]

During the first years of the war, the labor movement tried, mostly in vain, to protest against these developments. The measures taken by the government against price increase remained without effect, or were in some cases counterproductive, if measures were taken at all. In the Chilean case, the government decreed an export stop for coal in order to prevent shortages. The mines reacted by cutting down production and dismissing workers.[3] The hardships of workers remained an open question, which the public often discussed and denounced, but nonetheless, governments were not able to solve these issues well into the postwar period. In 1918, rising rent prices rent further complicated the lives of many workers.

Mobilization of workers took time due to the weakening of the labor movement in the years prior to the war. However, in 1916 the first major strike of port workers occurred in Buenos Aires, and after this action, strike activities increased rapidly.[4] The number of strikes and participants rose in the Argentinian capital from eighty strikes with a total of 24,300 participants in 1916, to 367 strikes with a total of 309,000 participants in 1919. Most strikers belonged to the Federación Obrera Regional Argentina (FORA), which remained relatively weak, however, because of the high number of seasonal workers and day labourers represented in the organization. In contrast to his predecessors, the Argentinian President, Hipólito Yrigoyen (1852-1933), a candidate of the Radical Civic Union (Unión Cívica Radical, ECR), was supposedly worker-friendly. He did indeed rely less on the police and the military when trying to suppress the strikes, but labor conflict continued to lead to casualties.[5] In March 1918, the situation worsened. The workers of the British-owned railways went on strike endangering the supply of the Allies.[6] During the following months, the quantity and intensity of labor conflict increased sharply.

Much like in Argentina, strikes in Chile started in 1916 and grew in 1917. In this case, strike action came as a result of the dramatically increased costs of living, which rose approximately 140 percent between 1913 and 1919. A strike of port workers in Valparaíso in April, and of the labourers in the nitrate works in the northern desert in August, shook Chilean society especially hard in 1917. Labor unrest increased steadily in 1918. In November of that year, different social groups including unions, Catholic organizations, women and youth organizations groups staged a mass rally in Santiago protesting against the cost of living.[7]

The Brazillian situation differs slightly in that this country did not enter into the war until 1917. Before Brazil entered the war social unrest had risen in the country throughout 1917. In July, a general strike paralyzed the city of São Paulo and workers in Rio de Janeiro joined in solidarity. Brazilian authorities suspected German sabotage as the cause of these events.[8] The fear of social destabilization on the part of the elites was one of the factors propelling the country into the war because it gave the ruling classes an excuse to respond violently to the labor unrest, and to appeal to the general population for patriotism.[9]

In many other countries in the region, strike waves also started in 1917 or 1918. In most cases, labour unrest was mainly an urban phenomenon. Not in Peru, however, where the 1918 strikes first took place in rural areas. From there it spread to the cities peaking in the general strike of January 1919.[10] In Mexico, strikes concentrated on the oil region around Tampico and were directed against British firms.[11] Serious labour unrest also developed in countries as diverse as Columbia, Ecuador, Bolivia, Paraguay, Uruguay and Cuba during these years.[12]

Latin American governments became increasingly nervous about labor unrest. This was partly because information about the extent and character of the Russian Revolution began to spread in late 1917 and into 1918. Despite negative reporting by the bourgeois press, the October Revolution inspired the left in the whole Latin American region.[13] "Maximalism" - as bolshevism came to be called in Latin America in the early years – was interesting to many labor activists. Rallies on 1 May 1918, saw the participation of the first "maximalists" and a few months later organizations like the União Maximalista (Maximalist Union) in Porto Alegre, and the Federación Obrera Rusa de Sudamérica (Federation of Russian Workers of South America) in Buenos Aires, were championing Bolshevik ideas. By the end of the year, the Argentine Socialist party split and its left wing formed the first Communist Party of Latin America.[14] In addition, the Mexican Revolution, which resulted in the ratification of the Mexican constitution in 1917, was also a source of inspiration to the nationalist left.

In many countries the governments reacted with massive violence to the perceived threat that they understood labour unrest to represent. In Argentina, the press warned against "sovietization" and fear of social revolution spread rampantly among the upper classes. Tensions exploded in January 1919 in the so-called tragic week (semana trágica). In that week a civil war shook not only the capital, but also several provincial cities causing may injuries and numerous deaths. President Yrigoyen sent the armed forces to stop the striking workers in order to prevent the officer corps from staging a coup against him. Labor unions reacted with a general strike. Especially the Russian and Jewish immigrant communities of Buenos Aires suffered from massive violence.[15] While Brazil had suffered from a tragic week already in 1917, other countries in the region also experienced vehement attacks on workers and unions by government forces. In addition, in countries such as Argentina and Chile, right-wing militias organized to fight against what they perceived as the imminent threat of social revolution.[16] Violent social strife was to overshadow much of Latin American history in the 1920s and 1930s, and this action can be understood as a direct heritage of this wartime unrest.

Shovelers at a nitrate reduction plant in Chile 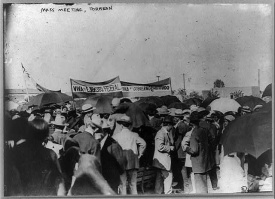