The music hall song “La Madelon” was first performed in Paris café concerts before the outbreak of war, but it did not initially catch on. Not until 1917 did it become a favorite – first among propaganda-scorning soldiers and then war-weary civilians. It subsequently inspired sequels, parodies, and enactments in theater and film.

When the music hall march “La Madelon,” also known as “Quand Madelon,” debuted in Parisian café concerts in early 1914, it went almost unnoticed. It was just another song in the popular genre of comic soldiers (comiques troupiers), who sang lighthearted ditties about their experiences in the peacetime army.

In the song’s three verses, soldiers tell of a nice young waitress serving them wine in a rustic tavern. The men think of her night and day. They playfully try to embrace her while thinking of their sweethearts back home, the women they will marry. When a corporal proposes to Madelon, she refuses, saying with a smile that she likes having the entire regiment.

During the first two years of war, nationalistic, martial songs held sway on the home front. But on the frontlines, soldiers criticized bellicose lyrics as propaganda (bourrage de crâne). The cheery march “La Madelon,” an appealing alternative, became popular on the front in 1916. Then in the summer and fall of 1917 it became a “hit” in Paris. Singing and listening to “La Madelon” allowed civilian audiences to identify with the revered poilus (soldier). And it offered them a comforting narrative – a pleasant old-fashioned scene – at a critical time in the war, allaying worries about infidelity, prostitution, women in new roles, and coarsened combatants. The beloved waitress’ choice of friendship with the group instead of marriage suggested patriotic devotion, feminine independence, or both.

“La Madelon” inspired numerous parodies and sequels and has remained in public consciousness as the emblematic hit of the war. 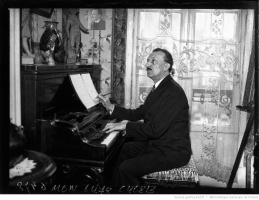 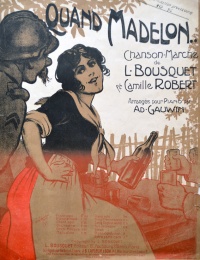