La Dame Blanche was an intelligence network created in Belgium in 1916. It was essentially devoted to the observation of railways. At the end of the war, it was comprised of over 1,000 agents and covered a large part of the occupied territories.

During the First World War, a multitude of clandestine organisations appeared in the occupied territories. Among these, La Dame Blanche (LDB) was without doubt the most important. The network was founded in Liège by Walthère Dewé (1880-1944), Jean Desonay (1886-1948) and Herman Chauvin (1876-1952). The name of the network was chosen in reference to the legendary “White Lady”, a spectre whose appearance was said to spell the end of the Hohenzollern dynasty. About 1,100 agents were recruited throughout the war. Among them were more than 300 women, as well as members of the Catholic clergy (8 percent).

After a short collaboration with the services of the British General Headquarters (GHQ), in July 1917 LDB became definitively associated with the Tinsley organisation, the British Secret Service’s outpost in the Netherlands. The Secret Service went on to provide funds and instructions to the network until the end of the war. With this support, the network grew quickly, covering almost the whole of Belgium by the end of 1918, as well as certain areas of northern France and Luxembourg.

La Dame Blanche concentrated its activities mainly on railroad observation. Railway traffic was to be observed day and night and in both directions. All reports were collected and verified by the organisation before being given to a “courier” service that transmitted them to English agents in the Netherlands. The observation posts were located on the main railways; throughout the war they covered nearly all the occupied territories. The map (see image) shows that in 1918, no German military convoy could arrive at the front without being spotted by LDB agents. Besides observation of the railroads, major roads, airfields and other German army sites also had to be observed. In order to carry out these different missions, a territorial observation service was formed. Its 400 agents combed the country in search of the slightest details that could be of military interest.

The LDB archives still contain several kilos of reports, resumes and maps outlining German train movements for the year 1918. This indicates the quantitative importance of the organisation’s work and gives an idea of what the English service was able to extract from the reports received. At the end of the war, the Allies knew with almost daily accuracy the details of German positions. It is even clear that the LDB was not the only information on which the Allies relied, as those documents in Allied hands constituted a rich source of interest regarding the study of the German military situation.

It is well documented that the German occupier fought hard against spying activities in Belgium. The LDB was confronted on ten different occasions with the German judicial system – forty-five agents were arrested, two of whom were condemned to death and executed – but the network was never in any real danger. This was certainly due to the very strict selection process of the agents and the compartmentalising of the different cells and activities.

At the end of the war, the LDB had 1,084 official members. The War Office gave a certificate of honour to each of them. Some members even received honourable distinctions, for example the titles Commander or Officer of the Most Excellent Order of the British Empire. In Belgium, since they were considered to have worked for a foreign power, these WWI agents were never fully recognized. 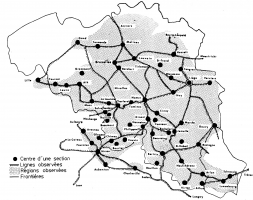