This article details the mutiny of two Russian brigades sent to France in World War I. The less rebellious of the two was finally disciplined and used to suppress the unruly brigade in 1917 in what might be termed the first battle of the Russian civil war. Afterwards, remnants of both brigades were formed into the Russian Legion of Honor and returned to the front and fought loyally for France until the end of the war.

Formation of the Brigades↑

In a crass exchange of human flesh for war materiel initiated by the French Premier Aristide Briand (1862-1932), the Russians sent to France in 1916 two brigades, known as the First and Third, to fight on the side of their French allies. The core of the First Brigade was composed of men from the working class sections of Moscow, where they had been imbued with proletarian ideals and had an acquaintance with Marxism. The Third Brigade had been drawn from rural peasant stock and were much more conservative. Both brigades were sent to the front in the Champagne region of France, where they performed very well, especially in the infamous Nivelle Offensive of 1917.

Beginning and Suppression of the Mutiny↑

Efforts to keep the news of the February Revolution of 1917 in Russia from the troops proved impossible, yet the events in Russia had little effect at first. German propaganda, mistreatment by the French and concern for their families back home, however, led to unrest that became a full-blown mutiny by May 1917, news of which the French were able to keep quiet.

To suppress the mutiny, the French transported both brigades to La Courtine, an isolated training camp in the south-central part of France. The more conservative brigade became disciplined there while the First Brigade became even more unruly. Not wanting to give the Germans any propaganda weapon by suppressing the revolt themselves, the French combed out the most loyal elements in the Third Brigade and used this force to crush the rebellion in the First in September 1917. Loyal elements of both brigades formed the Russian Legion of Honor and fought on the French front to the end of the war. The Soviets tried to make much of the “mistreatment” of these Russians in France for propaganda purposes in the 1920s.

After the war, several soldiers in the force wrote memoirs. For example, Rodion Malinovsky (1898-1967), a minister of defense of the USSR under Nikita Khrushchev (1894-1971), had been a member of the force and visited the Champagne area with Khrushchev in 1957. 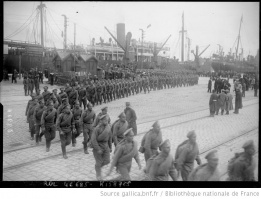 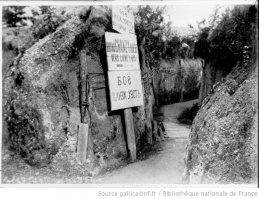 Signs in French and Russian in a trench in France, 1916 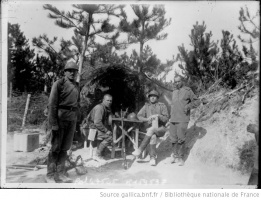 Russian troops at the front in France, 1916