Halil Kut was an Ottoman regional governor and military commander. He is best known for his role in the victory over the British forces at Kut al-Amara and complicity in the carrying out of a campaign of mass killings of Ottoman Armenians and Assyrians.

Halil Kut (1881-1957) was the uncle of Ottoman Minister of War İsmail Enver (1881-1922), although he was one year younger than Enver. After graduating from the war college in 1905, he served for three years in the Third Army stationed in Macedonia, where he joined the Committee of Union and Progress (CUP).[1] After the Young Turks led a revolution against Abdülhamid II, Sultan of the Turks (1842-1918) in 1908, the CUP dispatched Halil to Persia to foment insurrection against the Shah. In 1909, after the countercoup, he was called back to become commander of the Imperial Guard. He then received an assignment in Salonica to head mobile gendarmerie units there.

During the 1911-1912 Italo-Turkish War, Halil was among a group of young Ottoman officers who were sent to Tripoli to organize the defence against Italy. During the Balkan Wars of 1912-1913, Halil commanded a military unit. For a brief period of time before the outbreak of World War I, Halil served as chief of a gendarmerie regiment in Van. By and large, Halil’s military career before the war was confined to the role of chasing armed bands, with only limited experience of active service.

Between January and December 1914, Halil was employed as the military governor of Constantinople. For most of the following year, he served as a divisional commander of the Third Army which was engaged in the Caucasus Campaign. In November 1915, Halil came under the command of German Field Marshal Wilhelm Leopold Colmar Freiherr von der Goltz (1843-1916) who was placed at the head of the newly formed Sixth Army in Mesopotamia.

Halil’s command potential in Mesopotamia appeared simple and uninspired. He consistently allowed his field commanders to retreat after coming under fire. Only during the Battle of Ctesiphon was this evasion tactic reversed with a counterattack launched at the retreating British force. Halil’s greatest success in the war was the siege of British forces at Kut al-Amara, which ended on 29 April 1916 with the surrender of the garrison under the command of Major General Charles Townshend (1861-1924). However, the encirclement and siege operation is generally credited to von der Goltz, Halil’s senior officer, who died ten days earlier.[2] Halil was only thirty-three years old when he took over von der Goltz’ duties as commander of the Sixth Army.

After Halil refused to accept the terms of Townshend’s surrender, the British general destroyed what was left of their weapons and ammunition and surrendered unconditionally with his 13,309 men. Halil was promoted to mîr-i livâ, a military rank corresponding to major general, and became military governor of the Baghdad province. His actions earned him the title Kut’ül Amare Kahramanı, or the “Hero of Kut al-Amara”, whereupon, in 1934, he took the surname “Kut”. Only after bringing the siege at Kut al-Amara to a successful close did Halil support more aggressive tactics, proposing an Ottoman sweep into Persia. This never came to pass, however, as the British command amassed fresh reinforcements in Mesopotamia which allowed them to recapture Kut al-Amara in late 1916 and early 1917.

In early 1917, Enver ordered Halil to redeploy some of his troops to Persia in an attempt to destabilize the British-backed government there. This poorly thought-out plan impeded Halil’s ability to defend Baghdad and, in March 1917, Halil surrendered the remains of his army and handed the city over to the British. The fall of Baghdad allowed the British troops to occupy Mosul in October 1918, atoning for the previous losses. As it turned out, Halil’s success at Kut al-Amara did nothing more than delay the loss of these strategic cities. During the Turkish invasion of Transcaucasia in 1918, Halil fought in Baku against the Armenians.

Complicity in Extermination of Armenians and Assyrians↑

Halil was among the top Unionists who organized the details of the killings and supervised the Special Organization[3] units who carried out the massacres. Max Erwin von Scheubner-Richter (1884-1923), German vice-consul in Erzurum, reported that Halil’s “campaign in northern Persia included the massacre of his Armenian and Assyrian battalions and the expulsion of the Armenian, Assyrian, and Persian population out of Persia.”[4] A Turkish officer in Halil’s first expeditionary force testified that Halil “had the entire Armenian population – men, women and children – in Bitlis, Muş, and Beyazıt massacred without pity. My company received a similar order. Many of the victims were buried alive in specially prepared ditches.” Halil wrote in his memoirs of having killed 300,000 Armenians, adding that “it can be more or less. I didn’t count.”[5]

In June 1915, the Fifth Expeditionary Corps commanded by Halil accomplished the extermination of Armenians and 5,000 Assyrians and Chaldeans in Siirt.[6] In July, Halil’s expeditionary corps arrived in Muş and took necessary steps to ensure that some 75,000 villagers were surrounded by bandits, who first rounded up the men, bound them in small groups, and escorted them out of their villages to be killed. Women and children were locked up in barns doused with kerosene and burned alive. In August, a Special Organization unit supervised by Halil executed 1,500 Armenian and Assyrian soldiers of two labour battalions stationed near Urfa. In September 1917, Halil had 15,000 Armenians of Mosul executed by Kurds and çetes,[7] and had them thrown into the Tigris, bound together in small groups.[8]

Halil returned to Constantinople after the Armistice of Mudros was signed on 30 October 1918. In January 1919, he was arrested by the British expeditionary force and later exiled to Malta. He was charged before the Ottoman court martials for his complicity in crimes against humanity which would become known as the Armenian Genocide. Court clerks, who were either CUP partisans or sympathizers, sought to obstruct the investigations or to destroy, alter, or conceal any related evidence. Thanks to this and the overall permissive atmosphere of the courts, Halil managed to evade prosecution and fled from detention in August 1920.

Halil travelled to Moscow, from where he brought the gold bullion sent by Vladimir Lenin (1870-1924) to Mustafa Kemal (1881-1938) as a bonus for the return of Batum on the Black Sea coast to the Bolsheviks. As he continued to arbitrate between Bolsheviks in Moscow and Kemalists in Ankara, Halil travelled to Soviet Russia again and, in 1922, left for Germany. In 1923, after the Turkish Republic was proclaimed, Kemal’s government granted him permission to return. Halil Kut died in 1957 in Istanbul. 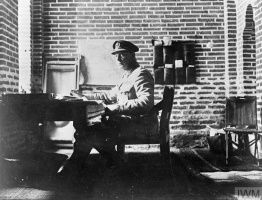 Sir Charles Vere Ferrers Townshend during the Siege of Kut