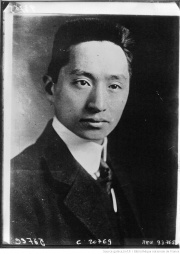 During World War I, V. K. Wellington Koo worked in the Chinese foreign ministry before becoming Chinese minister to the United States and a member of the Chinese delegation at the Paris Peace Conference. In these capacities, Koo utilized international law to defend Chinese territorial sovereignty against imperial encroachment and to pursue imperialist treaty revision.

The son of a wealthy gentry-merchant, V. K. Wellington Koo (1888-1985) received a Western education at St. John’s College in Shanghai. He attended Columbia University in the United States of America (US) as an undergraduate and graduate student, where he studied political science and international law with the intent of pursuing a diplomatic career. Under the guidance of John Bassett Moore (1860-1947), professor of international law and later first US-American judge to the Permanent Court of International Justice, Koo wrote a doctoral dissertation entitled The Status of Aliens in China.

Upon graduation in 1912, he returned to China where he worked for the foreign ministry and as an English secretary for Yuan Shikai (1856-1916), president of the newly established Republic of China. Under Yuan’s mentorship, Koo gained considerable political experience as well as opportunities to tap into his knowledge of diplomatic history and international law. In August 1914, Koo authored China’s neutrality declaration in Yuan’s failed attempt to prevent the war’s expansion to the Asian continent. After Japan’s seizure of Germany’s sphere of influence in Shandong Province in November 1914, Koo argued for China securing a seat at the future peace conference and suggested other diplomatic stratagems to prevent Japan from legitimizing its claim to the former German sphere, which included Qingdao and the Jiaoji Railroad. Two months later, Japan, in what became known as the Twenty-One Demands episode, sought China’s acquiescence to any agreement between Japan and Germany regarding the leasehold and other rights in China. Koo played a key role in leaking the secret documents to American and British diplomats in an effort to get the Western powers to pressure Japan to back down. Although China eventually agreed to most of the demands after being issued an ultimatum, Koo authored Beijing’s reply to the May ultimatum which, looking toward the peace conference, stated that China had signed under duress.

Loyalty to Yuan and obvious talent led to Koo’s appointment in August 1915 as Chinese minister to the US and Mexico. In 1917, when Beijing debated declaring war on Germany, Koo initially expressed opposition for fear that Japan would use the alliance to make further gains at China’s expense, but changed his mind after the US entered the war. He fully expected America to support China and already understood that a neutral China would have little to no voice at the peace conference.

In 1918, Koo focused on preparing for the peace conference, where he hoped to convince the powers to agree to revise treaties that infringed on Chinese sovereignty and prevent Japan from solidifying its hold on the former German leasehold in Shandong. He especially looked to Woodrow Wilson (1856-1924), with whom he met personally days after the November Armistice, and his Fourteen Points, to achieve a peace more advantageous to China.

At the Paris Peace Conference, Koo rejected both Beijing’s instructions to follow the Japanese delegation’s lead and Japan’s claim to the German leasehold by right of conquest. With assurances of support from Wilson, Koo presented China’s case to the Council of Ten. He portrayed Shandong as the birthplace of Confucius (ca. 551-479 BC) and a holy land for the Chinese. Koo further argued that on the basis of the Fourteen Points and China’s entry into World War I, neither Germany nor any other power had further claim to territory in Shandong. The speech resonated both at the conference and in China, creating a false hope that the Western powers would agree to return the leasehold to China.

With Beijing’s support, Koo pressed the powers to consider revising the imperialist system in China. He further pursued the creation of a League of Nations that gave small powers a greater voice and sided with the Japanese delegation in a failed attempt to include a racial equality clause in the League Covenant.

Although Koo convinced Wilson that Japan’s control of Shandong Province posed a threat to China, his claims that Wilson’s Fourteen Points negated the 1915 agreement with Japan as well as the secret treaties in which Britain and France agreed to support Japan’s claim to the leasehold fell on deaf ears. Britain and France refused to declare the treaties null-and-void, while Japan threatened not to join the League of Nations. Beijing further complicated matters by signing an agreement in September 1918 with Japan over the Jiaoji Railroad that used the phrase “pleased to agree”. With the allies presenting a united front in Japan’s favor and Japan promising not to infringe on China’s political sovereignty in Shandong, Wilson sided with Japan even though public opinion in America supported China.

Disappointed, Koo argued for signing the Versailles Treaty with reservations. The allies opposed any reservations for fear of further political complications, but China’s May Fourth Movement, including Chinese protests in Europe and the US, prevailed in preventing the Chinese delegation from signing the agreement. One scholar has described Koo’s actions at the conference as a “blunder” because they left little room for flexibility or compromise and led to an avoidable dispute between China and Japan. It is true that Koo placed too much hope in Wilsonianism, and that Wilson and Koo raised expectations among learned Chinese that the question would be resolved in China’s favor. Moreover, Koo’s anti-Japanese views made him distrustful of Japan’s intentions, especially his conviction that Japan sought hegemony over China.

Political Career in the 1920s↑

Koo emerged from the Paris Peace Conference a hero. In 1920, Beijing appointed him minister to Great Britain and he served on the Chinese delegation at the Washington Disarmament Conference, 1921-1922, before going on to serve as foreign minister and premier. Although respected for pursuing the elimination of imperialist treaties and recovering Chinese territory, Koo became associated with the conservative warlords that ruled Beijing and made enemies climbing the political ladder. The nominal unification of China under the Guomindang in 1928 briefly forced Koo into political exile. Nevertheless, his stance at the Paris Peace Conference in 1919 is still fondly remembered by Chinese around the world.