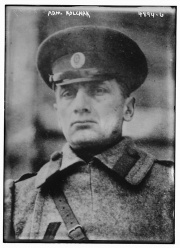 Aleksandr Vasil'evich Kolchak was a Russian admiral and political figure. He participated in the Russo-Japanese War, the First World War, and the Russian Civil War. He was one of the leaders of the White movement in eastern Russia and was proclaimed Supreme Ruler.

Aleksandr Kolchak (1874-1920) was born into a noble family of a military engineer who had distant ancestors of Turkish origin and was of the Orthodox faith. He initially studied in the sixth St. Petersburg Preparatory School, but transferred to the Naval College after three years. After graduating from the Naval College in 1894, he entered the naval service as an ensign. He served as assistant watch officer of the armored cruiser Riurik. Between 1896 and 1899 he served on the ship Kreiser as watch officer. Later, he served on the battleship Poltava. At his personal request and with the support of Konstantin Konstantinovich, Grand Duke of Russia (1858-1915) he was sent on the polar expedition of Baron Eduard V. Toll (1858-1902), where he worked as an assistant to the captain of the ship Zaria. After the conclusion of the expedition (1900-1902) Kolchak continued doing scientific research and became a member of the Imperial Geographic Society. In 1903 he organized and participated in the expedition to rescue Baron Toll, though the polar explorers were not found. However, they did manage to find a geodesic instrument, a journal and other items from Toll’s expedition. In the course of this expedition, Kolchak identified and described new geographic entities in northern latitudes.

Kolchak fought in the Russo-Japanese War (1904-1905) as a lieutenant. He commanded the torpedo boat Serdityi, then a naval battery at Port Arthur. In December 1905 he was wounded and brought to the hospital. There he was taken prisoner after the surrender of Port Arthur. The Japanese transported him to Japan, where he spent several months in a prisoner-of-war camp in Nagasaki. He was released after the end of the war and sent to Russia. In 1905 and 1906 he worked on geographic research of the north at the Academy of Sciences.

Kolchak took an active part in the implementation of military reforms and particularly in the modernization of the fleet. He played a leading role in the work of the newly formed Naval General Staff. In 1911 he was appointed Chief of the 1st Operations Department of the Naval General Staff. He repeatedly spoke to deputies of the State Duma as an expert on naval affairs and the shipbuilding program. In 1909-1910 he took part in a hydrographic expedition throughout the Arctic Ocean composed of two icebreakers, Vaigach and Taimyr.

Beginning in 1912 Kolchak was commander of the destroyer Ussuriets and then Chief of the Operations Department of the Staff of the Baltic Fleet; Admiral Nikolai O. Essen (1860-1915) was the commander. Kolchak fought in the First World War as a Captain First Rank, directly participating in many of the Baltic Fleet’s operations. He initiated the creation of a mine blockade for German ships in the Baltic. This blockade successfully stopped the German fleet from penetrating the Gulf of Riga in 1915. Kolchak temporarily commanded half a division of torpedo boats while holding a staff post. Beginning in December 1915 he became the chief of a mine division. At his initiative a successful amphibious landing of ground forces with fleet support was conducted on the coast of the Gulf of Riga in October 1915. As the head of the mine division of combat ships, Kolchak repeatedly disrupted the shipments of iron ore from Sweden to Germany. For his leadership in combat operations in the Baltic he was awarded the order of St. George, 4th Degree, in 1915 and received the rank of rear admiral in 1916.

In June 1916 Kolchak was made a vice admiral and placed in command of the Black Sea Fleet. With his arrival, the neutralization of the modern German cruisers Breslau and Goeben became one of the most important tasks of the Russian fleet in the Black Sea. Here, as in the Baltic, Kolchak used a tactic associated with mining maritime space, implementing it chiefly near the Turkish and Bulgarian coasts. As a result, the cruiser Goeben was partly damaged, and several Turkish ships and German submarines were put out of action, which prevented the enemy from activity. The Black Sea Fleet also delivered cargo to the Caucasus front by sea. After explosions in a powder magazine on the fleet flagship, the battleship Imperatritsa Mariia, Kolchak personally led the effort to localize the fire and rescue personnel and equipment, but failed to save the ship. Kolchak was one of the main initiators of the Bosphorus amphibious operation with the goal of seizing the Black Sea straits, which belonged to Turkey. For the operation the combined forces of the army and fleet were to be used. However, despite serious preparations, the operation, planned for the spring of 1917, was not realized.

The 1917 Revolution and Departure from Russia↑

Kolchak greeted the revolutionary events of 1917 with disapproval. He was one of the many commanders who did not speak in favor of the abdication of Nicholas II, Emperor of Russia (1868-1918), declining to respond. Kolchak kept his post as Commander of the Black Sea Fleet after the fall of the monarchy, but in June 1917 he voluntarily resigned due to his disapproval of the policy of democratization in military matters and the actions of the Sevastopol Soviet of Workers', Soldiers', and Sailors' Deputies. Not long before he gave up his post Kolchak had thrown his saber, the St. George decoration, into the sea during an attempt to disarm him. Kolchak was famous in Russia due to the successful military and political work in 1917 directed at averting the dissolution of the Black Sea Fleet. Certain circles viewed him as a potential ruler after the overthrow of the Provisional Government, but he evidently did not imagine himself in such a capacity.

In mid-June 1917 Kolchak received an offer from the American naval command concerning military cooperation. A month later, with the permission of the authorities, he went to the U.S. as head of a group of naval officers. On his trip across the ocean the delegation spent two weeks in Great Britain, where it familiarized itself with naval aviation, submarines, and military plants.

The delegation headed by Kolchak spent two months in the U.S. on a military diplomatic mission. The Admiral met with Russian Ambassador Boris Aleksandrovich Bakhmetev (1881-1951), President Woodrow Wilson (1856-1924), held a number of consultations about mines at the Naval Academy, and was present at fleet exercises on the battleship Pennsylvania. The delegation left from San Francisco to return to Russia via Japan.

In Japan, after hearing that the Provisional Government had been overthrown, that the Bolsheviks had come to power, and that the Treaty of Brest-Litovsk had been signed, Kolchak gave complete freedom to his subordinate officers but decided to begin serving in the British fleet. Having received a favorable reply from the British Embassy in Tokyo and a new appointment, the Admiral was sent to the Mesopotamian Front. However, upon arriving in Singapore in March 1918, Kolchak received another mission: to head for Manchuria and Siberia in order to join with and head the scattered military formations of the anti-Bolshevik forces there. This initiative came from the Russian Ambassador in China, Prince Nikolai Aleksandrovich Kudashev (1868-1925), who had managed to convince the British authorities. Arriving in Manchuria, Kolchak joined the board of the Chinese Eastern Railway, but his goal of uniting all military forces in the region was unsuccessful. In June 1918 the admiral left for Japan, where he had several meetings and contacts with Japanese, British, and French officials. He then decided to head to Vladivostok and from there to the south of Russia to search for his family and join the Volunteer Army.

While in Omsk at the beginning of November 1918 Kolchak was offered the post of War and Naval Minister of the Directory of the Provisional All-Russian Government. However, on 18 November, under pressure and threats from a group of military men and politicians sympathetic to the Kadets, the government of the Directory yielded power to Kolchak, who was proclaimed the Supreme Ruler and made a full admiral. Under Kolchak the forces, consisting of three armies (Siberian, Western, and Orenburg), were reorganized. From December 1918 through May 1919 the White forces were quite successful, attacking in the west, seizing Perm, Ufa, Sterlitamak, Orsk, Bugulma, Birsk, and a number of other cities. But then, as a result of a Red counteroffensive, the Whites began to retreat. Kolchak’s government was neither able to implement its socioeconomic policy to assist business owners, workers, peasants, Cossacks, and non-Russians, nor to solve the army's supply problems due to the changing situation at the front in favor of the Bolsheviks and the gradual retreat of the Whites from the Volga region, the Urals, and Siberia. Kolchak developed closer relations with military and diplomatic representatives of Great Britain and France. Circumstances developed such that Kolchak and his government had Russia’s gold reserve (worth more than 650,000,000 gold rubles) at their disposal. About one-third of the reserve was sent abroad to pay for military supplies and some was used for the White Army. Kolchak successfully kept the remaining money, worth about 409,000,000 rubles. After abandoning the "White capital", Omsk, the Supreme Ruler boarded his train with the gold reserve without his government, whose members had previously left for Irkutsk.

As a result of the political crisis in the White camp, when the government began negotiations with rebels in Irkutsk about their surrender on 4 January 1920, Kolchak decided to resign as Supreme Ruler in favor of General Anton I. Denikin (1872-1947), the Commanding General of the Armed Forces of the South of Russia. Kolchak also agreed that the Czechoslovak Legion, as representatives of allied troops in Siberia, would provide security for his train and the gold reserve. On arriving in Irkutsk on 15 January 1920, as a result of an agreement between the Czechoslovak command and the SR-Menshevik Political Center that had seized power in the city, Kolchak was arrested and sent to a local prison. An investigation into his case soon began. Power shifted to the Bolsheviks during the investigation. During interrogation Kolchak was very clear and did not admit his guilt. Kolchak was initially supposed to be moved to Moscow to be publicly tried there, but an order came from the Kremlin for him to be liquidated, as the retreating White forces were quickly approaching, and they demanded that Kolchak be released and the gold reserve transferred to them. Kolchak and the former Prime Minister Viktor Nikolayevich Pepeliaev (1885-1920) were shot on the night of 7 February 1920.

The Memory of Admiral Kolchak in Contemporary Russia↑

Soviet literature and art tended to depict Kolchak negatively, but he was a cult figure to White supporters in exile. Fictional images of the admiral in post-Soviet Russia have also been mostly positive. A sign of newfound interest in his personality was the opening of a memorial to Kolchak in Irkutsk in 2004, sculpted by Viacheslav Mikhailovich Klykov (1939-2006). Moreover, in 2008 a feature film was released, entitled "The Admiral" and directed by Andrei Yurievich Kravchuk.

Contemporary assessments of Kolchak's activity are ambivalent. Some researchers consider him a Russian patriot who proved to be an outstanding example as a researcher of the polar North, as a naval commander in the last wars of the Russian Empire, and as a political figure during the Civil War, when he became Supreme Ruler and headed the White movement in eastern Russia.[1] In spite of the Bolshevik victory, his attempts to oppose Soviet power and organize an effective resistance are also assessed positively. Those who hold to the other point of view consider Kolchak one of the "reactionary" leaders of the White movement who pursued an anti-popular policy accompanied by repression and terror. His strategic mistakes in the military and political spheres led to the defeat of the White forces in the Volga region, the Urals, and Siberia.[2]