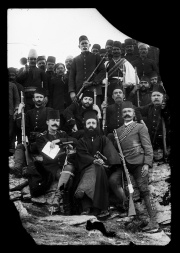 Germanos Karavangelis was the most radical proponent of Greek nationalism among the Christian Orthodox clergy of the early 20th century Ottoman Empire. Using his religious authority as a weapon in the service of Hellenism, he launched the Greek counter-guerrilla offensive in Ottoman Macedonia. During World War I, he drew on the experience he had acquired in Macedonia to convert the Greek Orthodox deserters of Samsun into a nationalist militia.

Germanos Karavangelis (1866-1935) was born in the village Stypsi on Lesbos and grew up on the opposite shore of the Steno Mitilinis, in the town Edremit (called Adramyttium in the classical period) on Asia Minor. He studied theology at the Halki Seminary and philosophy at the universities of Leipzig and Bonn. He was ordinated bishop of Charioupolis (in Pera/Beyoğlu) in 1896 and enthroned metropolitan of Kastoria in 1900.

In Kastoria, Germanos, along with the Greek diplomat and nationalist intellectual Ion Dragoumis (1878-1920), launched the Greek counter-guerrilla offensive against the Bulgarian national movement in Ottoman Macedonia in 1903. Germanos coordinated the action of the Greek guerrilla fighters in Western Macedonia and, with a weapon in his hand, took part in many of their operations. In his memories he takes pride in depicting himself as a guerrilla chieftain:

When embarked on dangerous travels, I was wearing a black English raincoat and knee-high boots … In my shoulder was pending my Mannlicher [Mannlicher-Schönauer rifle], while on my chest beneath the raincoat one could notice the bandoliers.[1]

During that period, Germanos – and more generally the Greek guerrilla organisation – collaborated with the Ottoman authorities against the Bulgarian komitadjis. Ottoman General Vehib Pasha (1877-1940) recalled in 1917: “Germanos is an old komitadji, who, in Kastorya, fought against the Bulgarian committees in collaboration with our government.”[2]

In late March 1905, Germanos instigated the massacre of Zagoritsani, a village inhabited by Macedonian Slavs committed to the Bulgarian Exarchate. There, Greek counter-guerrilla forces savagely slaughtered the population, sparing only a few supporters of the patriarchate whose names Germanos had provided.

Germanos was removed from the metropolis of Kastoria in 1907 due to the government’s intercession with the patriarchate.[3] In 1908, he was enthroned metropolitan of Amasya, a metropolis based in Amisos/Samsun. Upon his arrival in his new metropolis, Germanos attempted to create a guerrilla organization, mainly in the neighbourhood of Kadıköy/Ano Amisos.

According to Emilios Chadjigeorgiou from Kadıköy:

In 1906-7 [sic, actually 1908], when Karavangelis arrived, he was doing propaganda for Greece. He had confidence in us, the people of Kadıköy. He knew that we were brave and collaborated with us. He was coming in Kadıköy, raising his robe and showing us his wounds from the Macedonian struggle, when he fought with Pavlos Melas. We were like conspirators. We exercised with rifles Gras brought secretly from Greece for the military training of the young people of our village… Kadıköy was the only place they distributed arms.[4]

Germanos’ early attempts to form a local militia were limited in scope. When a Greek Orthodox militia was formed in 1916, its creation was not due to patriotic fervour but to massive desertion from the Ottoman army. Deserters were recruits from all religious and ethnic backgrounds and often formed small armed groups living as common bandits.

The formation of small armed groups of Greek Orthodox deserters was the opportunity Germanos was waiting for. Deserters were mobilised men and de facto in conflict with the army and the government. Hence, Germanos set out to transform these groups into nationalist guerrilla fighters:

Thanks to the long experience I had acquired during our Struggle in Macedonia, I started to shape these originally small and disordered groups [of deserters] into well-ordered and battle worthy guerrilla corps. These corps quickly multiplied. They had experienced chieftains whom I personally appointed and became true military corps.[5]

In his account, Germanos probably exaggerates the number of these guerrilla fighters, which he estimates at 20,000, claiming that they formed, during the war, a “front of the Entente behind the Ottoman lines”.[6] However, after the occupation of Trebizond in April 1916, the metropolitan brought these groups into contact with the Russian military:

The Russian Army had occupied Trebizond, but it stopped there … Therefore I sent letters to the Admiral of the Black Sea Fleet and to General Yudenich with the guerrilla leaders Charalambidis and Vasil Usta, who went secretly to Trebizond with a sailboat … asking our powerful allies to occupy Samsun and its hinterland to save the rest of the Christian population. But nothing happened … only from time to time a torpedo boat appeared off the coast, fired loosely on the city … embarked some guerrilla fighters … and brought them back equipped with arms.[7]

Although Greek Orthodox bandits were given arms and ammunition by the Russian army, Germanos’ assertion that they formed a “front of the Entente behind the Ottoman lines” is an overstatement. In fact, they scarcely, if ever, engaged with the Ottoman military – except for the pursuit detachments. Their activity was much more in line with the traditional repertoire of premodern banditry than that of nationalist guerrillas. Instead, it was the fact that the bandits had contact with the Russians that triggered a counter-guerrilla operation, commanded by Major General Refet Bele (1881-1963) and former employee of the general security department Manastırlı Bahaeddin (?-1956). In early January 1917, the two men started to forcibly displace the Greek Orthodox of the area, burning their villages and pursuing the fleeing population.

At the same time, Monsignor Germanos met in Suşehri with the third Ottoman army commander, Vehib Pasha, who proposed ceasing the displacements if the bandits accepted an amnesty proposition. Unwilling to dismiss the guerrilla forces, Germanos did not attempt to negotiate the amnesty with the guerrilla chieftains. Finally, Germanos turned to Field Marshal Ahmet Izzet Pasha (1864-1937), who intervened with the Ottoman High Command to have the forced displacements shelved in early February 1917.

Meanwhile, in late December 1916, the governor of Sivas, Muammer Bey (1875-1928), attempted to have Germanos removed from Samsun. But the latter was protected by Vehib Pasha, on the grounds that he was “drawing advantage from him in the frame of a [negotiation of] amnesty”.[8] A year later, Germanos was arrested and brought to Istanbul, where he spent some time in custody.[9]

Germanos returned to Samsun after the Armistice, resuming his effort to organise a national guerrilla force. At the same time, the Ottoman army was disintegrating and Greek Orthodox bandits were freely circulating in the region. Nevertheless, Germanos reported that Muslim bands were attacking Christian villages and disturbing the public order, willing to provoke the occupation of the region by the Allies. The result was the assignment of Mustafa Kemal (1881-1938) to Samsun in May 1919, as an inspector of the Ninth Army instructed to investigate the Christian complaints. Thus, Germanos indirectly contributed to the launch of the Turkish War of Independence.

In 1921 Germanos was sentenced to death in absentia by the independence tribunals held in Amasya – along with more than 150 other Orthodox Christians accused of high treason. To escape death, he fled to Greece, where he became the metropolitan of Ioannina. In 1924, he was appointed patriarchal exarch of south Europe, based in Budapest and later in Vienna, where he died from a heart attack, embittered by the lack of recognition for the services he had offered to his country. 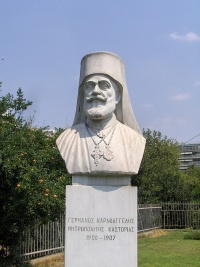