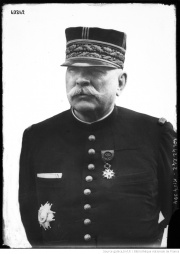 Joseph Joffre was commander-in-chief of the French army at the beginning of the First World War, which was supposed to be short. He fought to stop German progression and maintain the war effort in France over time. Despite being idolized by the people of France, he was removed from his positions at the end of 1916 due to a mixed record of success.

A colonial officer of the French Republic↑

Born in Rivesaltes, southern France, Joseph Joffre (1852-1931) entered the prestigious École Polytechnique in 1869, the youngest student of his year. In 1870, the Franco-Prussian War interrupted his classes and he was called to command an artillery battery in Paris. He was, however, never involved in action. A year later, he refused to take part in the Commune. After the second siege of Paris, he went back to his classes. He was a brilliant student and after graduating joined the Engineer Corps, where he became a specialist in fortifications and railways. He helped build several forts in mainland France, before applying his expertise, with great success, during the French colonial expeditions in Taïwan, Tonkin, Mali, and Madagascar. He oversaw the building of the naval base of Diego-Suarez under the command of General Joseph Gallieni (1849-1916). Afterwards, he was made a general himself and obtained key posts in Paris.

From preparations for war to practice↑

After fifteen years of political and military affairs and crises (such as the Dreyfus Affair, Fachoda, the Affaire des Fiches, and the First Moroccan Crisis), Joffre was named chief of the general staff during the particularly complicated Agadir Crisis (1911). The army remained on guard against politicians as Joffre reshaped the strategic orientation of the institution, exchanging high general officers and developing Plan XVII for the mobilization and concentration of French troops. After the declaration of war in 1914, the subsequent offensives of Plan XVII in Alsace and Moselle (then part of the German Empire) failed completely. Nonetheless, Joffre managed to convert his retreating army into a counter-attacking one, and was able to stop the German advance at the battle of the Marne, before the war stagnated after the “Race to the Sea” between September and October 1914. He is often credited with the line “I don’t know who won the battle of the Marne, but I know who would have lost it”.

A global vision of the conflict↑

Joffre understood the importance of the common Allied effort to end the war, which was one of the reasons why he launched several French attacks on the Western Front, whereas the Germans mainly maintained defensive positions while successfully attacking on the Eastern Front. The need for a more coherent scheme forced Joffre to organize the first Chantilly Conference with all Allied commanders at his general headquarters (6-8 December 1915). He persuaded them of the importance that the main offensive be led by the French and the British forces at the Somme, while the other allies should attack the Central Powers at the same time. However, preparations for this plan were undermined when the Germans launched an offensive at Verdun on 21 February 1916.

In the first months of the conflict, as Paris was threatened by the German advance, the French government withdrew to Bordeaux. At the time, Joffre and the GQG ensured that the total war was running smoothly. As the war continued, Joffre increasingly came under attack by both the political class – Aristide Briand (1862-1932), Georges Clémenceau (1841-1929), parliamentary and senatorial commissions- as well as by generals in the military such as Gallieni and Maurice Sarrail (1856-1929). He was accused of “caesarism” and was attacked for the way he conducted operations. The German offensive at Verdun and the capture of Fort Douaumont by a handful of Brandenburg soldiers revealed French unpreparedness. In need of guns and soldiers for the Second Battle of Champagne, the commander in chief had emptied all French fortifications. Verdun was emptied and ill-prepared for the assault, even though the stronghold was situated on the very frontline. In an effort to meet the scandal head-on, Joffre was forced to let go of one of his most ardent supporters in the army, General Augustin Dubail (1851-1934). He had already lost his main political ally in October 1915, the Minister of War Alexandre Millerand (1859-1943). His days as commander in chief were numbered.

Even though Joffre was idolized by the people of France, he was discredited by the disappointing results at the Somme and on the Balkan Front in 1916. He was the first general to be named Marshal of the IIIrd Republic in December of 1916. He was later given a diplomatic mission to the United States, while General Robert Nivelle (1856-1924) took command of the French armies on the Western Front. Even after the end of the war, he remained a very popular figure and led the victory parade of 14 of July 1919 on the Champs Élysées. He remains a controversial figure: victor of the Marne for some, others see him as responsible for mass slaughters. Nevertheless, it is undeniable that he played a major role in the final victory of the Allies during the First World War. 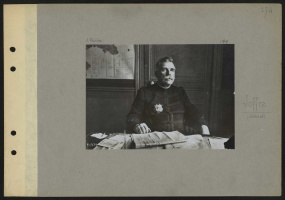 French military mission to the United States, 1916
Joffre Attending the Ninth Anniversary of the Battle of the Marne