The Inter-Allied Games were held at the Pershing Stadium in Paris, France from 22 June to 6 July 1919. Set up by the YMCA, these military Olympics were part of demobilization. The event reached beyond athletic and military goals to address diplomatic and cultural issues between the USA and Europe.

This small-scale, ad-hoc event appears strikingly disconnected from both the horrors of World War I and postwar challenges (figure 1). Although the Inter-Allied Games were never, to our knowledge, commemorated, with the main exception of a report in L’Equipe magazine on 28 December 2019, many authors like Thierry Terret have pointed out the importance and diversity of the issues at stake. 1919 was indeed, according to Pierre Milza, “in many respects, a year of symbols.”[1]

The Inter-Allied Games program included military activities (pistol shooting, tug of war, and hand-grenade throwing), team sports (baseball, basketball, cricket, soccer, rugby, and water-polo), individual sports (athletics, riding, golf, swimming, boxing, fencing, wrestling, and tennis), and also featured an Arabic “fantasia,” involving performances by the Arabic delegation (armed dancers and horsemen) and a camel race. Though the International Olympic Committee had been running the modern Olympics since 1896, they did not run the Inter-Allied Games. The idea originated with Elwood S. Brown (1883-1924) of the YMCA, a protestant organization which promoted physical education for young people. During the war, the YMCA provided human and logistic support behind the lines, as noted by Hélène Trocmé. As of December 1918, it was decided that the YMCA would fund the organization of the Inter-Allied Games, while each army would provide for their respective delegation.

Between the Stockholm and Antwerp Olympic Games↑

Set between the Olympics which had initially been planned in Berlin (Olympic Games 1916), and those to be held in Antwerp (Olympic Games 1920), the Inter-Allied Games gave athletes the opportunity for an international contest. However, their participation in these games was not recognized by official sports authorities nor were they registered as national competitors.

The Inter-Allied Games proved significant in the history of sport. The United States of America (USA) outshone France and Italy in basketball, France was victorious in rugby over the USA and Romania, while Czechoslovakia won the soccer event. The USA and Canada were the only nations to compete in the baseball games, which were followed by thousands of French people, as Peter Marquis has described. Results were consistent with each game’s respective development and new momentum in each country.

Allies Pitted against Each Other↑

The commanders-in-chief of all Allied armies were officially invited by American General John J. Pershing (1860-1948) in January 1919. 1,500 athlete soldiers – most of whom had not experienced trench warfare – were brought to Paris for a peaceful showdown. European countries – Belgium, France, Greece, Italy, Portugal, Romania, Serbia, and Czechoslovakia – joined forces with Australia, Brazil, Canada, China, the USA, New Zealand, and Guatemala, among others.

The French press described the Inter-Allied Games in a similar fashion to pre-World War I international sporting events. However, in addition to each athlete’s performance, his nationality and feats of arms were mentioned when relevant and emphasized.

As the Paris Peace Conference ran from 18 January 1919 to 21 January 1920, a showdown took place both at the negotiating table and on the sports field. As early as February 1919, Marshal Philippe Pétain (1856-1951) told his generals, “Americans regard this meeting as very important. France should be fittingly represented.”[2] Contests between French and American athletes drew considerable attention. “As soon as ‘La Guerre’ was ‘finie’ another ‘Guerre’ started, France against America.”[3]

The Inter-Allied Games took place in a civilian context, in a stadium assembled in three months by the YMCA and US navy in the east of Paris. The French sports daily L’Auto-vélo praised the construction as an “amazing feat,” noting that the YMCA “took charge and replaced our workers with 4,000 US and 300 French troops” when the workers of both commissioned French companies went on strike on Labor Day.[4] The initial budget rose from 450,000 to 2 million French francs. Upon its inauguration, the YMCA bequeathed the stadium to General Pershing, who then donated it to the French Comité national d’Éducation Physique.

Differences between “Poilus” and "Doughboys"↑

The Inter-Allied Games’ media coverage involved hundreds of pictures, including portraits (see the Rol-Agency pictures) highlighting morphological and postural differences among athletes that illustrated articles on the US delegation’s victories. André Glarner, a French journalist, noted that: “Many viewers had come out of curiosity, as to a circus, and were eventually astonished and taken in by US performances.”[5] The US athletes were impressive indeed, and French manhood had suffered from the war. Since the late 19th century, because of the loss of Alsace-Lorraine, the French educational system had included Germanic influences. The Inter-Allied Games highlighted the importance of sports in physical education, which would increase throughout the 20th century in Europe.

The US military delegation won many Inter-Allied Games events in athletics, basketball, baseball, shooting, etc. France ranked second, winning in the marathon, cross-country, rugby, golf, boxing, fencing, riding, and others. Although seemingly marginal in comparison to the human and material casualties of World War I, the games were a manifestation of deeper issues linked to World War I’s intercultural dimension. 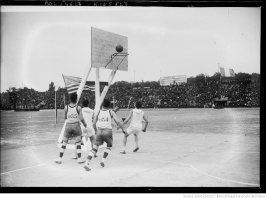 Basketball match between France and the US 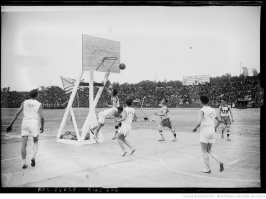 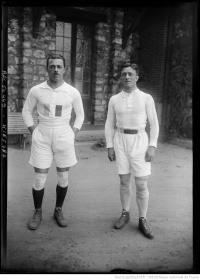 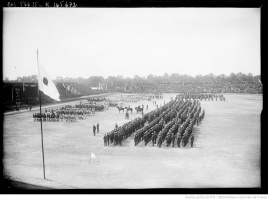 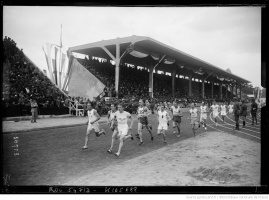