At the beginning of the 20th century, two different systems of exercise and training were internationally known: gymnastics and sport. As a result of the First World War, the boundaries between these systems were blurred. The main concern was no longer whether gymnastics or sport was the right way to exercise, but rather the issue was to prepare young men for military service.

There were two different systems of exercise and training at the beginning of the 20th century, both of them internationally known: gymnastics and sport. Gymnastics, already practised in ancient Greece, had become very popular again during the late Age of Enlightenment and the early 19th century in new stylistic versions. This was especially true in Germany, where it was known as Turnen, and as “Swedish gymnastics” in Sweden, and in Spain and France. In Germany, the teacher and activist Friedrich Ludwig Jahn (1778-1852) promoted Turnen as a national-romantic and political movement that strove for a unified German nation and liberation from the French occupation. Due to its radical political character, it was forbidden for several years by reactionary politicians and Jahn was arrested in 1819 for high treason. In contrast to Jahn, the Swedish national-romantic author and physical educator Per Henrik Ling (1776-1839) cooperated with the government and was able to establish the “Gymnastiska centralinstitutet” (Gymnastic Central Institute) in 1813 in Stockholm. With his scientific studies in the field of exercises as a basis, Ling divided Swedish gymnastics into four branches: pedagogical, medical, military and aesthetic gymnastics. Another protagonist of this era, the Spanish army member Francisco Amorós y Ondeano (1770-1848) , who took French nationality in 1816, introduced pedagogical gymnastics in France. Due to the work of people like these and gymnastics institutions, as well as migration and the colonial era, gymnastics spread over several countries and continents during the 19th century.

Even if the representatives of the different gymnastic styles often disagreed because of their particular ideological backgrounds, most were united in their opposition to Anglo-American sports, and especially to its record-seeking, high-performance competitive style, which had become more and more popular at the turn of the century. The term “sport” increasingly became an international umbrella brand in the field of exercise and training, with athletes and officials even categorizing gymnastics as one kind of sport and including it in the Olympic competition program. In the pre-war years, the Olympic Games were the most prominent international sport event. After the successful 1912 Stockholm Olympic Games, Berlin was preparing to host in 1916. But the outbreak of World War I on 28 July 1914 brought an end to these preparations.

Whilst World War I affected the establishment of the Olympic movement in a negative way, it also influenced national perspectives on the value of sport. Between 1914 and 1918, the traditional view of amateur sport as a tool for supporting character education, and professional sport as entertainment for the masses, changed, differing from nation to nation. According to historian Christiane Eisenberg, the boundaries between military and civilian sport had become blurred beyond recognition in Germany by the end of 1918. This was less the case for other nations, although participation in World War I forced some changes in their sport cultures as well; even in traditional sport nations such as England and the USA. As to the latter, the development of calisthenics – exercises with no or minimal equipment; essentially, exercising with one’s own body weight – became important for the training of soldiers. This was the driving force behind the employment of the famous football coach Walter Camp (1859-1925) from Yale University by the government for the U.S. army. Traditional American sports were increasingly promoted to strengthen patriotism, whereas German gymnastics was removed from school curricula. At military bases, sport was high on the daily agenda for recreational and training purposes. Only a year after the entry of the USA into World War I, some of the best football teams competing in the Rose Bowl Games were from the army, navy and the marines. In England, the prevailing public opinion of “duty before sport” led to a considerable limitation of the sports calendar, particularly when it came to professional sports. Amateur sport was tolerated, if not supported, as a means for boosting the morale of the soldiers and for increasing military fitness.

In continental Europe, due to World War I, the most prominent question was no longer whether gymnastics or sport was the right way to exercise. Rather, the main issue was preparing young men for military service. Most exercise programs included elements of both gymnastics and sport. In Germany, the Jungdeutschlandbund (Young German League) had been established by the Prussian Field Marshal Colmar Freiherr von der Goltz (1863-1916) in 1911. With the overall aim of preparing the youth for war through paramilitary exercises, this institution was joined by national sport federations (football, track and field, cycling, swimming) as well as the Deutsche Turnerschaft (National Association of German Gymnastics) and the Zentralausschuss zur Förderung der Volks- und Jugendspiele (National Committee for the Promotion of People’s and Youth Games). 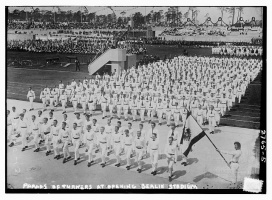 Inauguration of the “Deutsches Stadion” in Berlin, 8 June 1913