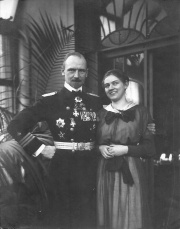 A champion of “peaceful imperialism” before the war, Humann served as an éminence grise in Turkish-German relations, helping to establish the alliance and deterring criticism of genocide. He was a close friend of Enver Pasha and later publisher of the Deutsche Allgemeine Zeitung and member of the Bund der Asienkämpfer (League of Asian Warriors).

Born in Izmir as the son of Carl Humann (1839-1896), the “discoverer” of the Pergamon Altar, Hans Humann (1878-1933) spent his early childhood in the Ottoman Empire, attending a Catholic school and speaking French and Greek until he was sent to school in Wiesbaden in 1890. He embarked upon a career in the Imperial Navy, advancing to the rank of frigate captain. By 1911, he was married to Ella Humann (1874-1928), had four children and lived in Neubabelsberg, while working in the Imperial Navy Office’s News Department in Berlin, responsible for intelligence and propaganda. From 1913 to 1917, he worked at the Istanbul embassy, first as commander of the ambassador’s naval guardship Loreley and later as head of an intelligence unit and naval attaché. Recalled to the Imperial Navy Office in 1917, he served in the Imperial Defense Ministry (Reichswehrministerium) until 1920, when he became publisher of the Deutsche Allgemeine Zeitung.[1]

Humann’s Role during and after the War↑

While Humann never held any high public office, he served as an éminence grise in Turkish-German relations, playing a vital role in establishing the Ottoman-German alliance during World War I. He exercised his influence through contacts to and patronage of important personalities, shaping public opinion through journalism and intelligence work. He supposedly owed his career in the navy to Admiral Alfred von Tirpitz (1849-1930). After his dismissal, he enjoyed the protection of Hugo Stinnes (1870-1924). He was also a close friend of Franz von Papen (1879-1969) and Ismail Enver Pasha (1881-1922) already before they came to power.

Humann’s intimate affiliation with Ottoman Minister of War Enver proved invaluable in summer 1914, when both the Entente and Germany were vying to win the Ottomans over to their respective camps. Humann served as a de facto liaison officer, transmitting German offers directly to Enver and instructing him how to negotiate with other Ottoman politicians.

From the outbreak of hostilities until his departure in 1917, Humann continued to serve as a liaison officer to clarify irritations between the two sides. He also defended the Ottoman government’s genocidal Armenian policy from criticism, especially from the 1915-1916 Istanbul ambassador, Paul Wolff-Metternich (1853-1934), whom he had removed from office.

In his correspondence, Humann clearly illustrated his awareness of the exterminatory policy against the Armenian population, but justified it due to their supposedly widespread collaboration with the Russian army. During the trial of Mehmed Talat Pasha’s (1874-1921) assassin, he publicly rebuked allegations of genocide.

Legends, transmitted by Ernst Jäckh (1875-1959) and the US ambassador Henry Morgenthau (1856-1946), claimed that Humann had spent almost his entire life in the Ottoman Empire, was more Turkish than a Turk, and had shared the same wet nurse as Enver. There is no historical basis for any of this, as the two men’s paths probably never crossed before Enver’s appointment as military attaché in Berlin between 1909 and 1911. Nonetheless, Humann was well informed about Ottoman society and had an intimate friendship with Enver that allowed him to play his crucial role in 1914. His personal commitment to Enver even continued after he was ousted: while Enver took refuge in Neubabelsberg with Humann’s sister, Maria Sarre (1875-1970), Humann arranged for clandestine support from the Reichswehr to help Enver reach the Soviet Union.

Despite amicable relations to right wing and liberal politicians, Humann never committed to a party, believing in elitist influence rather than mass movements. He was inspired by traditional conservatism and new right thinking, including the necessity of media and intelligence methods. Social Darwinism is noticeable in his opinion on Turks and Armenians. Before World War I he staunchly supported the “peaceful imperialists” that hoped Germany would claim its role as world power through educational and cultural initiatives in non-colonized countries such as China and the Ottoman Empire rather than targeting annexation or simply economic domination. He was inspired by Jäckh, founder of the German-Turkish Association. Humann did not believe such “colonization” to be detrimental to the target countries, but lauded its benefits to Turkish nationalism. After the war, he was a member of the veterans’ organization Bund der Asienkämpfer. Under his influence, the Asienkämpfer became a lobbying organization for German-Turkish rapprochement.