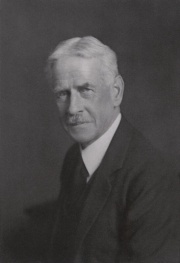 Evelyn Berkeley Howell was appointed Chief Censor of Indian military correspondence in France in the winter of 1914. The thousands of letters that he and his staff translated and transcribed constitute the largest single compilation of colonial Indian soldiers’ testimonies. The article explores why these letters were recorded, explains who Howell was and what he made of the letters he was asked to censor.

Evelyn Berkeley Howell (1877-1971) had a remarkable war-time career. He rose rapidly from a Second Lieutenant “serving in France as an interpreter attached to a regiment of Indian Cavalry,”[1] to Major and recipient of the Companion of the Order of the Indian Empire in January 1916 and eventually Revenue Secretary in British-occupied Mesopotamia in December 1918.[2] The reason for Howell’s sudden rise in position and prospects was his tenure as Chief Censor of Indian Mails in France from the winter of 1914 to December 1915 (after which Indian infantry divisions in France were diverted to Mesopotamia and only cavalry remained). Howell was the solution to a problem – a man with a long history of service in British India who could soothe fears that introducing Indian soldiers into Europe would fatally disrupt hierarchies of race and colonial military discipline. He was tasked with authoring fortnightly, supra-regimental digests of soldiers’ correspondence and an appraisal of sipahis’ (Indian soldiers) fears and concerns.

The appointment of Evelyn Howell as Chief Censor of private military correspondence was not by design. The decision to transport an Indian Corps (composed initially of two infantry divisions and two cavalry brigades) to a European theatre of war was planned from 1913. However, no contingency was ever made for the monitoring of Indian soldiers’ correspondence – beyond the ordinary unit-level censorship of a VCO (Viceroy’s Commissioned Officer or an Indian subaltern roughly equivalent to a Warrant Officer) reading out soldiers’ letters to a British Officer. The decision to implement and organize the special censorship of Indian military correspondence was taken hurriedly at the end of September 1914 after information was received that revolutionary Indian nationalists were trying to suborn Indian sipahis. Howell was charged with subjecting personal correspondence sent to soldiers to “systematic examination” in order to preserve the integrity of Indian battalions abroad from the wiles of “Indian agitators.”[3] Howell was well qualified for the task. He had spent fifteen years serving on the North-West Frontier Province (the site of constant low-intensity conflict and intermittent pacification campaigns) and was unusually proficient (by the standard of British colonial officials) in Pashto and Urdu.[4] And yet, Howell’s career as Chief Censor was one marked by perpetual frustration. Within a matter of weeks the purpose of his task had changed. Correspondence sent from soldiers was found to be far more dangerous. Letters sent from the trenches to India had rapidly increased in number and in length from January 1915 and were said to collectively emanate a chill of “fatalistic resignation” or “mental disquietude” even when any “hint of resentment or anti-British feeling” was absent.[5] The Censor and his small staff tailored their operations to try to better comprehend soldiers’ letters. They brokered extra funds, tried to find trustworthy translators for any scripts in which sipahis were literate[6] and strived to convince La Poste – the French Postal Service – to re-direct to his office in Boulogne any mail that may have been posted by Indians using civilian post offices.[7]

It proved a futile task. Howell soon complained that it was “far beyond” his “powers” to examine even a small portion of the total letters passing through his office, let alone analyze them “in detail.”[8] Letters were passed on without any changes because of the reluctance of British censors to excise letters that may have been “the last will and testament” of the writer[9] and the difficulty in deciphering inscrutable nature of Oriental turns of phrase.[10] Howell continued his work until he was replaced in the last weeks of 1915 but without his earlier energy and enthusiasm. His reports bitterly remarked that only a work of history or “some other book” could make sense of the letters his staff had collated.[11] Howell’s advice was heeded in part. When Rudyard Kipling (1865-1936) was approached to author propaganda pieces for “neutrals at home” in the United States of America by Brigadier George Cockerill (1867-1957), Director of Special Intelligence to the British General Staff, he was first handed transcriptions of Indian soldiers’ letters, proceeded to read through them, and then promptly decided to write his own fictional versions of the letters as they ought to be.[12]

Howell nonetheless remains a significant figure. It is due to Howell that a substantive record exists (now housed in the British Library) of thousands of letters to and from Indian soldiers in the First World War. It remains one of the few preserved insights into the realities of war as experienced by colonial soldiers, even though many are cropped, badly translated and poorly transcribed. This has become the point of departure for a burgeoning number of historians trying to craft social histories of the colonial Indian Army.