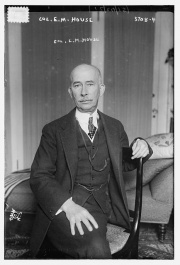 Edward House was an advisor to President Woodrow Wilson. He aided Wilson in diplomatic matters and in crafting the Fourteen Points that became the framework for the League of Nations.

Edward House (1858-1938) was an advisor to President Woodrow Wilson (1856-1924) throughout World War I. He never wanted or held a formal cabinet position, but he helped form Wilson’s cabinet. This ensured the continuation of his close relationship with the President throughout the war. He engaged in direct diplomacy and helped Wilson design the Fourteen Points that became the foundation of the League of Nations. During the Paris Conference of 1919, House organized the group of academics who became known as The Inquiry. This group provided the President with position papers and research supporting Wilson’s diplomatic efforts.

Edward House was born in Houston, Texas in 1858 to a wealthy family that was part of elite Texas society. House’s father, Thomas William House, Sr. (1814-1880), facilitated blockade runners that docked in Texas ports throughout the Civil War.

As a young man, after several years of trying his hand at various business ventures from selling drilling rights for city streets to raising funds for an electric rail line between Houston and Galveston, Edward House changed his profession to politics. One of House’s first efforts in his new field was to support James Hogg’s (1851-1906) candidacy for a second term as Governor of Texas. After the election, Hogg gave House the title Colonel in return for his effort. House would continue to use this title throughout his life. Before moving on to national politics, House helped elect three more Texas governors, Charles Culberson (1855-1925), Joseph Sayers (1841-1929), and Samuel Willis Tucker Lanham (1846-1908). His experience in Texas politics made it possible for him to gain influence in the Democratic Party at the national level.

House met presidential candidate Woodrow Wilson on 24 September 1911 but did not immediately become a public supporter of Wilson’s campaign. Rather, House worked behind the scenes to gain the Governor of Texas’ support and began to build up a campaign in his home state to support Wilson. By 1912, House was a close friend and advisor to Wilson. Once Wilson entered office, Colonel House helped him by providing key input on the selection of cabinet officers. House was now an established part of Wilson’s administration.

When European troubles intensified in the spring of 1914, House went to Europe to meet with Wilhelm II, German Emperor (1859-1941) and the British Foreign Secretary Edward Grey (1862-1933). These meetings were part of an attempt by President Wilson to maintain peace in Europe. House intended to offer the Kaiser a plan that would alleviate his fear of being surrounded by enemies in Europe. House met with the German Emperor, but this meeting had little influence over German decision-making later in the summer.

Until the United States entered the war in 1917, Colonel House worked on behalf of President Wilson to end the hostilities. Neither Wilson nor House endorsed the territorial aims of the European allied powers, believing that the European balance of power system had contributed to the outbreak of war in 1914. Wilson sent House to Europe again in 1915 to push for peace. House brought a plan to establish the freedom of the seas. The President hoped to use this common ground in order to build towards an armistice. Although the British Foreign Secretary Edward Grey received House favorably and House met with the German Foreign Minister Arthur Zimmermann (1864-1940), the peace initiative did not succeed. Due to recent successes on the battlefield such as the failed Allied landings in Gallipoli, German leaders were confident of their position and did not see a need to accept any peace offers.

House went to Europe again in 1916 and negotiated the House-Grey Memorandum, which extended an offer of negotiation to the Germans and suggested that the United States would support the Allies if Germany refused. This visit convinced House that the United States would need to enter the war on the Allied side, but the President disagreed. Wilson still wanted to focus on ending the conflict by acting as a mediator, not a participant. The new Secretary of State Robert Lansing (1864-1928), however, increasingly agreed with House.

When the United States joined the war in 1917, House worked to ensure that Wilson could influence the post-war settlement. He advised the President to begin making the United States the center of peace negotiations. In late 1917, Wilson ordered House to create a group of scholars to research the war aims of each of the participants in order to inform the President’s vision for the world after the conflict. This group of intellectuals formed The Inquiry. Their efforts influenced Wilson’s Fourteen Points as well as the President’s platform at the Paris Peace Conference in 1919. During the peace conference, House served with President Wilson on the American delegation. House advised the President not to attend the Conference because of the risk to his reputation if he were unable to carry the day. However, Wilson believed that his presence would help him direct the proceedings. House’s influence on the President began to wane during the Paris Conference due to House’s desire to achieve pragmatic diplomatic solutions and Wilson’s idealism. This strain would lead to the dissolution of their friendship.

Colonel Edward House’s work during World War I was fundamental to both America’s entry into the conflict as well as the President’s vision for the post-conflict world. Although Colonel House never held an official White House post, he was central to policy development in the Wilson administration. However, his lack of official power led to his isolation after he lost his relationship with the President. Once their friendship began to sour at the Paris Peace Conference, House’s ability to shape events degraded and he never regained his position of influence over President Wilson or any other President. House died on 28 March 1938.