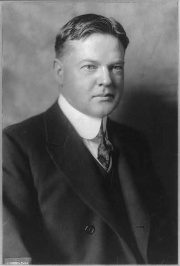 Herbert Hoover obtained political prominence during World War I through his roles as chairman of the Committee for the Relief of Belgium (CRB) and the U.S. Food Administration. Following the war, Hoover served as head of the American Relief Association (ARA) before being appointed U.S. Secretary of Commerce and later elected President of the United States.

Prior to the outbreak of World War I, Herbert Clark Hoover (1874-1964) had made a name for himself as an international mining engineer with commercial interests spanning the globe. It was from these experiences that he had gained a professional reputation as being a proficient organizer. Hoover was also a staunch and vocal critic of bureaucracy and government excess and overreach, and argued that both hindered efficiency. Later in life he even criticized official United States rationing during World War II for such reasons. Instead of relying solely upon the machinery of government to procure resources, Hoover routinely tapped into public sentiment, encouraging patriotic self-sacrifice with the goal of leveling the burdens of war across all segments of society. This perspective indelibly shaped his wartime contributions to international relief and each of the organizations he oversaw.

There were three distinct phases in Hoover’s role as a philanthropic diplomat and social engineer during the First World War. The first phase followed on the heels of the war’s opening salvos in August 1914. At the outbreak of hostilities, Hoover was living in London. As such, he was geographically, never mind financially, in a position to lend assistance to travelers who found themselves stranded in the maelstrom of war on the European continent. Along with other Americans residing in the British capital, Hoover helped to provide many with temporary housing, food, and financial loans in London so they could eventually make their way back to the U.S.

The second phase of Hoover’s wartime relief work was his role as chairman of the Committee for the Relief of Belgium (CRB). One of the key issues Hoover confronted from the onset was how to get each of the European belligerents to recognize the CRB as the legitimate philanthropy charged with providing foodstuffs to the suffering populations of Belgium, and later occupied France and Luxembourg. Yet, Hoover proved particularly adroit at couching the needs of the CRB in such a way that made the organization’s activities in fulfilling the sustenance needs of occupied Western Europe appear beneficial to each of the main European belligerents. For instance, he won over David Lloyd George’s (1863-1945) support by illustrating how the British casus belli for war would look morally bankrupt if the British prohibited the CRB from using their ports and did not guarantee safe passage to Europe in order to alleviate the food crisis. This is to say nothing of the impact such policies would have on American popular opinion, which Hoover posited as a viable threat. Hoover was similarly able to convince the German occupation authorities to acquiesce to his demands by pointing out that the CRB relieved Germany of its obligations to feed those innocent populations that fell under its occupation. Likewise, the failure to grant the CRB unmolested access to Belgium could be viewed negatively in the eyes of an increasingly judgmental American public.

Hoover was not only instrumental in negotiating access for the foodstuffs to be delivered to the German occupied territories of Western Europe. Using the press, Hoover played a central role in mobilizing popular sentiment about the alarming food shortages in Belgium, thus spurring large donations to cover the costs of needed sustenance items. Once private sources dwindled, Hoover turned yet again to the belligerent governments, taking an active role in brokering subsidies for the CRB’s continued efforts. The work of the CRB, however, was punctuated with a seemingly endless series of hurdles. Beyond the struggles inherent in negotiating with the warring European governments, Hoover had to routinely navigate both the competing visions of how philanthropic relief efforts should be conducted, as well as the individual political aspirations some of his partners and competitors had. One such incident occurred in November 1914 when the Rockefeller Foundation announced its own plans to aid those that fell under German occupation. Through shrewd maneuvering between political partners and opponents, coupled with the power of the press and public opinion, Hoover was eventually able to stave off the threat that the Rockefeller Foundation plans posed to his burgeoning relief organization. In other instances, staking his growing reputation, Hoover would feign the threat of his own resignation from the CRB in order to manipulate others into conceding to his demands.

Hoover’s third major contribution to wartime relief efforts came after the U.S. declaration of war on Germany in April 1917. No longer a citizen of a neutral state, Hoover soon stepped down from his post, recognizing that the legitimacy of the CRB in large part resided in the philanthropy’s neutrality. However, his organizational acumen was quickly put to use when President Woodrow Wilson (1856-1924) appointed him to head up the U.S. Food Administration. In a symbolic move to demonstrate the personal sacrifice required by all Americans, Hoover refused to take a paid salary. Hoover’s name quickly became eponymous with U.S. efforts to redirect food resources to feed the millions of soldiers preparing to be deployed to Europe and concurrently contribute vital foodstuffs to America’s allies. Espousing that “food will win the war,” Hoover once again tapped into feelings of patriotic self-sacrifice to encourage Americans to conserve, avoid waste, and limit consumption of various food products. To “Hooverize” became a catchphrase used amongst Americans when discussing food preservation efforts. Such values were perpetuated in a massive press and educational campaign, which aimed to teach Americans how to voluntarily alter their consumption habits, and as such, take an active role in bringing about victory. Production was likewise stimulated through a series of price controls and loans provided to U.S. farmers to encourage increased output of needed foodstuffs. International price controls on major agricultural goods, such as sugar and other necessary commodities, were also brokered amongst the Allies.

Relief efforts did not end with the Armistice, as food remained in short supply on the war-ravaged European continent. Shortly following the end of the war, Hoover once again returned to Europe to lead food relief efforts as director general of the American Relief Association (ARA). In this role, Hoover helped to direct necessary foodstuffs not only to the starving populations of Western and Central Europe, but also to the famine stricken areas of Bolshevik occupied Russia. He was also a proponent of using any post-war funds remaining from the CRB to establish a series of educational foundations with the purpose of fostering future industrial and scientific research. One of the U.S. based foundations that grew from this idea contributed to the rebuilding of the University of Leuven in Belgium during the 1920s. Building on this trend, Hoover began the Hoover War Collection in 1919 at his alma mater, Stanford University, largely in order to document the experience of humanitarian relief during the war. The Hoover Institute and Library on War, Revolution and Peace have since expanded upon this initial vision.

General John Joseph Pershing (1860-1948) described Hoover as the “the food regulator of the world,”[1] while others have called him the “Napoleon of mercy.”[2] Still others have suggested that as a result of his central role in the CRB, leadership of the U.S. Food Administration, and supervisory role in the ARA he may have contributed to saving more human lives than any one else in history. In Hoover’s words, his start in public service during World War I was “the slippery slope”[3] to an increasingly public life and political career that eventually brought him to the White House. Indeed, he used his experiences during the war as one of his key campaign points. Herbert Hoover played a central role in building a relief organization whose scale and reach was unprecedented, arguably setting the tone for U.S. relief activities ever since.