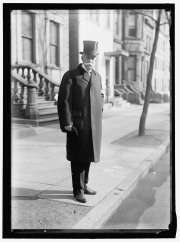 After working first as a lawyer and legal scholar, Oliver Wendell Holmes, Jr. accepted positions on the Supreme Judicial Court of Massachusetts and the United States Supreme Court. As a Supreme Court justice Holmes wrote opinions that shaped the debate on civil liberties, particularly in regards to free speech.

Oliver Wendell Holmes, Jr. (1841-1935) was a pivotal figure in the maturation of the American legal system. Holmes, who entered Harvard Law School in 1864 and passed the Massachusetts bar in 1867, worked as a lawyer in Boston for fourteen years. During that period, Holmes revised Kent’s Commentaries (a compendium on American laws), edited the American Law Review, and lectured on the fundamentals of the legal system. Early in his career he evidenced a preference for the study rather than the practice of law.

This early scholarship established Holmes’ reputation as a first-rate legal mind. Political connections also ensured that he received beneficial appointments. After working briefly in a teaching position at Harvard Law School, he accepted a position with the Supreme Judicial Court of Massachusetts in 1882 and, in 1902, an appointment to the United States Supreme Court.

As a Supreme Court Justice, Holmes was often at odds with his fellow justices, and he became known as the Great Dissenter for authoring judicial opinions that differed from the opinions written by the Court’s majority. His opinions on the right to free speech during wartime were a particularly significant point of conflict. The Supreme Court first addressed the subject of free speech in Schenck v. United States (1919), heard after the armistice put an end to the fighting. Holmes, writing the majority opinion, upheld the conviction of a socialist named Charles Schenck, who had violated the Espionage Act by distributing materials in 1917 that encouraged draftees to resist conscription. Holmes argued that the government could lawfully restrict rights to free speech in moments of “clear and present danger.” Later that year, the Supreme Court again addressed the issue of free speech during wartime in Abrams v. United States (1919).[1] In this case, Holmes dissented from the majority opinion. He argued that the defendants, who had distributed leaflets in 1918 that denounced the deployment of American troops and called for an end to weapons production in the United States, had not violated the Sedition Act and were protected in their rights to free speech.

For Holmes the difference between these two cases rested on intent. In the first case, Holmes believed that Schenck intended to disrupt the draft so national defense needs justified abridging his rights to free speech. In the second case, Holmes argued that there was no definitive evidence that the defendants in Abrams intended any particular crime against the nation or presented an imminent danger. Accordingly, their rights to free speech deserved protection. Taken together, these cases revealed that Holmes believed that the government had a right to restrict free speech in times of war but that such restrictions must be limited to moments when individuals presented an immediate and obvious threat to the existence or the security of the nation.

Holmes continued to sit on the Supreme Court until 1932, when he resigned due to failing health. He died three years later. However, the key opinions that he wrote continue to resonate today. They are memorialized on the Internal Revenue Service building in Washington, D.C. and have even been subsumed into popular culture. Most Americans, for example, are familiar with the dangers of “shouting fire in a crowded theatre,” a paraphrasing of his decision in Schenck v. United States. His legacy also shapes legal doctrine today as justices continue to debate the balance between free speech and national security and to build from the precedents set in his work on civil liberties.