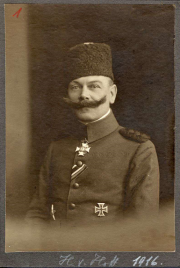 This article is about the career of Heinrich Leonhard Emanuel von Hoff under the Ottoman state. As a German military officer, he played an active role in the local branch of Stuttgart’s German Youth Associations. During the First World War, the Ottoman state appointed von Hoff as General inspector of Ottoman Youth Organizations.

Information about von Heinrich Leonhard Emanuel von Hoff’s (1868-1941) life is very limited. He played an active role in the German Youth Associations in Stuttgart’s local group before World War I. Beyond his military service, he worked as a specialist in the fields of physical education, hygiene education, and military education. After the Great War broke out, von Hoff was assigned as a colonel on the Western Front. On 19 January 1916, he started his duty in the Ottoman Ministry of War as a colonel. On 5 February 1917, he was promoted to general major in the Turkish army.

A Brief History of the Ottoman Paramilitary Youth Organizations↑

The Ottoman Youth Organizations (Osmanlı Genç Dernekleri) were paramilitary youth organizations established in 1916 under the Ottoman Ministry of War. They followed the example of their contemporary German counterpart, the German Youth Associations (Jungdeutschlandbund).

The Ottoman Paramilitary Youth Organizations were rooted in the Turkish Power Association (Türk Gücü Derneği), a sub-organization of the Turkish Hearths Association (Türk Ocağı), which supported the Committee of Union and Progress (CUP) in 1913, after the defeat in the Balkan Wars. Under İsmail Enver Pasha’s (1881-1922) initiative, this association was re-organized on 27 May 1914 under the name of the Ottoman Power Associations (Osmanlı Güç Dernekleri). Since its membership was largely limited to youth, its name changed to the Ottoman Youth Organizations (Osmanlı Genç Dernekleri) on 17 April 1916. In contrast with the previous organizations, participation in this new association was mandatory. Even though its effectiveness was limited and controversial, all youth scouting activities were united under this organization. Its goal was to gather all Muslim and non-Muslim male Ottomans, between the ages of twelve and twenty, to nurture a generation of youths who were skilled, hardworking, healthy, powerful, honest, morally upright, and obedient as well as full of love for their nation and homeland.

The Ottoman state relied on foreign support to supply qualified staff to develop the paramilitary organizations. Before the Great War, because of the liaison between the Ottoman Empire and Britain, the Ottoman government, under the rule of the CUP, appointed the British specialist Harold Parfitt (1881-?), who had led scouting organizations in Belgium since 1909, to found a scouting house in the Ottoman Empire. When it entered into an alliance with Germany, the CUP appointed German specialist von Hoff to role of advisor-trainer and general inspector on the suggestion of Marshal Colmar Freiherr von der Goltz (1843-1916), who had been working in the Ottoman army since 1883.

In comparison with the previous organizations, the Ottoman Paramilitary Youth Organizations paid attention to written, verbal, and visual communication during its educational activities. The Youth Organizations published twenty-six issues of the Journal of Ottoman Youth Organizations (Osmanlı Genç Dernekleri Mecmuası) between 1917 and 1920. Von Hoff wrote articles about population statistics in order to easily provide demographic records and to track developments in general manners, child rearing, mothers’ and women’s education and similar subjects in the provinces. In addition, he wrote a booklet entitled Sanitation principles and what to do during accidents and sickness (Hıfzısıhha Kavaidi ve Hastalık, Kaza Vukuunda Yapılacak Tedabir), the purpose of which was to give practical information about contagious diseases, accidents, and health and hygiene habits to young people behind the frontlines.

In August 1916, von Hoff made a twenty-five day trip through Anatolia and a five-day trip in Rumelia with Selim Sırrı (1874-1957), the inspector of Youth Associations Schools. During these tours, he held conferences about the purpose of the association, its difference from scouting for boys, and how training must be conducted. The promotion of the activities of the Youth Organizations also benefited from educational films brought from Germany.

The relationship between the government of the CUP and the Youth Organizations became problematic in the second year after its establishment. As evident from the sentence “the education of the nation is not political but a national matter…”[1] published in the first issue of the journal, von Hoff wanted the Youth Organizations to be free from politics and especially from the intervention of the CUP. From spring 1917, the CUP tried to use the Youth Organizations as a tool for its own paramilitary organizations. However, von Hoff and other administrators of the association were against the politicization of these organizations and resisted to work on behalf of the CUP. In order to solve this problem, von Hoff met with Dr. Bahattin Şakir (1874-1922) who held a powerful position in the Teşkilat-ı Mahsusa, the intelligence organization of the CUP government. Von Hoff told him, “if politics were involved, the purpose would be totally changed. I cannot pursue politics under the roof of a civil organization.”[2] On 29 August 1917, the Ottomans dismissed von Hoff from his duties and sent him back to Germany. 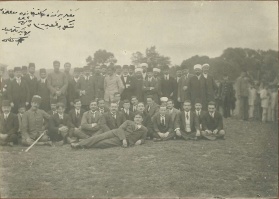