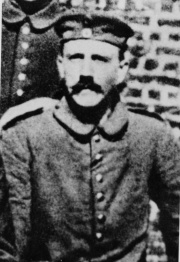 After the First World War, Hitler created a mythical account of his war years for political gain. This account was a far cry from the realities of his war experience on the Western Front.

During the First World War, Adolf Hitler (1889-1945) served first as an infantryman and then as a private in the 16th Bavarian Reserve Infantry Regiment, also known as List Regiment. An Austrian citizen and erstwhile draft shirker, Hitler volunteered to serve in the Bavarian army in August 1914. Following his baptism of fire in October 1914, Hitler became a dispatch runner for regimental headquarters. Highly decorated, twice injured, and known to his superiors for his conscientious service, Hitler nevertheless was seen as an “Etappenschwein”, or “rear-area pig”, by many front line soldiers of his unit, as his position only rarely required him to be exposed to the first line of fire.

After World War One↑

Hitler returned from the war with fluctuating political ideas and was still seen by his immediate peers as a well-liked loner. Hitler’s shifting political ideas, which in the immediate aftermath of the war probably oscillated between collectivist left-wing and right-wing ideas, were structured by an unsophisticated support for Pan-German anti-Habsburg ideas, as well as by a rejection of what he called “the inner internationalism” of German society. By that he may have meant Catholic clericalist, capitalist, socialist, or particularist tendencies, or a combination of all four. Whatever anti-Semitic views Hitler may have harboured during the war, they had not been important enough for Hitler to voice them openly. Prior to 1933, the overwhelming majority of the List Regiment’s veterans shunned Hitler and his party.

After the war, National Socialist propaganda created a mythical account of Hitler’s war years, according to which Hitler was a typical product of his regiment, and contended that National Socialism was born in the trenches of the First World War. Hitler, as the claim went, was politicized and radicalized during the war. Hitler continually changed his war account for the rest of his life to meet the respective political needs of the day. While in power, his wartime service was his favourite topic of conversation. During the Second World War, Hitler looked back to his time on the Western Front for inspiration, trying to learn the lessons of Germany’s experience in the First World War.