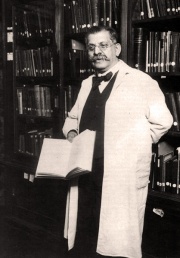 Hirschfeld, Magnus
Sexual scientist and reformer
Born 14 May 1868 in Kolberg, Prussia
Died 14 May 1935 in Nice, France

Magnus Hirschfeld was one of the most important sexual scientists and reformers in the German Empire and the Weimar Republic. He acquired international fame by founding the Scientific-Humanitarian Committee (Wissenschaftlich-humanitäres Komitee) in 1897. This was the first organisation worldwide to publicly speak out for the tolerance of homosexuals in society. Hirschfeld's most influential theory is the two-tier theory (Zwischenstufentheorie), according to which man and woman are merely opposite poles on a scale of almost infinite intermediate levels of sexuality. In 1918, Hirschfeld founded the Berlin “Institute for Sexual Sciences”, regarded as the symbol of sexual liberalism of the Weimar era.

The continuous trait of Magnus Hirschfeld's (1868-1935) work was his struggle against paragraph 175 of the German penal code. His decisive argument was based on natural law, i.e. that homosexuality was present at birth and not conditioned by society. Therefore, it is a phenomenon that is neither curable nor punishable. Because Hirschfeld hardly took into account social influences on sexual identity, his theory remains controversial until this day. Drawing on Hirschfeld's work, the Scientific-Humanitarian Committee (SHC) organised several petitions to the Reichstag, from imperial days until well into the Weimar Republic, with the aim of reforming § 175. Of course, the ultimate goal was to improve life in general for what Hirschfeld called the “Third Sex”. Hirschfeld's research received major public attention from 1907 until 1909, when Maximilian Harden (1861-1927) proposed him as a court-appointed expert in the Eulenburg scandal. Hirschfeld caused a sensation by drawing a line between friendship and love between men. He also diagnosed “homosexuality, unknown to the man himself” in the case of General Kuno von Moltke (1847–1923), commander of the city of Berlin. This popularised the term and concept of homosexuality in the German language.

During the First World War, Hirschfeld's scientific research reached a standstill. He worked as a doctor in a field hospital, but was also repeatedly called to court as an expert for sexual questions in court martials. An under-researched source on Hirschfeld’s experiences during and after the First World War is his “Die Sittengeschichte des Weltkrieges”, published in two volumes in 1930, with about 1,400 pages of text and 1,000 images. This monumental study mainly deals with the effects of World War I on social and cultural notions of love and sex. It also takes the rapid emotional changes in gender constructions and their political interpretations into account, especially with a view to racism, anti-Semitism, and political violence. Hirschfeld’s experiences in the First World War seem to have had an impact on his research interests in the Weimar Republic. He was one of the first sexologists who became interested in trans-people (transvestites and transsexuals) and explored them with a view to depathologising most trans identities. This might be due to experiences with cross-dressing and uniform fetish during the war years 1914-1918, both at the front and at the home front.

For Hirschfeld, the “Roaring Twenties” of the Weimar Republic began with an assassination attempt in Munich in 1920. His radical right-wing assailants beat him savagely, accusing him of being the man who introduced homosexuality in Germany. The following years carried Hirschfeld to the peak of international fame. His Berlin Institute for Sexual Sciences attracted a number of famous American and British visitors, including Christopher Isherwood (1904-1986). Isherwood recounts his experiences in his book “Goodbye to Berlin” (1939). With his “World League for Sexual Reform”, which he founded together with Auguste Forel (1848-1931) and Havelock Ellis (1859-1939), Hirschfeld encouraged the international networking of sexual scientists. He also organised several international conferences in the 1920s.

In 1935, Hirschfeld died in exile in Nice, France, after his institute had been demolished by the National Socialists (1933).