In 1915 the Germans built an electric fence along the Belgian-Dutch border, consisting of three lines of wires which were intended to stop all disturbing border activities that might severely harm the military operations and authority of the occupier.

Reasons for Building a Fence↑

As The Netherlands were neutral during World War I, the Belgian-Dutch border was a space suspended between war and peace. However, the German army faced many difficulties trying to avoid border crossings. The occupiers could not tolerate that 1 million Belgian civilians fled to the Netherlands to escape the atrocities of war since fugitives might be spies, smugglers or even potential workers in the allied war industry. More than 30,000 Belgian war volunteers succeeded in going to the Netherlands, Great Britain and France to join the Belgian army at the Yser frontline. The allied intelligence services, based in the Netherlands, had more than 6,000 agents at their disposal in occupied Belgium. Some agents passed many secret messages to Holland on a weekly basis. As the German post service administration censored all written correspondence, secret organizations such as Le Mot du Soldat (The Word of the Soldier) had organized clandestine postal networks. Hundreds of thousands of letters for and from the soldiers at the frontline crossed the border, following the same route as the war volunteers. Many German soldiers deserted. Belgians, Dutchmen and Germans smuggled because basic foodstuff was insufficiently available in Belgium. All these activities inspired the Germans to build an electric fence at the Belgian-Dutch border in April-May 1915.

The Fence along the Border↑

It was their strategy to cut off the population and detain them inside their own country thus paralyzing the Belgians and gaining control and influence over all actions carried out in occupied territories, especially near the border. On the other hand, as Wim Klinkert and Maartje Abbenhuis state, the Netherlands benefited from the fence as it was an indirect help against all kinds of illegal intrusions that could harm the neutrality of the country. The electric fence, with a 2,000-volt tension, was flanked at both sides by a second but not electrified fence, along the whole border from Knokke to Aix-la-Chapelle. The distance between the fences varied from 1.5 to two or more meters. However, the fence was adjusted to the landscape and site-specific needs and challenges: under certain circumstances, it might have had four or five electrified wires; in another situation it might have been eight or more. Back then, there were no electric power stations yet; electricity was so new it was practically unknown to the population. Power came from factories or small generators near the border (Aix-la-Chapelle, Kaulille, Lommel, Merksem/Kapellen, Zelzate).

The fence was guarded day and night, mostly by Landsturm guardsmen or patrols. Nobody could access the technical installations in the Grenz- or Todesstreifen (border or death zone), a zone of several hundred meters lining the Belgian side of the fence. On the eastern side of the fence (Scheldt/Aix-la -Chapelle) the Germans had built Schalthäuser (connection cabins) in intervals of 500 meters to several kilometers, where they had also installed electric devices to manage the power. On the western side (Scheldt/Knokke), these devices had mostly been stationed in confiscated houses. The fence had been built near the borderline, always on Belgian territory; when the borderline ran along a particularly wavy route, the Germans left a kind of "no man's land" between the border and the fence, which often encompassed whole villages. In other places, the fence would run through the center of a village, for example in Koewacht and Overslag.

For strategic as well as practical purposes, the occupier inserted gates in the fence, which functioned either as Militärdurchlässe (gates for military purposes) or Zivildurchlässe (gates for civilians). After receiving authorization from the Kommandantur, a civilian could go to Holland under exceptional circumstances, for example to visit an ill parent or to attend a funeral. In all other cases, however, it was absolutely forbidden to cross the border. To continue their activities, many of those in the Belgian resistance developed strategies to cross over. Probably the most commonly used method was bribery of the German guards or patrols near the border. There were also more active techniques to confront the fence and the guards, and some people indeed succeeded by sneaking over, under or between the wires. However, there were also many victims: more than 1,000 persons have been listed so far as having died at the fence, whether by electrocution or by having been shot by the guards. After the armistice, the fence was immediately demolished by the locals, leaving no traces of the deadly wires. 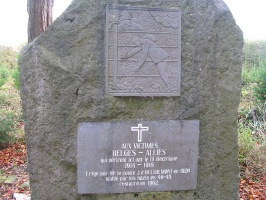 Memorial stone to the victims of the high voltage fence