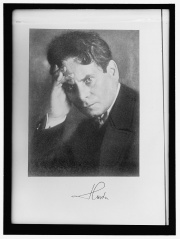 Maximilian Harden was one of the leading publicists and intellectuals both of the German Empire and of the early Weimar Republic. He achieved international fame as the originator of the Eulenburg Scandal. In the First World War, Harden was one of the most important intellectuals to demonstratively turn away from the chauvinist “Ideas of 1914”. Instead, he became a staunch advocate of the German peace policy. After 1918, he was subjected to fierce anti-Semitic hate campaigns.

Under Otto von Bismarck's (1815-1898) protection, Maximilian Harden (1861-1927), born in Berlin under the name Felix Ernst Witkowski, rose to become one of the leading journalists and intellectuals of the Wilhelminian Empire. He was the owner and editor of the avant-garde journal Die Zukunft (The Future), which was critical of the monarchy. The disclosures in his paper were read worldwide between 1906 and 1909, causing the Eulenburg Scandal. Prince Philipp Eulenburg-Hertefeld (1847-1921), the closest friend of Wilhelm II, German Emperor (1859-1941), had gathered around him an unofficial “peace party”, which exerted considerable influence at court. Harden claimed that Wilhelm II had been under the political influence of the homosexual camarilla of his favourite courtier, Prince Eulenburg. This peace party, so Harden argued, had maneuvered Germany into international isolation. The Eulenburg Scandal and the Daily Telegraph Affair shook the Prusso-German monarchy, with the result that Wilhelm II, previously omnipresent, only made few public appearances after 1908/9. The peace party within the Wilhelminian elite had been effectively destroyed and its influence completely shattered as a result of the ensuing public outrage. It was this party that had barred any attempts at war in the First Moroccan Crisis of 1905/6, and it had even worked towards reconciliation with France, offering the return of Alsace-Lorraine.

During the war, Harden changed from a bellicose supporter of the “Ideas of 1914” to one of the primary critics of German war policy. He soon became a strong advocate of peace. His article “If I were Wilson” (Die Zukunft, 22 April 1916) received considerable attention both in Germany and the USA. Harden was the first German publicist to call loudly for Germany to accept the proposals of the American president Woodrow Wilson (1856-1924), which were intended to bring an end to the war. Despite his sometimes harsh critique on German politics and social life, Harden managed to publish his Zukunft for most of the war years. When Germany turned against the conditions of the armistice and the Treaty of Versailles, Harden was one of the few public personas to speak out for both settlements. He argued that they were still bearable and were a basis for a political, economic and moral recovery for Germany in international relations in the next decades. In consequence, his journal Die Zukunft lost not only more and more readers, but also political influence.

In 1918/19, Harden was considered as a member of a German peace delegation, or even for the post as ambassador to the USA. He himself had always hoped to direct German foreign policy in some way. At a discussion in Magnus Hirschfeld's (1868-1935) Berlin “Institute of Sexual Science”, Harden expressed regret at having fought against Eulenburg and his “moderating influence”, as this was decidedly lacking in the summer of 1914. Harden's political ambitions were disappointed when Walther Rathenau (1867-1922), formerly his close friend, became foreign minister in 1922. Following Rathenau's appointment, Harden did not cease to attack him bitterly in his paper. Only a few days after the murder of Rathenau, the Organisation Consul also made an assassination attempt on Harden, which he barely survived. After this close call, he stopped the publication of Die Zukunft and moved to Switzerland, where he died in 1927.

For the National Socialists, Harden embodied the dangerous Jewish intellectual, especially because of his peace activities during the First World War. At his death in 1927, the Angriff published a necrologue by Joseph Goebbels (1897-1945):

“Maximilian Harden was put to death by pneumonia. So one of the basest and most infamous individuals who ever brought Germany to the brink of doom has departed this life. Maximilian Harden is the type of scribbling Jewish beast who abuses the hospitality of his host nation recklessly and unconditionally and pursues his eternal instinct to destroy...We mourn the death of this man only in that it has robbed us of the possibility to settle accounts with Isidor Witkowsky in our own way.”[1]

Accordingly, the historiography and propaganda of the “Third Reich” depicted Harden as one of the most dangerous Jewish corruptors of the German people.