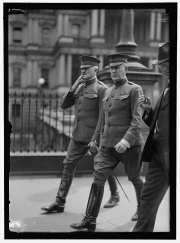 Although born in Illinois, James G. Harbord (1866-1947) spent his formative years in Americus, Kansas. After graduation from Kansas State University in 1886, Harbord promised a fellow student that he was going to “be a soldier and I’m going to work to the top, if possible.”[1] He failed the examination for entrance to West Point, but undaunted, enlisted in the army as a private.

“Jimmie” Harbord quickly became Quartermaster Sergeant and then a Second Lieutenant during the Spanish American War, proving to be a voracious reader with a remarkable memory. Critical in Harbord’s development were his thirteen years in the Philippines, recruiting and training the Philippine Scouts. During this time, he perfected a successful style of command and established lasting relationships among his fellow officers, that would became significant in the coming years. He earned a promotion to the rank of major as the First World War began in 1914.[2]

General John J. Pershing (1860-1948) noticed Harbord’s talents and chose him as one of his staff officers on the Mexican border in 1916, and in 1917, brought him to France as his Chief of Staff. Pershing said of Harbord: “I wondered why a man of his type would have gone into the Army as a private”. A reporter noted of Harbord:

It seemed more in keeping with his mentality if he had won a scholarship at college and become a lawyer and a judge - until I saw him in command of troops, when I understood he went into the army because he was first of all by nature a soldier.[3]

As Chief of Staff, Harbord was among the first officers to arrive in Europe in May 1917 with the fledgling American Expeditionary Force (AEF). In August 1917, he earned promotion to Brigadier General and began work on the structure, training, and buildup of the AEF. In the spring of 1918, the 4th Marine Brigade, 2nd American Division, was surprised to learn that a medical board had relieved their commander, Brigadier General Charles A. Doyen (1859-1918) of his post. Harbord jumped at the chance for a field command. According to Harbord's memoir, Pershing informed him that:

He could give me no better command in France then to let me succeed General Doyen with the Marines and I agreed with him. After much reminiscences of the past, and some dreaming of the future, it was agreed that I should have the Marine Brigade... .[4]

Harbord led his Marine Brigade as part of the French XXI Corps, 6th Army into their first major battle in June 1918 at Belleau Wood. By singling out the Marines, journalists initially defied censorship, identifying army units, which engendered much acclaim for the Marines. Their casualties, however, were severe: 4,298 killed and wounded, and a total of 8,251 2nd Division casualties overall. In honor of the 4th Marine Brigade’s sacrifice, General Jean Marie Joseph Degoutte (1866-1938), commander of the French 6th Army, ordered the name of Belleau Wood be changed to Bois de la Brigade de Marine. On 26 June 1918, Harbord earned promotion to Major General and took command of the American 2nd Division. Between 17 and 26 July 1918, Harbord led his new command in the Aisne-Marne Offensive at Soissons as part of the XX Corps French 10th Army. Division command proved challenging for Harbord, resulting in a confused march to the battlefield and subsequently, frontal assaults across open terrain, applying few lessons learned from the carnage at Belleau Wood. Again, American losses were severe in the assault on the German salient, amounting to 4,392 men killed and wounded in the 2nd Division. However, the offensive proved successful.

Service of Supply and the End of World War I↑

At the end of July 1918, Pershing reassigned Harbord to rescue the floundering American Expeditionary Service of Supply (SOS). The SOS was performing so poorly that Secretary of War Newton D. Baker (1871-1937) considered dividing Pershing’s command into two equal entities, the SOS and the Field Armies, and dispatching a new commander to rebuild the SOS as Pershing’s equal. In perhaps his greatest contribution to Allied victory, Harbord reenergized the poorly performing SOS and molded his command into a vital force for supplying the struggling American offensive in the Meuse-Argonne in the fall of 1918. He remained in command of the SOS until 25 May 1919, when he returned to Pershing as AEF Chief of Staff. Harbord also served as the Head of the American Military Mission to Armenia in 1919.

After the war, Harbord returned to the United States and took command his old 2nd Division at Camp Travis, Texas. When Pershing became Army Chief of Staff, Harbord went to Washington to serve as Pershing’s assistant in 1921. After nearly thirty-four years of service, Harbord retired on 29 December 1922. He died in 1947 and is buried in Arlington National Cemetery.