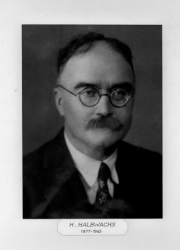 Declared unfit for military service, sociologist Maurice Halbwachs worked under Albert Thomas at the Ministry of Munitions. His work on memory (unwittingly) enabled reflection on the influence of the war.

Sociologist Maurice Halbwachs (1877-1945) was from an Alsatian family that had embraced France. Declared unfit for military service, he was bitter about not being able to fight in the great patriotic war. However, like many Ecole Normale Supérieure alumni, he worked in the cabinet of Albert Thomas (1878-1932), the socialist minister of munitions. For Halbwachs, the war was an abyss in which the extreme modernity of representation, like cinema for example, was channelled to benefit the technical and economic modernity of total mobilization.

This made his behaviour in the following years particularly interesting, when, as a professor at the reconquered University of Strasbourg he became a member of the first Annales team alongside his historian friends Marc Bloch (1886-1944) and Lucien Febvre (1878-1956). In The Social Frameworks of Memory (originally published in French in 1925), he turned the page on the Great War just as he invented collective memory. Indeed, Halbwachs was interested in the social conditions that enable the creation of memories. All individual memories form in a social framework and public events leave a great impression on the people who experience them - particularly youth in the process of forging their adult identity. The implications are obvious for both veterans (mostly young in 1918) and for their children, born during and especially just after the war and raised in the midst of its heroic and/or tragic memory. And yet the recent war experienced by Halbwachs, a former student of Henri Bergson (1859-1941) and Émile Durkheim (1858-1917), was totally absent from his work, as though he wanted to repress the tragic past.