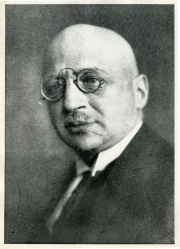 Haber was one of the most important German chemists. He won the Nobel Prize in Chemistry 1918 for his invention of ammonia synthesis, which was important for both the production of fertilizer and ammunition. During the First World War, he was the driving force behind the development and improvement of chemical weapons for the German troops. In 1933, Haber resigned his directorship and left Germany in protest against National Socialist racial policies.

Haber as a Scientist↑

In 1909, Fritz Haber (1868-1934) developed and sold to BASF a method for the high-pressure catalytic synthesis of ammonia, the base for artificial nitrogen fertilizer (“Bread from air”). From 1911, he continued research on ammonia and other scientific problems as a director of the Kaiser Wilhelm Institute for Physical Chemistry and Electrochemistry in Berlin, which he headed successfully until 1933.

Haber during the First World War↑

In autumn 1914, as a reaction to position warfare and Salpeter import problems (the base material for explosives), the German military started looking for substitutes and new weapon technologies. Haber’s synthetic ammonia from the air became the key source of nitric acid instead of Salpeter. Erich von Falkenhayn (1861-1922) approached Haber and proposed blowing chlorine gas from canisters instead of artillery shells. This technique was used first during the Battle of Ypres in 1915, but a lack of German reserves prevented a breakthrough, and poor wind conditions limited its use. A gas arms race began, with both sides disregarding the Hague convention. Haber integrated his institute completely into the military system and made it a centre of gas research for the army. Scientists worked on identifying new gas substances as well as developing offensive and defensive technologies. In 1915, Haber’s institute developed a gas mask with a three-layer filter based on activated carbon and hexamethylentetramine, which was effective against all gas types in use.

From 1916, diphosgene gas shells replaced blown gas, and from 1917, arsenicals were also combined, which were supposed to force soldiers to take off their gas masks. Mustard gas was also introduced, to which Haber remained sceptical because Germany had no effective defence against it. At the end of the war, almost 30 percent of German shells contained gas. Nonetheless the overall strategic value of gas was low.

After the war, expecting to be on the list of war criminals, Haber left Germany temporarily to avoid prosecution. In the same year he was awarded the Nobel Prize. Later he led the effort to re-integrate German chemists into the international scientific community. In 1933, Haber resigned his directorship and left Germany to protest National Socialist forced dismissals of “non-Aryan” staff, even though his war service temporarily exempted him, despite his Jewish ancestry. 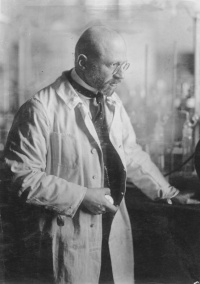 Fritz Haber in the lab