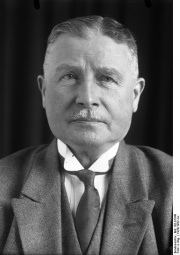 Groener, Wilhelm Karl Eduard
Head of the Railway Section at the General Staff, board member of the War Food Office (''Kriegsernährungsamt''), head of the War Office (''Kriegsamt''), chief of staff of Army Group Eichhorn-Kiew, first quartermaster general, politician after 1919
Born 22 November 1867 in Ludwigsburg, Germany
Died 03 May 1939 in Bornstedt, Germany

As head of the Railway Section at the General Staff, Groener was responsible for the timely transport of troops to the front in August 1914. He was sacked from the Supreme Army Command (Oberste Heeresleitung, OHL) in August 1917 and deployed to the front in Ukraine. In October 1918, he was chosen to replace Erich Ludendorff as first quartermaster general. At the start of the revolution he concluded an agreement with Friedrich Ebert in order to stabilize the domestic situation in Germany.

On his seventeenth birthday, Wilhelm Groener (1867-1939) joined the (Württemberg) Infantry Regiment No. 121 in 1884 and was appointed to the General Staff in 1899. Until 1916 he mainly served in the Railway Section. Although the Railway Section did not enjoy high prestige within the traditional German military, Groener’s work not only required traditional military skills, but also expertise in questions of logistics, transport and the wider economy.

At the outbreak of the Great War, Groener’s competence was put to the test. Mobilised troops had to be sent by rail to the western borders of the Reich according to the strict time schedule of the German war plans. After the lost Battle of the Marne, Groener succeeded in adapting the civil railway system to meet military demands in the ensuing war of attrition. From May 1916 he additionally became a board member of the newly created War Food Office (Kriegsernährungsamt). Promoted to lieutenant general (Generalleutnant) he was charged with running the War Office (Kriegsamt) on 1 November 1916. This new organisation had to synchronise the German war economy, which was suffering immensely from the impact of the British naval blockade. In order to sustain a total war, Groener embraced the so-called Hindenburg Program with the mobilisation of German society and economy. In contrast to the majority of the military elite, however, Groener saw the old political system as obsolete and hence urged for liberal and democratic reforms in Germany in order to maintain the industrial workers’ loyalty. This became particularly apparent in his reaction to the April 1917 strikes, when he argued for drawing a sharp line between social democrats and independent socialists; he wished to integrate the former into a new government and also to control the tycoons’ war profits. These ideas made him suspicious to influential members of the military and political establishment and led the Kaiser to remove Groener from his post in August 1917.

Subsequently, Groener was appointed to frontline duties as a divisional and then a corps commander. When the Central Powers occupied Ukraine in spring 1918, Groener became the chief of staff of the Army Group Eichhorn-Kiew. He was the key figure in shaping the German occupation strategy and often interfered in domestic Ukrainian politics, but his policy of economic utilisation eventually failed. Groener was an outspoken critic of the Brest Peace Treaty and considered Bolshevik Russia an uncontrollable danger for Germany. In fighting local Ukrainian Bolsheviks, Groener relied on a policy of cooperation with the Ukrainian administration. He did not encourage or endorse brutal warfare, but at the same time did not sanction commanders who had committed atrocities.

In the wake of the imminent military defeat and civil unrest at home, Groener replaced Erich Ludendorff (1865-1937) as first quartermaster general on 26 October 1918. His appointment had a moderating effect as he quickly reached an agreement with the new social-democratic government under Friedrich Ebert (1871-1925). This cooperation ensured the army’s loyalty to the young republic, at least as long as Groener controlled army politics. Consequently, the German field army could withdraw from the occupied areas in good order and, at the same time, German radicals’ attempts to emulate the Bolshevist seizure of power were suppressed, albeit locally at the price of high civilian casualties and increased division between the government and parts of the working class. Groener judged the terms of the Versailles Treaty unbearable, but still supported its signing, arguing that the German army could not return to war in the spring and summer of 1919. Groener finally retired from the army in September 1919.

After the war Groener became an influential military writer and his works contributed much to the creation of the Schlieffen Plan myth. More importantly, however, he started his second career as a politician in the democratic Weimar Republic. Not a member of any party, Groener served first as minister of transport from 1920 to 1923, then as minister of defence from 1928 to 1932 and additionally as acting minister of interior in 1931/32. Initially he hoped to integrate the rising Nazi party into the Weimar state, but later undertook measures to oppose them, including the enforcement of a ban on the Sturmabteilung (SA) and Schutzstaffel (SS) on 13 April 1932. Following numerous internal power struggles, Groener lost all his ministerial posts in the final months of the dying Weimar Republic.

Stemming from the lower middle class, Groener’s career showed that capable officers could rise to the highest ranks in the German army before 1918/19. Gifted with diplomatic talents, he epitomised the political soldier with an independent and pragmatic mind. This distinguished him from many of his military colleagues and enabled him to cooperate successfully with civilian powers and to succeed in the political world.

Members of the Great Headquarters, November 1918