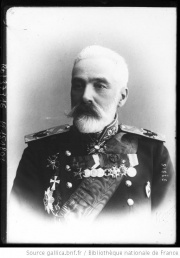 Grigorovich was Navy Minister between 1911 and 1917. He sought cooperation with parliament and secured funds to rebuild fleets ravaged by war with Japan. His support for mobilisation in 1914 helped push Russia into a conflict for which the navy was unprepared and which the tsarist government would not survive.

The life of Ivan Konstantinovich Grigorovich (1853-1930) is entwined with the history of the Russian navy in the early 20th century. After graduating naval college, he served in the Russo-Turkish War of 1877-1878, and worked as an officer on various ships and as naval attaché to Great Britain. He was then appointed to command the battleship Tsesarevich, and in 1903 was sent to Port Arthur in Chinese Manchuria. In February 1904 war broke out between Russia and Japan with a surprise attack by the Japanese on the Russian naval squadron at Port Arthur. The Tsesarevich was holed during the attack but, following repairs, led Russia’s thwarted attempt to break through the Japanese blockade of the port in June. It was Russia’s flagship in the Battle of the Yellow Sea in August, when the Port Arthur squadron tried to escape to Vladivostok. Struck by a salvo of Japanese shells, the helm of the Tsesarevich jammed and the fleet commander was killed, but Grigorovich kept the ship afloat and continued firing. As most of the squadron headed back to Port Arthur, Grigorovich reached a German treaty port, where the Tsesarevich was interned. He was decorated for his bravery and appointed commanding officer of the Port Arthur harbour, responsible for ensuring supplies reached the remaining squadron amidst the severe shortages from the prolonged Japanese siege. Following Russia’s surrender of the Port Arthur fort and Japan’s rout of another Russian navy squadron in the Battle of Tsushima, with military losses and economic exhaustion mounting on both sides and domestic discontent erupting in Russia, a peace settlement was signed and Grigorovich returned home. He served as the Black Sea Fleet’s Chief of Staff, commanded the bases of Libau (Liepaja) and Kronstadt and, in 1909, became assistant to the Navy Minister. In 1911 he was promoted to the rank of admiral and to the position of Minister of the Navy, in charge of reconstituting the fleets ravaged by war and reforming a ministry beset by the fractured politics of the Russian autocracy.

Russian naval losses in the Russo-Japanese war amounted to about 250 million rubles worth of hardware. Only the Black Sea Fleet remained intact. The annihilated Baltic and Pacific Fleets had just two battleships and two armoured cruisers left in service. In addition to the material destruction, the morale of sailors was low and distrust between officers and men ran deep. Sailors enlisted from Russia’s urban working class were active in the revolutionary unrest of 1905, famously mutinying on the Black Sea Fleet’s battleship Potemkin, and the rebellious mood persisted in ensuing years. The reconstruction and modernisation of the navy had the support of Nicholas II, Emperor of Russia (1868-1918), whose navalist leanings were encouraged by the prestige of a large navy and his inclination to look to Russia’s Pacific coast or to Constantinople and the Straits for opportunities for expansion and threats to security.

The progress of naval reform was initially hampered, however, by financial impoverishment, competition for resources, conflicting security strategies and uncoordinated administration. War with Japan had cost billions of rubles to finance and burdened the treasury with huge debts to foreign financiers. The navy faced competing claims on a limited state budget from an army that had been denuded of men and armaments and from organs responsible for re-establishing domestic peace and prosperity. The issue of whether to prioritise maritime security and fund a massive shipbuilding programme, or to concentrate on the threat from the central European powers and give precedence to modernising the army’s western defences became a political football bounced between the Tsar, the ministries, the General Staff and short-lived institutions such as the State Defence Council under Nikolai Nikolaevich, Grand Duke of Russia (1856-1929). Allocation of defence spending also became a battleground for new political institutions created in response to the protests of 1905 to assert their prerogatives. The parliament, or Duma, refused credits for the construction of battleships in the Baltic in early 1908, only to be chastised by the Chairman of the Council of Ministers and overridden by the conservative State Council. From 1908 to 1909 the Duma, with the support of ministers, locked horns with the State Council over parliament’s right to approve naval staff lists along with credits, a matter only resolved when the Tsar intervened on the side of the Council.

Against this background, Grigorovich has been hailed by commentators, including Sir Bernard Pares (1867-1949), British observer with the Russian army during the war, and historian Dominic Lieven, for his efforts as Naval Minister to achieve a working relationship with parliament and to secure credits for fleet expansion and naval reform. In 1910, as Russian finances recuperated and foreign policy evolved in the direction of closer cooperation with France and readiness to combat Germany in the event of continental war, the government launched a “Small Programme” of rearmament, expanding it at the end of 1913 to a “Great Programme” of defence expenditure. The main priorities were raising army recruits, reorganising mobilisation structures and investing in artillery and aviation. Under Grigorovich’s stewardship, however, the navy did not lose out. By 1914, the squadron of Baltic battleships was nearing completion, new units were under construction in the Black Sea, ambitious programmes for future shipbuilding had passed into law, and Grigorovich was overseeing reorganisation in spheres from training to tactics.

Grigorovich’s reforms, notably his concentration of forces in the Baltic and emphasis on defence and proficient mine laying, served Russia well during the First World War. In the Baltic, German sallies were kept at bay by Russian mines and sunken ships. Effective mining also helped maintain Russian supremacy in the Black Sea until the revolutions of 1917, although the fleet was not strong enough to force Russian control of the Straits. Wartime running of the navy passed to the army high command, but Grigorovich offered support and persevered with attempts to smooth relations between ministers, the Tsar and the public. In 1915, when the Tsar’s decision to dismiss Grand Duke Nikolai Nikolaevich as Commander-in-Chief and assume Supreme Command of the army himself caused disquiet in the cabinet and public bodies alike, Grigorovich supported a ministerial letter to the Tsar begging him to reconsider, although he did not sign the letter himself and survived subsequent culls of the government by the Tsar.

Grigorovich’s leadership of the Naval Ministry, however, is not immune to criticism. Given the minimal, defensive strategy adopted by the navy in the war, funds Grigorovich claimed for shipbuilding might have been better spent shoring up fortifications in the southwest of the empire. Grigorovich, moreover, bears some responsibility for Russia’s decision to adopt an aggressive stance towards the Central Powers in July 1914 when the army and navy were not in full readiness for war. Russia had made steps towards creating a first-class navy by 1914, but it was a navy under construction and manned by a resentful body of sailors subject to prolonged involuntary service, poor pay and harsh, arbitrary discipline by officers. When Russia’s Council of Ministers met to discuss Austria’s ultimatum to Serbia, Grigorovich, along with his counterpart in Russia’s War Ministry, asserted that although the rearmament programme was not completed, hesitation in foreign affairs was no longer appropriate. With these assurances, the Tsar mobilised Russia for war. The social and economic dislocations precipitated by the war effort, and the inability of the political establishment to manage them, contributed to the overthrow of the Tsar and his government in February 1917 and the downfall in October of the successor Provisional Government at the hands of the Bolsheviks. During both revolutions, despite efforts by Grigorovich to quell unrest, enlisted sailors were among the most violent and radical actors. Having failed to avert revolution in the navy, Grigorovich left politics behind for academic employment. The disarray in the army and navy and the decimation of the officer class, murdered by the mutinous lower ranks or evaporated into the White forces opposed to the Bolshevik regime, along with a certain cultural conservatism on the part of Bolshevik leader Vladimir Lenin (1870-1924), meant that the new government sought the expertise of cooperative military specialists from the old order. The flexible Grigorovich found work on a historical commission set up to study the naval lessons of the war. He also worked on his memoirs, although these remained unpublished until after the fall of the Soviet Union.[1] Suffering from poverty and ill health, he secured permission to emigrate to France in 1923, where he died seven years later.