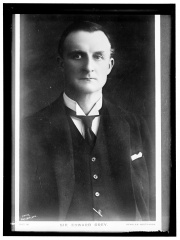 Grey was the longest-serving British foreign secretary of the 20th century. His time in office is controversial for his role in the outbreak of the First World War.

After the early death of his father, Edward Grey (1862-1933) was raised under the influence of his grandfather on the family estate at Fallodon (Northumberland). Here, he developed a passion for country life, which he later shared with his wife Lady Dorothy Grey (1865-1906), and became an expert on fly-fishing and bird-breeding.

Grey was educated at Winchester and Balliol, leaving university with an undistinguished law degree in 1884. He was elected to parliament in 1885, where he entered the ranks of the Liberal Imperialists and associated with Archibald Philip Primrose, 5th Earl of Rosebery (1847-1929), Herbert Henry Asquith (1852-1928) and Richard Burdon Haldane (1856-1928). A parliamentary under-secretary for foreign affairs from 1892, he caused a stir with the “Grey declaration”, demarcating British and French spheres of influence on the River Nile (March 1895).

In opposition from 1895, he supported the Boer War, but he also advocated Irish Home Rule, social reform, and organized labour. With the return of the Liberals to power, Grey was appointed foreign secretary on 7 December 1905. Two months later, he suffered the loss of his wife in an accident.

Grey’s period in office was marked by the management of international crises and of rivalries in great power relations, such as the naval race with Germany. Against the German naval build-up, Grey maintained the aim of British maritime superiority; in cabinet, he defended increased estimates for the navy, in the face of deep misgivings on the part of some of his Liberal colleagues. In diplomacy, he consolidated his predecessor’s entente with France and in 1907 secured an agreement with Russia, settling colonial disputes in Africa and Asia respectively. Although Grey achieved some success in maintaining the Concert of Europe during the international crises of the pre-war years, his refusal to compromise the entente with France and Russia called forth accusations of “encirclement” from Germany. Attempts to forge better relations with the sometimes erratic German government came to nothing. Together with a neglect of Austria-Hungary, Grey’s alignments had the unintended effect of alienating the Central Powers, thus undermining the foreign secretary’s efforts to preserve peace between the major European powers.

The dilemmas of Grey’s policies became obvious during the July Crisis. Despite earlier indications to the German government that Britain was likely to aid France in the case of war, Grey hesitated to promise the French unconditional British support. Some critics argue that this might have encouraged the Germans to underestimate the seriousness of the Anglo-French entente. Recent research, however, suggests that war preparations on the continent went along with little recourse to Britain, thus leaving Grey powerless to influence events. When his calls for an international conference to settle the crisis went unheeded, Grey accepted the fact that his search for peace had failed. In a speech to parliament on 3 August 1914, he used the violation of Belgian neutrality by the Germans to rally the cabinet and the public behind the defense of France. His famous observation on the same night encapsulated Grey’s sense of failure: “The lamps are going out all over Europe. We shall not see them lit again in our lifetime.”

Grey’s role in government diminished after the outbreak of the war. He failed in his attempts to prevent the Ottoman Empire and Bulgaria from joining the Central Powers, but laid the foundations for a close Anglo-American relationship. With the fall of the government in 1916, he left office and moved to the House of Lords as Viscount Grey of Fallodon.

After the war, Grey supported the establishment of the League of Nations and, among other positions, acted as Leader of the House of Lords. He married a second time and, despite rapidly deteriorating eyesight, published an autobiography (Twenty-Five Years, 1925) and several books on fishing and ornithology.