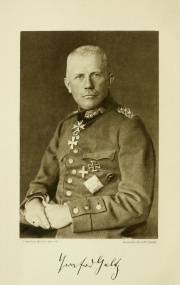 Count Rüdiger von der Goltz was a German army general during the First World War who commanded divisions on the western and the eastern fronts. In 1918, he was also the commander of the German “Baltic Sea Division” during the civil war in Finland. After the Compiègne armistice, von der Goltz led the VI Reserve Corps in the Baltic lands and was a leading coordinator of right-wing veterans’ organizations in the Weimar Republic.

Military Positions before and during the First World War↑

Rüdiger Graf von der Goltz (1865-1946) was born into one of the oldest Prussian noble families. He entered the War College in Berlin in 1881 and was assigned to the Great General Staff in 1895. In 1911, he was appointed section chief in the Great General Staff and director of staff at the War College. At the beginning of the First World War he led the 76th Infantry Regiment at the first Battle of the Marne in September 1914, and the 5th Guards Brigade in the Battle of the Masurian Lakes in February 1915, amongst other things. In February/March 1918, von der Goltz assumed the command of the “Baltic Sea Division”. It consisted of 11,000 troops who were mostly drawn from reserve divisions and light infantry battalions. Together with Carl Gustaf Emil Mannerheim (1867-1951), who served as commander in chief of the nascent Finnish army after the Finnish parliament’s Declaration of Independence in December 1917, von der Goltz led the “Baltic Sea Division” against the revolutionary “Red Guards” in the Finnish civil war. The civil war foreshadowed the brutality of the conflicts that followed the First World War. It saw both sides commit atrocities, including multiple executions of prisoners. After the Finnish civil war came to an end in mid-May 1918, secret negotiations between the Finnish and German governments led to closer economic and diplomatic relations between the two countries. Von der Goltz coordinated military cooperation with Germany as the “German General in Finland” until December 1918.

Following the November armistices, at the behest of the Allies, German forces remained in the Baltic provinces to protect the independent states of Latvia and Lithuania against the Red Army. At the beginning of 1919, von der Goltz commanded the VI Reserve Corps, which included troops of the Baltic Landeswehr, recruited mostly from Baltic Germans, regular German troops and free corps units. In spring 1919, he launched a counter offensive against the revolutionary Bolshevik army in Latvia. In a military campaign without fixed boundaries, soldiers under von der Goltz’s command pushed the Red forces out of Courland, and Riga was reclaimed in May 1919. In April/May 1919, von der Goltz supported a coup which removed the government of Kārlis Ulmanis (1877-1942), who wanted to obtain greater Latvian sovereignty and independence. The plotters worked against Ulmanis in favour of securing closer collaboration with Germany instead, but remained without support from the local population. On several occasions, von der Goltz ignored the orders of the German government in Berlin and pursued his own policy as a “warlord” instead. Following lame Allied protests, von der Goltz’s German forces were able to remain in the region until the summer of 1919 when the Allies, who were afraid of German influence in the Baltic states, finally decided to force the German government to bring them back to Germany. The Allies accused von der Goltz, among other things, of allowing soldiers under his command to commit atrocities against Latvian civilians. Goltz’s defeat in the Battle of Wenden made it possible for the Entente’s claims to materialize.

Political Activism in the Weimar Republic and the Third Reich↑

Von der Goltz became one of the leading opponents of the Weimar Republic on the nationalist right. During the Kapp Putsch in March 1920, he served as commander in Berlin and was considered by Wolfgang Kapp (1858-1922) for a future military leadership position in the Troop Office (Truppenamt). Between 1924 and 1930, von der Goltz chaired the paramilitary Young German League (Jungdeutschlandbund). He served as chairman of the United Patriotic Associations of Germany (Vereinigte Vaterländische Verbände Deutschlands, or VVVD) from 1924 until its dissolution in 1933/34. The VVVD served as a loose confederation of various right-wing paramilitary organizations. He represented the VVVD at the Harzburg rally in October 1931. The rally united a range of right-wing organisations against the Weimar Republic. They included the German National People’s Party (Deutschnationale Volkspartei), the National Socialist German Workers’ Party, the Steel Helmets (Stahlhelm), and the Pan-German League (Alldeutscher Verband). After the dissolution of the VVVD, von der Goltz became chairman of the Reich Association of German Officers (Reichsverband Deutscher Offiziere) in 1934, one of the Third Reich veterans’ organizations that became increasingly coordinated (gleichgeschaltet) by the Nazi regime’s foundation of the Reich Soldiers’ League (Reichskriegerbund) in 1938. Although von der Goltz was promoted to the brevet rank of lieutenant general in 1939, he was increasingly sidelined by the Nazi regime. 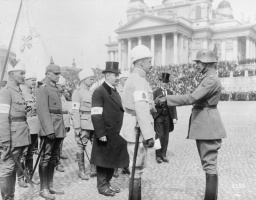