Although sometimes characterized as a quixotically hatched scheme to overthrow British rule in India, the Ghadar “conspiracy” is best understood as a failed bid to foment a democratic revolution in India in the midst of the First World War. The “conspiracy” was intended to spur the dissolution of the British Empire, and to establish a republic - the United States of India.

Ghadar means revolt, rebellion, or revolution in Punjabi and Urdu. The name Ghadar can refer to the informal moniker of the Hindustani Association of the Pacific Coast, a party of radicalized Indian workers formed in the United States in 1913 or to the title of the party’s newspaper. The name also came to refer to the foiled insurrection attempted by native soldiers in India in 1915 that was unmasked after the war as an international “conspiracy” masterminded by the members of the Ghadar Party and the Berlin Indian Independence Committee (IIC).[1]

Before World War I, some 10,000 unskilled, primarily Sikh, workers had migrated to the Pacific Coast of the US and Canada. Most of these men (their wives and children were generally barred entry) had been agriculturalists in India, though a significant number were ex-servicemen, whose last postings had been at British cantonments in the Far East. It was in these cantonments where they first learned of the opportunities in the New World. Their transpacific passage to North America was facilitated by companies such as the Canadian Pacific Railway. The men found work on the railroads, in lumber mills, in fish canneries, and in agricultural fields farther south, and were often hired off the docks through an established system of labor contractors. Indian labor was readily absorbed, as was that of the Chinese, Greek, Irish, and Japanese, until this sense of idyll was interrupted by a forceful backlash after 1907, when a deepening financial crisis fanned anti-Indian sentiments, as white workers and some established unions attempted to stem the “Tide of Turbans.” A wave of anti-Indian riots took place up and down the Pacific Coast after 1907, and the men also faced a host of new immigration restrictions that led them to question the worth of what it meant to be imperial subjects. Such experiences shaped these men politically, and led them to band together to form a party that was outside the mainstream of Indian nationalism, and had antipathy for many of its contemporaries, even those motivated by ostensibly anti-imperialist aims.

Filled with the ominous sense that an inter-imperialist war was inevitable, the Ghadar newspaper made use of its August 1914 number to issue a call to its readers, as far afield as China and East Africa, to return to India in the service of an impending revolution. Given their background, the revolutionaries intended to take advantage of the war and their own close relationships, as well as the circulation of their newspaper amongst native soldiers to spark a revolt in India that would then lead into a wider uprising. Although precisely how a military-led revolution fomented by a group of radicalized expatriates was to issue into a socialist republic was, to be sure, left underspecified. Far from sparking a revolution, this open declaration led to a wave of preemptory arrests from New York to Calcutta. After regrouping, in the late autumn of 1915, the party tried to coordinate an uprising of native soldiers, but this scheme was foiled before the first shot was ever fired - as were the more desperate bids for an insurrection that followed. If imperial Germany was to offer its assistance to the rebels, so much the better, but as it happened, the party was frustrated in this expectation over the course of the war.[2] Although arms were bought through shell companies financed by the network of German consulates in the US, and were to be supplied to the Indians through intermediaries in the Far East, none of these weapons ever reached India. Most of the estimated 3,000 or so Ghadar revolutionaries who had returned to India during the course of the war were forced by authorities to return to their villages. About 100 conspirators were sentenced in tribunals held in Lahore, whereas the main party officers were indicted, together with diplomats of the Kaiserreich, in the sensational Hindu-German conspiracy case tried in San Francisco in 1917–1918.[3]

After the war, with their aspirations of a violent revolution sobered, the party ramified. The editor of Ghadar, Har Dayal (1884-1939), retreated into a defense of the British Empire, while other party members subordinated themselves politically to mainstream nationalism, and some scattered in the direction of religious organizations. However, even as their erstwhile comrades sought to disclaim or distance themselves from the party, one group continued to stake a claim to its mantle and oriented itself toward the Marxist left. 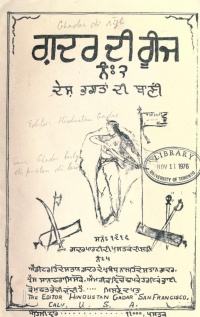