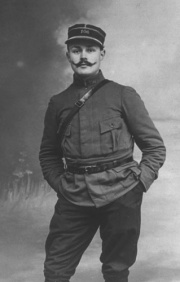 The war turned Maurice Genevoix into a writer. He embodied soldier loyalty and was the author of Ceux de 14, a prime example of French literary narrative and a monument compelling us not to forget.

Maurice Genevoix (1890-1980) was a brilliant student at the Ecole Normale Supérieure who was mobilized in the infantry in August 1914. The young second lieutenant took part in the battle of the Marne with the 106th Infantry Regiment and was then posted to Les Eparges (Meuse) starting in mid-October 1914. Despite the extremely harsh conditions and carnage provoked by repeated attacks, he wrote unrelentingly in his notebooks. On 25 April 1915, he was wounded by three bullets in the shoulder and chest. Disabled and discharged, he wrote Neath Verdun, published in May 1916, which he dedicated to his deceased friend, Lieutenant Robert Porchon (1894-1915). The book was immediately acclaimed, both for the veracity of its account and for the clarity of the language used.

Between 1916 and 1923, Maurice Genevoix published four other books based on his war experience. And yet he was also compelled to draw on another source of inspiration, rooted in nature and the miracle of life (Raboliot, Prix Goncourt 1925). His loyalty to the dead and to his comrades was pursued via his involvement in veterans’ organizations. In 1929, Jean Norton Cru (1879-1949) called him “the greatest painter of the war”. In 1949, the author compiled his five war books under the title Ceux de 14 in order to create a literary monument. Genevoix was elected to the Académie française in 1946; he also initiated the Verdun Memorial, which he inaugurated in 1967, and was highly respected by General Charles de Gaulle (1890-1970). Maurice Genevoix never ceased to counterbalance mourning and forgetting with the values of remembrance, fraternity and peace.