In 1915, Germany set up the “Generalgouvernement Warschau”, or General Governorate Warsaw, as the administrative unit for its occupied territories in Russian Poland. Under the leadership of Governor General Hans von Beseler and Wolfgang von Kries, head of the civil administration, the country was exploited. However, in November 1916 an independent kingdom was proclaimed.

After the conquest of some western territories of Russian Poland in fall 1914 the Germans established control of the industrial city of Lodz and the religious centre of Częstochowa. On 5 January 1915 a civil administration for the German occupied territories was formally erected. It was first run by Felix von Merveldt (1862-1926), followed by Hans von Bandenstein (1870-1950). Oberst Hans von der Esch (1862-1934) was the military delegate from Ober Ost; he later became chief of staff of the Generalgouvernement Warsaw.

With further victories in summer 1915, the Polish capital Warsaw was conquered. On 24 August 1915, it became the new administrative headquarters and seat of the Generalgouvernement Warsaw. A smaller part of Poland around the cities of Augustów and Białystok remained under the rule of the military command Ober Ost. The south-eastern part of Congress Poland, directly attached to and encompassing areas east of the Vistula was administered by Austria-Hungary. There, on 25 August 1915, the Militärgeneralgouvernement Kielce was established, renamed on 1 October 1915 to the Militärgeneralgouvernement Lublin, after the largest and most important city in the occupation zone. With 48,000 square kilometres and a population of about 3.5 million, it was much smaller than the German area of ​​62,000 square kilometres and a population of 6 million. The latter was grouped into eleven governments and thirty-two Kreiskommandos (county commands) that organised social security, traffic, health, and especially the economy, aiming at an exploitation for German benefit. In that respect, Poles had to work in Germany and foodstuff was exported, which led to severe hunger especially in Warsaw and Lodz.

In Warsaw, Governor-General Generaloberst Hans von Beseler (1850-1921) was directly appointed by and subordinate only to the German Kaiser. Beseler set the political agenda, but the actual implementation and execution of politics was the responsibility of a civil administration now lead by Wolfgang von Kries (1868-1945), subordinate to the Berlin Reich authorities and otherwise independent. Beseler officiated until the war ended, Kries until mid-1918. Together they developed a high degree of political continuity and acted relatively unaffected by the frequently changing desires of the military in the Oberste Heeresleitung (OHL), or Supreme Army Command. Local administration played a minor role only after 5 November 1916, when the governors-general in Warsaw and Lublin proclaimed the Kingdom of Poland. As neither Germany nor Austria-Hungary were willing to share their power, the Polish state and later privy council remained without much influence.

German rule in Poland ended on 11 November 1918 with the proclamation of an independent Polish state. 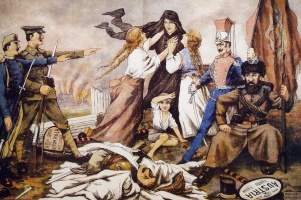 Allegory of the Resurrection of Poland, Bogdan Nowakowski, 1915 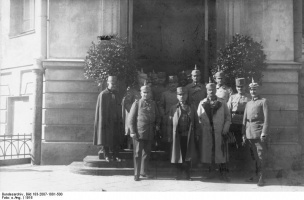 Austro-Hungarian and German Governor-Generals in Lublin 1916 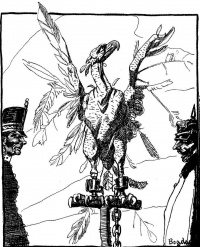 Caricature of the occupation of Poland 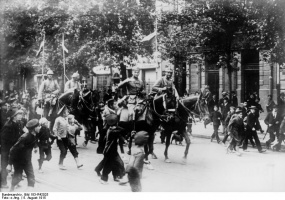