Stavka Verkhovnogo Glavnokomanduyushchego was the centre of the field command of the Russian army, the headquarters of the supreme commander and his staff in 1914-1917.

Stavka Verkhovnogo Glavnokomanduiushchego translates literally as “Seat of the Supreme Commander”.[1] Used as the de facto name for the headquarters of the supreme commander, “Stavka” developed as shorthand in all communications emanating from the commander and his staff.

To manage the conduct of the war and the territories behind the front line, the supreme commander required an extensive staff. In 1914, the administration was organised under the chief of staff; the department of the quartermaster general; the department of the general on duty; the department of military transportations; the naval department; and the diplomatic chancery (liaising with the ministry of foreign affairs in Petrograd). As the war went on, the number of departments doubled.

Relation to Other Military Command Institutions↑

Note that in 1914 there was no separate institution in the Russian Empire called the “general staff”. The main staff, created in 1865, was in charge of only administrative paperwork, and functions that did not directly affect the performance of the Russian army, such as management of prisons and military education. The title “chief of the general staff” usually refers to the head of the main directorate of general staff.

The grand duke was a very popular figure with both the army and the Russian public, but his abilities as a strategist were limited. Most of the strategic planning in the Stavka in 1914-1915 was done by General Danilov, while the grand duke managed occupied territories and was actively involved in internal politics.

In 1914, the success of the Russian army in Galicia masked the limitations of the grand duke’s command until 1915, when the Stavka’s inability to deal with shell shortages allowed the German breakthrough at Gorlice-Tarnow. This led to the “Great Retreat” loss of Russian Poland. With the Germans advancing into Russian territory, the Stavka was moved to Mogilev on 21 August 1915.[2] On 5 September 1915, Grand Duke Nikolaevich was dismissed and Nicholas II, Emperor of Russia (1868-1918) himself assumed supreme command.

In Mogilev, the Stavka was located in the local administration building, while the tsar resided in the governor general’s house. The Stavka was significantly altered by the arrival of the monarch, whose presence brought more people to it and imposed a more formal protocol on Stavka officers.

The new supreme commander appointed General Mikhail Vassilievich Alekseyev (1857-1918) as chief of staff and General Mikhail Savvich Pustovoitenko (1865-1918)[3] as quartermaster general. The emperor delegated most of the military decision making to Alekseyev, so he became the de facto commander-in-chief of the Russian army. He oversaw the day-to-day running of the army, strategic planning, munitions, and communications with the Allies. Unused to sharing responsibility with his subordinates, Alekseyev conferred with only a handful of close advisers. These included Pustovoitenko and General Viacheslav Evstafievich Borisov (1861-1941), Alekseyev’s comrade from the Kazansky regiment, who had accompanied him on all of his postings since 1914.

Alekseyev was a talented military commander who initially desired to distance himself and his staff from political intrigues. But the internal political crisis in Russia was intensifying and began to affect military performance. In these circumstances the Stavka was unable to stay detached from politics. In March 1917, after it became apparent that the revolution had been successful in Petrograd, Alekseyev advised the emperor to abdicate, and himself supported the Provisional Government.

After the February Revolution, the Stavka retained its function as the centre of the field command. However, its activity was complicated by political instability in Petrograd and deteriorating discipline in the army. Alekseyev became the supreme commander in March 1917 and remained in the Stavka until May 1917, when he was replaced by Aleksei Alekseevich Brusilov (1853-1926).

After the failed offensive in July 1917, the Stavka was rapidly losing control of the army. The chairman of the Provisional Government, Aleksandr Fedorovich Kerenskii (1881-1970), assumed the title of supreme commander, but remained in Petrograd. His chief of staff, General Nikolai Nikolaevich Dukhоnin (1876-1917), remained in Mogilev and tried to prevent the disintegration of the armed forces. In November 1917, the Bolshevik Revolution marked the end of Russia’s participation in the Great War. Dukhonin was killed on 3 December 1917 by revolutionary troops. Bolshevik Nikolai Vasilievich Krylenko (1885-1938) was appointed supreme commander and began to negotiate an armistice with the German and Austro-Hungarian commands. On 26 February 1918, the Stavka was moved to Orel. It was officially disbanded on 16 March after the signing of the Treaty of Brest-Litovsk. 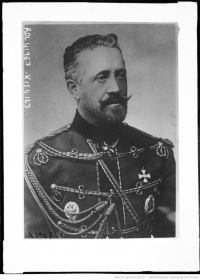 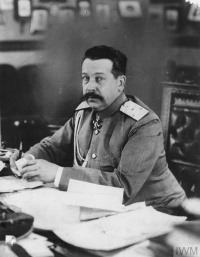