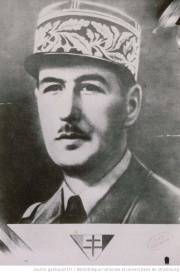 Charles de Gaulle’s service during World War I and his experiences as a prisoner of war shaped the future leader of France, strengthening his belief in offensive firepower and the need for France to maintain its great power status.

After a childhood noted for the serious nature of his military play and study, Charles de Gaulle (1890-1970) was accepted to the military academy at Saint-Cyr in 1909. Four years earlier, the French National Assembly had passed a law mandating prospective cadets spend a year as an enlisted soldier before entering Saint-Cyr. Accordingly, de Gaulle spent one year in the 33rd infantry regiment as a private. Following his graduation from Saint-Cyr in 1912, Lieutenant de Gaulle requested to return to the 33rd, which was then stationed in Arras. His commanding officer for the next two years was Colonel Henri Philippe Joseph Pétain (1856-1951). The two outspoken and self-confident men developed a mutual admiration centered on their shared belief in the strength of firepower over the spirit of the bayonet charge. They spoke regularly until Pétain was elevated to command of a brigade just prior to the outbreak of war.

Germany declared war on France on 3 August 1914, and by 5 August, the 33rd began marching towards Belgium as part of the 2nd division of the 5th army. Encountering the Germans at the Meuse River at Dinant on 15 August 1914, Lieutenant de Gaulle led his section in a charge straight into machine guns. Along with many of his men, he fell almost immediately, taking a bullet in the leg. The French were unable to prevent the Germans from crossing the Meuse, and while de Gaulle recovered in the hospital, the army fell back in complete retreat. Those first days of the war confirmed, for de Gaulle, his prewar belief in the dominance of firepower.

De Gaulle returned to the regiment in October 1914 and was appointed regimental adjutant shortly thereafter. Despite his staff position, he volunteered to lead several reconnaissance missions into no man’s land, earning him the Croix de Guerre in January 1915. He was promoted temporarily to captain the next month, a rank made permanent in September. On 10 March, at Mesnil-lès-Hurlus, Captain de Gaulle received his second wound when he was shot in the hand towards the end of the First Battle of Champagne. After four months of convalescence, he returned to take command of 10th company of the 33rd regiment, which had moved to a quiet sector on the Aisne River.

De Gaulle’s quiet period ended when the German 5th army attacked at Verdun on 21 February 1916. The 33rd was immediately sent to reinforce the fortified lines around the city, which had come under the command of General Pétain. Three days into the battle, the Germans captured the key French stronghold of Fort Douaumont. De Gaulle and the 33rd arrived the following day and prepared to move to the front. On the night of 1-2 March, the 33rd regiment occupied its new trenches under a horrifying bombardment of artillery. When the bombardment lifted, the Germans attacked out of Fort Douaumont and hit de Gaulle’s men from three sides. Hand grenades gave way to hand-to-hand combat as the Germans attacked through the French trench. With a few other men, de Gaulle quickly made his way through the trench in an attempt to locate the adjacent unit, but as he turned a corner, a German soldier thrust his bayonet into de Gaulle’s thigh. He was then captured and carried back to a German field hospital. Believing him dead, Pétain awarded de Gaulle the Legion d’Honneur.

For the next thirty-two months, de Gaulle was a prisoner of war. During his captivity, he attempted to escape on five occasions and was consequently moved several times and kept in solitary confinement for long periods. He made his first escape attempt from the hospital train on the way to Friedberg Prison. From Friedberg, de Gaulle was moved to Rosenberg, Osnabrück, Neisse, Szczuczyn, Magdeburg Castle, and finally to Ingolstadt. Fort IX at Ingolstadt was designated for incorrigible rule-breakers and those who tried to escape.

De Gaulle grew increasingly frustrated, and at times depressed, that his captivity kept him out of the war. Nevertheless, the forced isolation focused de Gaulle’s thoughts, allowing him to improve his German and work out his theories on warfare. De Gaulle followed the events of the war by reading German newspapers, which allowed him to see the war from a much different, and much broader, perspective than he would have managed as a captain in the trenches. Prison also shielded de Gaulle from the experiences that so demoralized the French army in 1916 and 1917. His physical isolation from combat was therefore crucial to his intellectual development and to his understanding of the war.

Imprisoned with de Gaulle was the French aviator, Roland Garros (1888-1918). In addition to helping dig an escape tunnel, Garros taught de Gaulle a great deal about the utility of aircraft for observation and attack in warfare. While at Ingolstadt, he met a kindred spirit in the Russian prisoner and future Field Marshal Mikhail Nikolaevich Tukhachevsky (1893-1937), with whom he spent long hours discussing the future of mechanized warfare. De Gaulle continued to read and study, and he gave frequent lectures on history and tactics to his fellow prisoners. He was critical of French leadership, both military and civilian, for misunderstanding the nature of the war. His combat experiences had solidified his belief in firepower, but his studies in prison made him increasingly confident that there was still an offensive solution. When he read about the use of tanks at Cambrai, he was certain that the new technology would form the basis for that solution. While in captivity, de Gaulle drafted his first book, La discorde chez l’ennemi (The Enemy’s House Divided), arguing that Germany had failed at Verdun not because the inherent strength of the French defense, but because the Germans lacked the strength and will to push the attack.

De Gaulle returned to France disappointed that he had missed the last half of the war. He found an opportunity for redemption in defense of the newly-independent Polish Republic during the Polish-Soviet War from 1919 to 1921. Joining the French military mission to Poland, de Gaulle commanded armored forces for the first time, and he distinguished himself in battle fighting against Tukhachevsky’s Red Army. De Gaulle spent much of the next two decades lecturing and writing while continuing to serve in a variety of positions: occupation duty in the Rhineland, Pétain’s staff in Paris, a tour in Lebanon, and on the French War Council, before taking command of a tank regiment in 1937. In his writing and his lectures, de Gaulle argued that tactics should be based on circumstance rather than inflexible doctrine, and he believed that the mobility and firepower inherent in tanks and aircraft enabled a return of the offensive. His ideas and his self-assurance brought him into many clashes with French doctrine and leadership. His once-strong relationship with Pétain was among the casualties. Although they shared a belief in firepower, de Gaulle favored the offense, while Pétain’s war had taught him, and most other Frenchmen, that modern weapons made offensive warfare too costly. The rapid collapse of France in the Second World War proved de Gaulle correct. 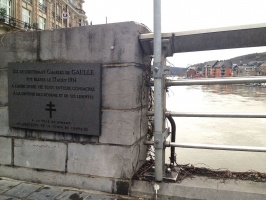