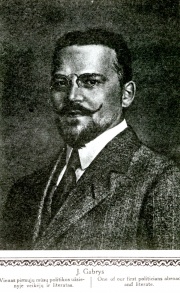 Juozas Gabrys was one of the major advocates of Lithuanian political aspirations in the international arena from 1911 to 1918. He contributed to the establishment of the Council of Lithuania in 1917. However, by acting mainly abroad, he gradually lost influence in Lithuania and later was marginalised in the political scene of the independent republic.

Juozas Gabrys (1880-1951) was already active in the Lithuanian political movement during his studies at the Marijampolė gymnasium. Russian authorities exiled him to Odessa for distributing illegal Lithuanian press. There he studied law at Odessa University and continued his national-cultural activity by becoming a member of the Lithuanian Democratic Party and the Teachers Union, as well as by founding the Lithuanian Peasant Union. During the Revolution of 1905, he propagated the idea of a national curriculum school and was elected to the secretariat of the presidium of the national congress of Lithuanians (Great Seimas of Vilnius). However, Gabrys had more ambitious projects in mind.

In 1907, he moved to Paris, where he continued his studies at the University of Sorbonne and his national activism, for example by publishing books on historical themes. Four years later he formed the Lithuanian Information Bureau (LIB) to promote Lithuanian aspirations. In this period, Gabrys’ political convictions evolved in the direction of the Christian Democrats. He criticized Russian and German authorities for the restrictions imposed on national Lithuanian life and supported the idea of an autonomous Lithuania within the Russian Empire. However, he opposed the idea of re-establishing the Polish-Lithuanian Commonwealth, which existed until 1795, as he feared it could directly lead to the Polonisation of Lithuanians.

Along with French journalist Jean Pélissier (1883-1939), Gabrys founded the Office Central des Nationalités and published the Annales des Nationalités to give the oppressed nationalities of Europe a common platform to express their aims and principles. Gabrys’ activities as an unofficial leader of the Lithuanian emigrants attracted the attention of European diplomats and secret service agents. Russian officials were not pleased with Gabrys’ activities. However, they were satisfied that he did not question the territorial integrity of the Romanov Empire. Additionally, he opposed Polish influence on Lithuanian terrain.

Political Activity during the War↑

The outbreak of the war made Gabrys’ activities more difficult and delicate. In September 1914, he participated in the American Lithuanians Congress in Chicago, a meeting of the Lithuanian clerical political movement. The congress supported autonomy for Lithuania (including the Lithuanian territories in Prussia) and authorized Gabrys to negotiate the future of Lithuania in the international arena. After the congress, Gabrys met with the German ambassador to the USA. On his return to Europe, British intelligence arrested him, and accused him of being a German spy. Although he was soon released, his freedom of movement in the Entente states was restricted.

In 1915, Gabrys decided to move the LIB to neutral Switzerland. There he established contacts with the German envoy and got involved in the activities of Los von Russland (a group in favour of dismembering Russia by national principle). He spread the rumour that the son of Wilhelm II, German Emperor (1859-1941), Eitel Friedrich, Prince of Prussia (1883-1942) would become the king of Lithuania. From 1916 onwards, Gabrys published a German-language magazine entitled Litauen.

Gabrys sought to unite all Lithuanian organizations in the USA, Russia and Switzerland. But he did not try to visit Lithuania, occupied by German troops since the summer of 1915, presumably because he did not want to make his relationships with the Entente states even more complicated.

During the war he co-organized several Lithuanian conferences. At a conference held in Bern in March and April of 1916, he promoted the idea of Lithuanian separation from both Poland and Russia. Russia’s anxiety about Gabrys’ allegedly pro-German stance led it to attempt to reduce Gabrys’ influence in the LIB. Meanwhile Gabrys co-founded the League of Alien Nationalities of Russia. The organisation published an appeal to American President Woodrow Wilson (1856-1924), demanding international protection of the nations. In June 1916, the Third Conference of Nationalities was summoned and it was used for the league's propaganda. Representatives from Lithuania obtained permission from the German occupation authorities to participate in this conference. The international resonance resulting from this meeting was strong. After some hesitation, (around the end of 1916 and beginning of 1917) the Ober-Ost was forced to grant Lithuanians the right of self-determination and to allow the Council of Lithuania (Lietuvos Taryba), the first organ of the future state, to meet in September 1917 in Vilnius.

After the second Conference of Lithuanians in Lausanne (30 June - 4 July 1916), the centre of Lithuanian policy actually began to move to Lithuania; Gabrys’ authority and influence in Lithuanian politics gradually diminished. One reason was that he stayed abroad. Nevertheless, he still had huge political ambitions, dreaming of became the Lithuanian president. According to observers, such as Martinas Yčas, Juozas Purickis (1883-1934), Petras Klimas (1891-1969), Alfred E. Senn and A. Eidintas, Gabrys pretended to exert great political influence in Lithuania and tried to convince Lithuanians of his special powers in the international arena.

Using his influence in France, Gabrys attempted to undermine the delegation of Lithuania at the Paris Peace Conference, headed by Augustinas Voldemaras (1883-1942), by accusing it of being pro-German. To stay active in politics, he was even willing to cooperate with the Bolshevik Vincas Mickevičius-Kapsukas (1880-1935), while at the same time negotiating with some federalist-oriented Polish politicians about the possibility of re-establishing the Lithuanian-Polish Commonwealth. In spring 1919, Gabrys arrived in Lithuania with the French Mission.

Finally, after his attempted coup d'etat, aiming to overthrow President Antanas Smetona (1874-1944), Gabrys was forced to emigrate in August 1919. In 1920, after the Christian Democrats won the parliamentary election, Gabrys expected to become prime minister or minister of foreign affairs. But his expectations proved to be in vain (mainly due to his difficult and uncompromising character). He spent the remainder of his life in exile with no political influence in Lithuanian affairs.