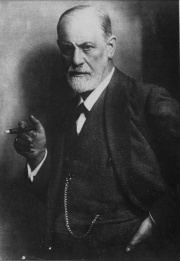 Sigmund Freud, the founding father of psychoanalysis, expressed a war-weariness and disappointment with the barbarity of the war that, after the final dissolution of the Habsburg Empire, gave way to nostalgia and resignation. In the aftermath of the conflict, Freud served as an expert in the Wagner-Jauregg process. His psychological profile of Woodrow Wilson, published posthumously, was the last echo of the Great War in Freud’s oeuvre.

Sigmund Freud’s (1856-1939) early reaction to the outbreak of the hostilities was, typically for an Austrian intellectual, enthusiastic.[1] Claiming, reportedly, that all his libido sided with Austria-Hungary, he saw his sons Jean-Martin Freud (1889-1967) and Ernst Freud (1892-1970) mobilized to serve in the Habsburg army. Yet, he soon began to express war-weariness and disappointment with the barbarity of all fighting powers, as documented in his Zeitgemäßes über Krieg und Tod (1915). As recalled by one of Freud’s patients, he observed the final dissolution of the Empire with nostalgia and resignation.[2] In the long run, the war experience is often credited with broadening Freud’s understanding of human nature beyond sexual drive, while the immediate aftermath of the conflict saw the rapid spread of psychoanalysis. Perhaps surprisingly, as early as 1919, Freud’s psychoanalysis was acknowledged by Anglo-Saxon scholars as bringing “an atmosphere of hope and promise for the future treatment of the greatest of human ills.”[3]

An epidemic of war neuroses that shook the Habsburg army in autumn 1914 raised expectations of psychiatrists while fueling personal and professional conflicts within this milieu. Though Freud’s own practice deteriorated, he and his disciples took active part in the controversial debate on the appropriate therapy. In the early war years, following the developments in the German Reich, a combination of suggestion, hypnosis and faradization (electrotherapy) enjoyed both state support and popularity within the medical milieu. Psychoanalysts serving as military doctors, notably Freud’s closest friend Sándor Ferenczi (1873-1933), a Hungarian, opposed this trend as dangerously blurring the lines between therapy and coercion. In autumn 1917, after some cases of patient death during faradization had been reported, Austria-Hungary’s Ministry of War banned electroshock therapy, admitting that it was largely ineffective. Logically, psychoanalysis, as an alternative treatment, was on the rise. This was shown, in September 1918, by the International Psychoanalysis Congress in Budapest. A few weeks later, Austria-Hungary ceased to exist.

There were at least two codas to Freud’s war engagement beside his own intellectual development. First, in autumn 1920, the psychiatrist took part in the so-called Wagner-Jauregg process. Julius Wagner-Jauregg (1857-1940), the main proponent of the brutal treatment of war neurotics, was accused by one of his former patients of the deliberate torturing of patients deemed simulants. Freud’s role was that of an independent expert. While his written opinion was basically in support of Wagner-Jauregg, during the process he grasped the opportunity to criticize one of the enemies of psychoanalysis. Though the process had no practical consequences, hostility between the two grew even more. Their conflict contributed to the image of psychoanalysis as “humanistic” psychiatry.[4]

A surprising recurrence of wartime problems in Freud’s oeuvre appeared in print in 1967, when William C. Bullitt (1891-1967), an American diplomat, published Freud’s opinion on President Woodrow Wilson’s (1856-1924) psychological profile, written in the early 1930s. Similar in tone to wartime propaganda, notably pseudo-psychological writings by Ernesto Lugaro (1870-1940),[5] Freud depicted Wilson as a hypochondriac, neurotic monomaniac with a father complex. One of his main theses was that Wilson, recognizing the injustice done to Austria and Germany in Paris, fell into psychosis. 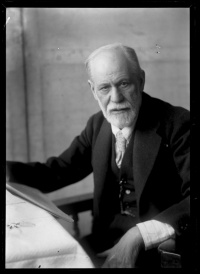