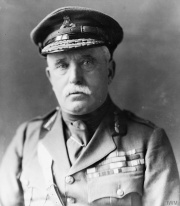 Sir John French was the commander of the British Expeditionary Force between July 1914 and December 1915.

Sir John French, 1st Earl of Ypres (1852-1925), commanded the British Expeditionary Force from 30 July 1914 to 18 December 1915. French was a hard-riding cavalryman, whose exploits during the South African War – when troops under his command relieved Kimberley – had made him one of the most famous soldiers in the Empire. He was appointed Chief of the Imperial General Staff in 1912 and on the outbreak of war was given command of the Expeditionary Force. He was authorized by the Secretary of War, Lord Horatio Herbert Kitchener (1850-1916), to cooperate with the French Army, but not to endanger the BEF – a somewhat paradoxical set of instructions that required diplomacy, tact and an unflappable temperament.

French was never a natural fit for such an onerous position. His personal courage was not in doubt, but he was temperamental and at times petty and highly-strung. He also waged an on-off feud with General Sir Horace Smith-Dorrien (1858-1930) throughout 1914-1915, which displayed a depressing lack of professionalism. When Smith-Dorrien (GOC II Corps) disobeyed his orders to stand and fight a desperate (although undoubtedly correct) rearguard action at Le Cateau on 26 August 1914, French marked him out as dangerous and disloyal. The two clashed repeatedly during the Second Battle of Ypres in April and May 1915, after Smith-Dorrien questioned his orders about making repeated, fruitless counter-attacks and the need to retreat. After being constantly undermined, Smith-Dorrien resigned on 6 May.

French struggled to deal with the vast responsibilities and changed circumstances of war on the Western Front throughout 1914-1915. He took the loss of friends and the destruction of the old Regular Army badly, and by the summer of 1915 he was visibly declining. French’s final battle, Loos in September 1915, was symptomatic of these troubles. The operational commander, Sir Douglas Haig (1861-1928) (GOC First Army), became convinced that the attack at Loos should go “all-out” and aim for a breakthrough, which he believed could be facilitated by using chlorine gas to precede the assault. Sir John would have preferred a more limited and proportional offensive, but found himself either unwilling or unable to insist upon this, letting a serious divergence of opinion emerge between himself and Haig over the scope and aims of the attack. Nevertheless, French kept control of the General Reserve – two divisions of XI Corps – which he used as a lever to control the increasingly independently-minded Haig. When the General Reserve was unable to intervene on the first day, Sir John was blamed for holding them too far in the rear and thus denying the BEF a breakthrough.

The fiasco of the reserves would prove to be French’s downfall. His despatch in The Times on 2 November 1915 contained basic errors on the timing and control of the reserves and provoked an angry response from Haig, who had opened a full-blown whispering campaign against his chief. Increasingly powerful voices in London were also beginning to share his concerns about French’s suitability, and he was relieved of command on 18 December 1915. French never forgave Haig for this betrayal. He returned to Britain as Commander-in-Chief Home Forces, but spent his time nursing his grievances, publishing his memoirs, 1914, in 1919. He died in 1925.