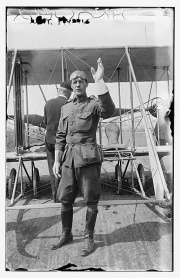 Benjamin Foulois (1879-1967) was born on 9 December 1879 in Washington, Connecticut, and grew up in an underprivileged household; he left high school early to work for his father. He enlisted twice in the United States Army, where he took part in the United States occupation of the Philippines. He earned his commission as a second lieutenant on 9 July 1901 due to his strong performance in the field and success at passing a commissioning exam.[1] He completed the Infantry and Cavalry School in 1905-1906 at Fort Leavenworth, Kansas, as well as the Army Signal School in 1907-1908, where he wrote about “The Tactical and Strategical Value of Dirigible Balloons and Aeronautical Flying Machines.”[2] This thesis topic led to his assignment in the office of the chief signal officer in Washington, D. C. where he served on the aeronautical board evaluating the first dirigible purchased by the army. In 1909, while still serving on this board, Foulois acted as a “navigator-passenger” for the final flight evaluations of the Wright brothers’ aircraft for the army, when he flew with Orville Wright (1871-1948). He was then among three army personnel who the Wright brothers were supposed to train as pilots. When the other two pilots, lieutenants Frank Lahm (1877-1963) and Frederic Humphreys (1883-1941), crashed the aircraft, the Wrights repaired the aircraft and left for home, having fulfilled their contract. Foulois had completed just under an hour of flight time.[3] The army then ordered Foulois to Fort Sam Houston, Texas, where his orders were to evaluate the aircraft and learn to fly on his own. As Foulois proudly observed, he was “the first, and the only pilot in history who learned to fly by mail.”[4] Foulois was now the only pilot in the army, since the other two returned to normal line duties. After this assignment, the army moved him into non-aviation related jobs, but Foulois soon returned to flight when he assisted the commandant of the Signal Corps Aviation School at San Diego, California. He organized and took command of the first tactical army air unit in 1914, the 1st Aero Squadron, relocating it to Oklahoma in 1915, and then Fort Sam Houston in 1916. His squadron’s eight Curtiss JN-3s deployed to support General John J. Pershing’s (1860-1948) punitive expedition against Francisco “Pancho” Villa (1878-1923) from March to August 1916.

While the Great War consumed much of the world, Foulois remained engaged in improving United States Army air power. In March 1917, after the Mexican expedition and service as an aeronautical officer in the southern department of the army, Foulois arrived in Washington, D. C. to be part of the recently named aviation section of the office of the chief signal officer, where he served until November 1917. He was responsible for overseeing the recent expansion of military aviation from one to seven aero squadrons of twelve aircraft each. He was holding this key position when a message from the French prime minister, Alexandre Ribot (1842-1923), arrived in the United States, requesting that the Americans cooperate with the French to produce a fleet of 4,500 aircraft – an “unprecedented expansion in military aviation.” Foulois, now promoted to temporary major, headed the group that determined United States aviation requirements for war. His time as the 1st Aero Squadron commander proved exceptionally useful, as he thoroughly understood operations and maintenance requirements for the aircraft.[5] Although the army general staff disagreed with his high figures – both numbers and cost – Foulois’ testimony to the house military affairs committee convinced congress to pass a $640 million appropriations bill on 24 July 1917, which the president immediately signed. Foulois believed this was the most significant achievement of his career.[6] On the same date, the army promoted Foulois to temporary brigadier general. At the end of October, Foulois and his staff headed to Europe to assist the war effort. On 27 November 1917, General Pershing, remembering Foulois’ notable performance during the punitive expedition, appointed Foulois as the chief of the Air Service, Air Expeditionary Forces (AEF). Foulois and his young staff immediately earned the contempt of many aviators who had already been in country, including the outspoken and brash Brigadier General William “Billy” Mitchell (1879-1936), who saw the incoming staff as “carpetbaggers.”[7] Even though Foulois had some successes, such as the creation of a supply depot system for aircraft and personnel, Pershing reorganized his staff in May 1918, tapping the more experienced leader, Brigadier General Mason Patrick (1863-1942), as the new chief, and demoting Foulois as the chief of the Air Service, First Army, supporting a notional American field army not yet formed. Revealing his humble nature, Foulois requested to act as Patrick’s assistant, and recommended his professional rival, Mitchell, be given command of combat air operations in the First Army – to include the great air battles at St. Mihiel and the Meuse-Argonne.

Similar to other air power leaders and adherents, Foulois continued to fight for an independent service following his return to the United States. The quick demobilization after the war affected the burgeoning air service, especially since the army general staff did not fully appreciate air power’s combat contributions. After the Army Reorganization Act of 1920, which did not give the air service autonomy, Foulois headed to Germany as the air attaché. In addition to advocating for air force independence, he often politicked for positions within the air branch, finally becoming assistant chief of the Air Corps in December 1927. He organized the Air Corps’ 1931 maneuvers – a large exercise that transpired without a hitch – earning him the coveted Mackay Trophy, for the most meritorious flight of the year. This helped lead to his elevation as the chief of the Air Corps in July 1931. In an impetuous attempt to prove the Air Corps’ worth, and to help facilitate independence, Foulois offered the Air Corps to move United States mail after President Franklin D. Roosevelt (1882-1945) cancelled government contracts with commercial aviation. The Air Corps was not prepared for this new mission, and it failed in the attempt. A number of serious issues led to congressional investigations, in which Foulois became a casualty. He retired in 1935, after seeing through the creation of the GHQ Air Force, pushing the Air Corps Tactical School to investigate strategic bombardment, and procuring a bomber as required by the doctrine. 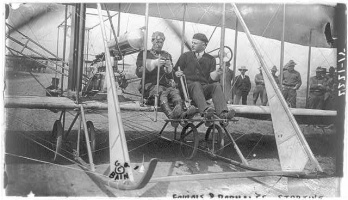 Major Benjamin Foulois with Officers of the U.S. Navy and Army