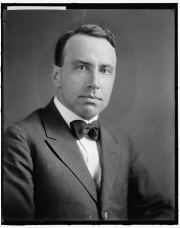 Raymond Blaine Fosdick served as the Chairman for the Commission on Training Camp Activities for the United States Army during its involvement in the First World War. In this position, he monitored soldier morale and devised programs to see to its maintenance.

Raymond Blaine Fosdick (1883-1972) served as the Chairman for the Commission on Training Camp Activities for the United States Army during its involvement in the First World War. A lawyer and public administrator with a strong interest in social reform, Fosdick graduated from Princeton in 1905 and the New York Law School in 1908. By 1910 he had become the Commissioner of Accounts for the City of New York, where he fought corruption. In 1913, he joined the John D. Rockefeller (1839-1937) funded Bureau of Social Hygiene, and completed a study of police administration in Europe (European Police Systems, 1915). In 1915-1916, he worked with the New York City and International Boards of Education on educational facilities.

Involvement in the First World War↑

In April 1917, Secretary of War Newton D. Baker (1871-1937) appointed Fosdick Chairman of the newly created Commission on Training Camp Activities (CTCA), largely based on Fosdick’s experience as a special representative of the War Department investigating troop conditions on the Mexican Border during the Mexican Punitive Expedition in 1916. As a progressive dedicated to the ideas of social hygiene popular at the time, Fosdick approached his new duties with the CTCA from a moral perspective. On the Mexican border he had seen the effects of alcohol, prostitution, and venereal disease on US troops, and recognized the need to preserve combat power by limiting vice. He also recognized, however, that nature abhors a vacuum. Removal of vice would not be enough. Fosdick sought to replace vice with activities beneficial to the soldier - activities that would keep the Army healthy, clean, and morally straight. He therefore organized the CTCA into six divisions, departments and committees: the Athletic, Social Hygiene, and Law Enforcement Divisions, the Camp Music Department, the Military Entertainment Committee, and the National Smileage Committee, which sold coupon books to fund tickets for soldiers to attend wholesome entertainments. Fosdick also worked closely with organizations such as the Young Men’s Christian Association, the Red Cross, and the Salvation Army. Toward the end of the war, Fosdick had modified his views - stressing morale over morals. He felt that the greatest threat to morale was poor officer-enlisted relations. He noted that the American Expeditionary Forces in France were filled with intelligent soldiers who were beginning to challenge the absolute authority of their sometimes incompetent officers, and suggested to the War Department that this problem was more significant than those in the moral realm. Fosdick’s findings regarding officer-enlisted relations were validated in the Second World War.

After World War I, Fosdick served as Undersecretary for the League of Nations until it became apparent that the United States would not join the League. He then returned to the Bureau of Social Hygiene and later private law practice until he was appointed President of the Rockefeller Foundation in 1936, where he served until his retirement in 1948.