This article explores film production and screening in the Ottoman Empire during the First World War. Cinema initially became available through the private entrepreneurship of Ottoman merchants and their connection with Western European film companies. During the war, film production in the empire developed as an extension of the Military Office of Cinema and charity organizations, such as the Society of National Defense and Society of Disabled Veterans. These film productions exemplify propaganda efforts, as they highlight news from the battlefield and the Ottomans’ ideological collaboration with its allies. Furthermore, the article briefly illustrates how the Central Powers used films to spread their war aims in the region and provided the Ottomans with technical assistance and equipment to produce films.

The beginnings of cinema in the Ottoman Empire were marked by a dependence on itinerant operators’ screenings and contact with foreign film companies. During the First World War, the Ottoman state gradually took on film production in the empire. Officials from various state institutions, members of the army, and charity organizations produced films and generated income from screenings for the war cause. Even though private enterprise in the realm of film screening took off immediately, the initial entrepreneurs were chiefly connected to the army. Both state sponsorship and censorship affected filmmaking in the empire. İsmail Enver Pasha (1881-1922), the minister of war and an avid photographer, was a supporter of cinema.[1] Today, film studies scholars consider him the founder of cinema in Turkey. Under İsmail Enver Pasha’s leadership, the ministry of war founded the Military Office of Cinema (Merkez Ordu Sinema Dairesi, MOC) around 1915.[2] Sources from the Prime Ministry Ottoman Archives refer to this government office as the Army Cinema (Ordu Sineması) or Central Commandership of Istanbul’s Army Cinema (Dersaâdet Merkez Kumandanlığı Ordu Sineması). It appears that the ministry of war later renamed the institution the Military Office of Cinema. The Central Commandership of Istanbul ran a film studio, called the Central Commandership of Army Film Studio (Dersaâdet Merkez Kumandanlığı Ordu Sinema Atölyesi), which also included a motion-picture theatre. Currently, the Turkish Armed Forces’ Photo Film Centre (Türk Silahlı Kuvvetleri Foto Film Merkezi) houses the original prints of early and silent films from the MOC alongside those of anonymous private collectors and other institutions.[3]

The MOC not only supported the making of the earliest documentaries in the empire, but also actively provided the necessary technology and staff. The training gained here led some of the technical staff, chiefly soldiers, to become pioneers of filmmaking, film theatre entrepreneurs, and film distributors outside of the military. For instance, Sigmund Weinberg (1868-1936) produced films for the MOC. Reserve Officer Fuat Bey [Uzkınay] (1888-1956) also worked as a cinematographer and directed a number of documentaries and fiction films for this office as well as for charity organizations. Another filmmaker with a background in the army was Cemil Filmer (1895-1990), who worked as cameraman for the MOC and later founded Lale Film and opened a number of cinemas (i.e. Kuşdili Cinema, Lale Cinema, and Tan Cinema) in the empire.[4] Two charity organizations, the Society of National Defense (Müdâfaa-i Milliye Cemiyeti) and the Society of Disabled Veterans (Malûl Gaziler Cemiyeti), founded to support the war, produced fiction films and documentaries to raise funds for the military, and to support war orphans and veterans.[5] During the war years, these institutions collaborated and often distributed their revenue from film tickets to other charities (i.e. the Naval Society/Donanma Cemiyeti and the Ottoman Red Crescent/Hilal-i Ahmer). In short, film production in its infancy developed as an extension of these state institutions rather than private enterprise in the Ottoman Empire.[6]

The Ottoman state was not only instrumental in sponsoring film screening and production, but also placed restrictions on its content. In 1914, the ministry of war took control by declaring the Censorship Act, which sought to manage screenings of films along with other entertainment and communication.[7] While the Ottoman state collaborated with its allies on propaganda, it was cautious in doing so. The Censorship Act served to filter out the films and messages that were contrary to Ottoman war aims.[8] For example, a report sent from the Ottoman authorities in Thessaloniki to the foreign ministry reported a film screening held for French, Greek and English soldiers at the Olympia Cinema in that city in 1915, indicating the Allies’ propaganda activities.[9] The Ottoman authorities did not welcome propaganda against their own ideology, and thus enforced military censorship in an attempt to guard the war cause and unity amongst civilians and the army. This intervention paved the way for the above-mentioned institutions’ domination over cinema and led to their control of wartime propaganda. It is clear that the Ottoman state directly limited the screening of films, yet it also endorsed filmmaking for ideological reasons during the war years.

Textual sources and films highlight that most of the Ottoman wartime films were propaganda films that showcased political leaders, the importance of the war’s cause, Ottoman unity, victorious battlefield scenes, images of prisoners of war, and protests against the occupation of Izmir. In addition, war logistics, such as the dispatch of supplies and ammunition, and images of Ottoman soldiers and allies, were included in the footage. These productions show that the ministry of war, the MOC, and charity organizations attempted to create a sense of patriotism and solidarity by producing and screening propaganda films. One of the army documentaries is The Destruction of the Russian Monument in San Stefano (Ayastefanos’taki Rus Abidesi’nin Yıkılışı/Moskof Heykelinin Tahribi), filmed in November 1914 by Reserve Officer Fuat Bey.[10] The film was co-produced with the Austrian Sascha-Meester Gesellschaft and post-production was done in Budapest.[11] This newsreel, which has not survived, chronicled the monument’s destruction. The monument was erected by the Russians to commemorate their soldiers who died during the Russo-Turkish War (1877-1878). According to the Ottoman public and state, the monument was a symbol of a previous Russian victory as the Russian troops invaded the Yeșilköy (San Stefano) neighborhood of Istanbul during this earlier war. The army’s making of this film demonstrates that the authorities aimed to create a supportive atmosphere for their alliance with the Central Powers. On 25 December 1914, right after the Ottoman entry into the war, the newspaper İkdam announced the film’s screening at Istanbul’s Ali Efendi Cinema alongside war reports and scenes from the Greater Holy War (Cihâd-ı Ekber/jihad) that was declared in mid-November 1914.[12] Today, the ministry of culture and tourism of Turkey, along with mainstream scholars, considers The Destruction of the Russian Monument in San Stefano the first Turkish film, in an attempt to construct a national history of cinema in the country. Fuat Bey’s Turkish ethnicity made him the perfect candidate to become the “father of Turkish cinema.”[13] This claim is controversial for three reasons: firstly, the Ottoman army collaborated with the Austrian-Hungarians in making this film, and Fuat Bey probably only handled the camera; secondly, there were other films made during the imperial period prior to 1914, such as the films of the brothers Milton Manaki (1882-1964) and Yanaki Manaki (1878-1954), Sigmund Weinberg and semi-state-owned charity organizations’ productions (i.e. the Naval Society).[14] Lastly, the history of Ottoman filmmaking has been Turkified by selective memory for the sake of a national cinema history rather than an imperial one.

Films from the Battlefield↑

The Ottoman Military Office of Cinema aimed to influence public opinion and support patriotic solidarity, similar to the British Expeditionary Force's encouragement of collectivism and solidarity through propaganda films.[15] However, production was extremely limited due to the war conditions and the scarcity of technical equipment. The Ottomans made only a few wartime newsreels. Films such as Retreat of the Allied Forces at the Battle of Anafartalar (Anafartalar Muharebesi’nde İtilaf Ordularının Püskürtülmesi, 1915), Battles of Gallipoli (Çanakkale Muharebeleri, 1916), and Visit of the German Emperor to Gallipoli (Alman İmparatoru’nun Çanakkale Ziyareti, 1917) mostly emphasized the victory of Gallipoli. Some other undiscovered films include the ones from the Galician and Romanian fronts.[16] Photography teacher Necati Bey from the School of Teacher Training (Darülmuallimîn-i Âliye) directed several films at the Gallipoli front in 1915 under the auspices of the Society of National Defense. After Necati Bey’s success, Enver Pasha ordered him to shoot more films, but the wartime shortage of filmstrips prevented further productions.[17] In early August 1917, the ministry of war charged Sigmund Weinberg with capturing scenes from the Galician and Romanian fronts. Weinberg first paid a visit to Berlin to get technical materials and then filmed Ottoman soldiers on the Galician and Romanian fronts.[18] While working for the MOC, merchant Weinberg also distributed Pathé films in the empire. The intent was to screen the battlefield footage in Istanbul’s cinemas.

The Ottoman state screened wartime newsreels for students, soldiers, and civilians, for training purposes and also to lift spirits. For example, Major Hafız Hakkı Pasha (1878-1915), serving in the third army, wished to raise morale by screening films to soldiers in Erzurum in 1915.[19] Hafız Hakkı was an important figure in the army who wanted to improve soldiers’ conditions by introducing educational reforms using the latest technology.[20] Likewise, propaganda films about Ottoman military maneuvers on the Galician and Romanian fronts were screened on 9 June 1917 for a group of experts at Beyoğlu’s Sinema Palas in Istanbul.[21] Apart from private cinemas, the Army Museum (Askeri Müze) in the Sultanahmet district of Istanbul hosted screenings of newsreels and other genres.[22] The army’s interest in employing cinema’s propagandistic role is also evident in the Ottoman Reserve Officers’ Association’s attempt to establish an additional cinema for the benefit of the army in 1919. However, the empire’s defeat and occupation interrupted this plan.[23]

Central Powers’ Use of Film in the Ottoman Empire↑

During the First World War, both the Central and Entente Powers employed films for wider political goals. Germany and Austria-Hungary screened their patriotic films at conferences and exhibitions throughout the empire. They also provided filmmaking training, technical tools, and raw film material to the Ottomans. The Central Powers’ productions screened in the region chiefly praised political leaders and attributed a “godly” role to them. A number of German propaganda films were screened in Istanbul in 1915.[24] For example, the newspaper Ferah reported that German films had a longer running time than expected due to public demand. In this exhibition, seven films were screened; the propagandistic ones were about the heroes of the German-French War (1870-1871) and maneuvers of Germany during the war in 1914. The announcement includes a slogan attributed to Otto von Bismarck (1815-1898): “We, the Germans, fear God and but nothing else in the world”.[25] In 1916, the Austrian Gold Smith Company asked for a permit to screen and film in the empire. The Ottoman authorities granted the request in Anatolia, thus, Austrians could screen wartime films. However, the local police insisted on keeping an eye on travelling operators. Finally, Gold Smith was not allowed to make further films.[26] Locals and the elite were critical about the Central Powers’ propagandistic films for imposing their own culture; thus, the authorities sometimes banned their screening.[27]

Film production gradually became more possible through army resources and charity institutions’ initiatives in the Ottoman Empire during the First World War. The post-war years witnessed the gradual bloom of the cinema market with the enterprise of international film corporations and local film production companies.[28] Most of the wartime films represent the notion of propaganda, consisting of the state’s religious and political justifications for the war effort. Reporting on the war was another aspect of these productions. However, the scarcity of materials and equipment limited the empire’s film production, which was directly dependent on Western resources. 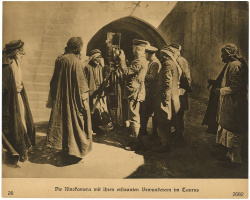