Eupen-Malmedy is the name given to the two districts that Germany ceded to Belgium in 1920 as a consequence of the Treaty of Versailles. This cession and the semblance of a “referendum”, organised in 1920, turned the territory into a Belgian-German conflict space during the interwar years.

Before and during the First World War↑

Eupen-Malmedy is the name given to the two combined Kreise (districts) that Germany ceded to Belgium in 1920, according to the terms of the Treaty of Versailles. The two districts consisted of 60,000 inhabitants, of which some 10,000 belonged to the Walloon minority. One-third of the population of the Malmedy district was Walloon - or French-speaking, mainly in and around the district town itself.

The beginning of the First World War in 1914 brought a century of Prussia's social and economic relations with Belgium to an abrupt end. The border population’s loyalty to the German Empire, however, was not challenged, even if the “Kulturkampf” and a policy of “Germanisation” had strengthened a cultural particularism in the Walloon localities. By the end of the war, 1,800 soldiers from Eupen-Malmedy had fallen fighting under the German flag. The districts remained under French and British military occupation until Belgian troops arrived in August 1919.

Belgium declared ambitious but less realistic claims for Dutch, Luxembourgian, and German (“to the Rhine”) territories. In parallel, expansionist movements aimed to integrate into the Kingdom all the territories that had belonged to the precursors of the Belgian State, from the Late Middle Ages to the Early Modern times. Belgium used history as pretext, legitimising expansion by using terms like “de-annexation” and “recovered brothers”. More specific arguments for the claims for the two districts were cultural (“our Alsace-Lorraine” for the Walloon localities), strategic (military camp of Elsenborn), and economic (Eupen).

The Treaty of Versailles↑

In Versailles, a commission for Belgian-German affairs, led by the French diplomat André Tardieu (1876–1945), dealt with the Belgian claims to German territories. Significantly, though, neither Belgium nor Germany participated in the commission. Articles 32–34 of the Treaty of Versailles outlined the cession of German territories to Belgium. The territory of Neutral-Moresnet, which had been under a Prussian-Dutch and Prussian-Belgian condominium since 1815, was directly attached to Belgium (Article 32), as was the municipality of Preußisch-Moresnet (Article 33). In Article 34 the Treaty gave the population of the two districts Eupen and Malmedy the right to protest, in written form, against their integration into Belgium.

Reaction to the Treaty↑

Lists were laid out in the town halls of the two district towns from 10 January 1920 to 23 July 1920. The Belgian transitional administration, under High Commissioner General Herman Baltia (1863­–1938), was responsible for the organisation and control of this process. Ultimately, only 271 of 33,726 voters signed the protest list, of which 202 were German state servants. After the Belgian government reported this result, the League of Nations confirmed the change of status on 20 September 1920.

Protests against the process grew quickly, as it had been neither free nor secret. In the relevant territories there were several demonstrations. Grievances from German authorities and institutions remained unheard. In Belgium, representatives of the Labour Party (Parti Ouvrier Belge, or POB), like Louis de Brouckère (1870-1951), were the most critical of the petite farce belge (“little Belgian farce”).[1]

In the end, the so-called “referendum” reflected the negotiations at Versailles. On the one hand, the “martyr nation” of Belgium should obtain territorial reparations; on the other, a semblance of the right to self-determination had to be preserved. Articles 36–37 of the Treaty contained regulations and transitional delays regarding the laws of citizenship. The line of the German-Belgian border was finally fixed by a League of Nations commission in 1922.

The annexation and the conduct of the “referendum” remained controversial during the whole interwar period. These actions were also the origins of pro-German revisionism, promoted by German authorities, which ended in confrontation with Belgian integration policy. During World War II Eupen-Malmedy was re-annexed by the Third Reich but became Belgian again in 1944. 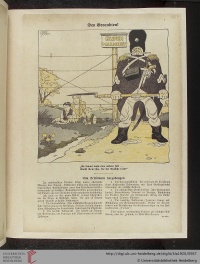 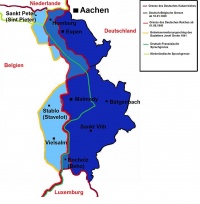