After leading the coup that brought the Committee of Union and Progress to power, Enver was appointed chief of staff and war minister. Convinced of a German victory, he decided to join World War One. In November 1918, he fled to Germany and then to Turkestan, where he organized Muslim forces against the Bolsheviks. He was killed in battle.

Enver Pasha (1881-1922) was an Ottoman general and commander of the Ottoman armies during World War One. After graduating from the military academy in 1902 as a staff captain, he was posted to the Third Army in Macedonia where he fought Greek and Bulgarian nationalist guerrillas. In September 1906, he was assigned to the Third Army headquarters in Manastir, where he joined the Committee of Union and Progress (CUP), the leading organization in the Young Turk movement. In June 1908, Enver took to the hills, following Adjutant-Major Ahmed Niyazi Bey (1873-1913). After the revolution of July 1908, the CUP promoted him as a “hero of liberty”. His rank at the time was that of staff major; he was twenty-seven years old.

The constitutional government, feeling threatened by the charismatic appeal of junior officers like Enver, posted some of them as military attachés to Ottoman missions; Enver was sent to Berlin on 13 January 1909. However, the outbreak of the counter-revolution in Istanbul in April brought him back to the capital with the Third Army. His role in crushing the reactionary mutiny enhanced his popularity.

On 15 May 1911, Enver entered the Ottoman household, marrying Emine Naciye Sultan. Later in 1911, he served with distinction in Libya, organizing resistance to the Italian army of occupation. He returned to Istanbul on 20 January 1912, in the wake of the disastrous defeats of the Balkan Wars of 1912-1913. On 23 January 1913, he led the coup d’état that overthrew the defeatist Mehmed Kâmil Pasha (1833-1913) cabinet and brought the CUP to power. Enver was still only a lieutenant colonel.

Enver led the Ottoman forces that recaptured Edirne from Bulgaria in July 1913 and his prestige soared. He was promoted to the rank of colonel on 18 December 1912. When the government needed a young and dynamic war minister to purge and reform the army, Enver was the obvious choice. He was promoted to the rank of General with the title of Pasha, and appointed chief of staff and war minister on 3 January 1914. Enver purged the army of officers of the old school and created a new army up to the standard of Europe. He began a new educational program so that recruits could learn to read with the new phonetic alphabet. He was pro-German because he believed that the German alliance served Ottoman interests best. Had Berlin rebuffed the CUP’s offer of an alliance, Enver would have been willing to turn to the Triple Entente.

After the signing of the Ottoman-German Alliance on 2 August 1914, the presence of the Otto Liman von Sanders (1855-1929) military mission, and German financial loans, Istanbul became totally dependent on Berlin. General Friedrich Bronsart von Schellendorf (1864-1950) was Chief of Staff of the Ottoman Army; as a result, Ottoman policy throughout the war was also directed by German strategic needs. The arrival of two German ships, the Goeben and the Breslau, strengthened Germany’s position, giving her control over the Ottoman navy.

Convinced of German victory, Enver decided to join the war. On 22 October, he proposed that the Ottoman fleet under Admiral Wilhelm Souchon (1864-1946) establish naval supremacy in the Black Sea without prior declaration of war on Russia. On 24 October, Enver ordered the Ottoman captains to follow the German admiral’s instructions; Souchon entered the Black Sea on 29 October, leading to what became known as the "Black Sea incident". A few days later, Istanbul was at war.

Enver may have given the orders, but the timing of the incident was Germany’s. The same was true for the Sarıkamiş campaign. When the Austrian offensive against Serbia failed, Berlin saw an urgent need to draw Russian troops from the Austrian front. They therefore urged Enver to launch an offensive in the Caucasus.

On 6 December, Enver took command of the Sarıkamış campaign. The operation began on 22 December under difficult circumstances. In January 1915, the Russians, seeing Ottoman weakness, launched their own encirclement attack resulting in huge Ottoman losses. The Russians destroyed much of the Ottoman Third Army, leaving Enver with less than a seventh of the 90,000 men with which he had begun his campaign. After the defeat, Liman von Sanders blamed Bronsart von Schellendorff for the plan and its execution. He called for Bronsart’s resignation, but Enver protected him, “not least because to have done otherwise would have acknowledged that a German, not he, was the de facto commander...”[1]

After the Sarıkamış disaster, Enver never again led an army in a campaign. He remained Minister of War, essentially signing plans made in Berlin and submitted to him by General von Bronsart. However, Enver continued to be instrumental in the CUP’s decisions, especially about relations with Germany. Thus, when the Entente launched the Gallipoli campaign, Enver sent Colmar Freiherr von der Goltz (1843-1916) to Germany and Austria. He requested munitions, the opening of the road through Serbia and the sending of submarines to Turkish waters in order to blunt the Allied naval attack.

Commanding the Forces of the Capital↑

Enver’s position was ceremonial, designed to maintain morale; for example, after the British bombardment of Izmir, he visited the city. He also visited Gallipoli on many occasions. His position strengthened after the failure of the Entente navy and the success of the Ottoman Army at Gallipoli. In April 1915, Enver was appointed aide-de-camp to the Mehmed V, Sultan of the Turks (1844-1918), replacing von der Goltz. But with the landing of Entente troops on Gallipoli in April, Enver asked the government on 2 May to resettle the Armenian population that might support the Armenian Revolutionary Federation away from the war zones. The Armenian community of Istanbul led by the Patriarch was not deported.

The Entente’s evacuation of Gallipoli in January 1916 boosted Enver’s prestige dramatically and he basked in its glory when he made a speech in parliament on 10 January claiming that he had been confident that the enemy would not be able to force the Straits. Throughout the war, Enver Pasha remained convinced of a German victory, believing that Berlin would treat the Ottomans fairly after victory. He even sent Ottoman troops to the Western Front and by the fall of 1916, there were seven Ottoman divisions on the fronts in Galicia, Romania, and Macedonia. Though he no longer had active command, Enver traveled throughout the Empire. The press reported that he was in Jerusalem touring the Arab provinces on 1 March. On 11 September, Enver arrived at Pless for talks with the German high command.

With the appointment of Mehmet Talat Pasha (1874-1921) as grand vezir on 4 February 1917, Enver’s position within the CUP began to decline. He became isolated in the cabinet, surrounded by Talat’s men who neutralized Enver’s pro-German war party. Later in April, Talat negotiated General Erich von Falkenhayn’s (1861-1922) appointment to take charge of the war in Iraq so that Enver could not raise any objections. Even the German high command disregarded his aim to hold Jerusalem and, on 7 December 1917, ordered Ottoman troops from the city, leaving it to the British.

By early 1918, Ambassador Johann Heinrich, Graf von Bernstorff (1862-1939) wrote that Enver’s position had so weakened that he was now supported only by the embassy and Talat Pasha; there was even talk of removing him as war minister. But he was kept on, possibly because it was difficult to agree on a replacement during the fighting. Following the Bolshevik revolution he again came into his own. He talked of “Islamic unity” and saw the revolution as an opportunity to create a new empire embracing the Turkic/Islamic peoples of Tsarist Russia. This romantic dream failed to materialize, partly because it was unrealistic, and partly because of Germany’s ambitions. The Ottoman armies were defeated on other fronts and forced to sign an armistice with Britain in October 1918. In November, Enver and some other CUP leaders fled to Germany. Enver then went to Turkestan where he organized Muslim forces against the Bolsheviks. He was killed in battle in Tajikistan on 4 August 1922.

Nationalist historiography has portrayed Enver Pasha as a pan-Turanist. Though he may have shared elements of this ideology, his actions suggest that he placed his faith in Ottomanism, which became increasingly Islamist as non-Muslim communities broke away from the Empire. Moreover, the CUP itself believed in Ottomanism; it married some of its military supporters to Ottoman princesses to link its fortunes to those of the dynasty. Islam was the bond that united the various Muslim ethnic groups in the empire; that is why the Jihad was proclaimed as soon as Istanbul entered the war. Not only would it unify all Muslim Ottomans, it was also expected to subvert the loyalty of Muslims living under British, French, and Russian rule. Later when Enver fought the Bolsheviks he named his force the army of Islam (Islam Ordusu), though a Turanist might have called it the "Turkish army". Throughout the national struggle and until the creation of the Republic of Turkey, Islam remained the dominant ideological strand in the Ottoman Empire. 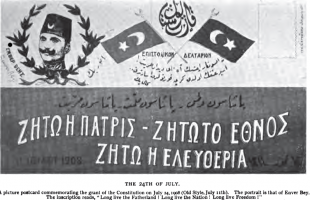 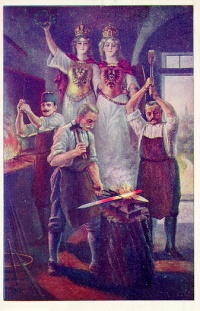 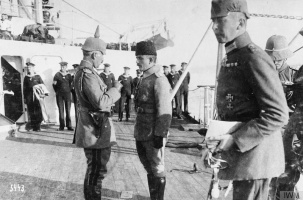 Enver and Wilhelm II aboard the SMS Goeben 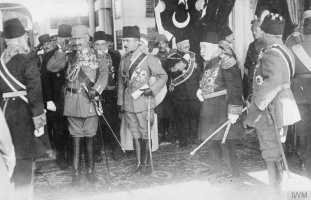