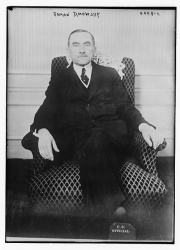 Roman Stanisław Dmowski was a Polish politician and most importantly the co-founder of National Democracy in Poland before the First World War and during the interwar period. He was also the co-founder of Polish National Committee in 1917 and served as Minister of Foreign Affairs in 1923.

Descended from a pauperized noble family, Roman Stanisław Dmowski’s (1864-1939) father was impoverished. Politically active since his student times, Dmowski became a member of the Polish Youth Association “Zet” (Związek Młodzieży Polskiej “Zet”) in 1888. In 1889 he joined the Polish League (Liga Polska), a Polish independence movement. In 1892 he was imprisoned for five months by the Russian authorities for the organisation of a student demonstration. In 1893 Dmowski co-organized the moderate right-wing National League (Liga Narodowa). In 1895, he settled in Lviv, which was then in Austria-Hungary.

In 1897 Dmowski co-founded the National-Democratic Party (Stronnictwo Narodowo-Demokratyczne), whose goal was to unite Poles in all three parts of divided Poland. Dmowski aimed to create a disciplined and committed political group. The eventual goal of his policy was the independence of Poland, but in the face of growing German power, he argued on tactical grounds for Polish cooperation with tsarist Russia.

From 1895 to 1905, Dmowski lived in Galicia. During the Russo-Japanese War, Dmowski traveled to Japan to prevent the Japanese government from assisting Józef Piłsudski (1867–1935) in launching a planned insurrection in Poland.

In 1905 Dmowski returned to Warsaw. When the revolution broke out in Russia the same year, he opposed direct confrontation with the Russians and argued for co-operation with the tsarist authorities. Therefore he welcomed Nicholas II, Emperor of Russia’s (1868–1918) October Manifesto, hoping that it would be a first step toward wider autonomy of the Congress Kingdom. He did not take part in the elections for the First Duma, but the National Democrats won a majority of seats in the Kingdom. In 1907 Dmowski was elected to the Second Duma and became a leader of the Polish caucus. Later that year he was elected to the Third Duma. In 1912 he lost his seat in the Fourth Duma. Prior to 1914 he was prepared to settle for Polish autonomy within the Russian Empire, seeing it as a necessary step toward complete independence. Dmowski was anxious about growing German power, and therefore argued that a strong Russia was in Poland's best interest, as it provided a better prospect for the reunification of all Polish territories under one authority.

On 12 August 1914 Dmowski managed to return to St. Petersburg from Warsaw. He reluctantly supported the Nicholas Nikolaevich, Grand Duke of Russia's (1856–1929) Manifesto on the Polish Nation of 15 August 1914, which vaguely promised a unification of all Polish territories and gave greater autonomy to “Congress Poland” after the war. Dmowski drew up plans for the annexation of East and West Galicia, the Poznań area, West and East Prussia, and Upper Silesia into the Kingdom of Poland in the event of the defeat of Germany and Austria-Hungary. However he did not manage to convince Russia to make firmer commitments toward the Polish cause.

In autumn 1915, Dmowski left Russia and toured Italy, France, and the United Kingdom to lobby for the Polish cause. On 18 January 1916 he presented Count Alexander Izvolsky (1856–1919), the Russian ambassador in Paris, with a memorandum in which he proposed that Russia should declare Polish independence. The Russian government declined, opening the way for a similar declaration by the Central Powers. After the Act of 5 November 1916, he demanded that the Entente should issue a similar declaration. In January and February 1917, Dmowski created a set of diplomatic guidelines for Polish representation abroad. After the outbreak of the February Revolution in Russia, Dmowski understood that the fate of Poland would be decided by the western powers. On 15 August 1917 the Polish National Committee (PNC) was created in Lausanne, which was recognized by France (20 September), the United Kingdom (15 October), Italy (30 October), and the United States (10 November) as an official representation of the Polish state.

Meanwhile, Dmowski and the PNC moved to Paris, which became the center of his activities. They started to organize Polish military forces in France (the so-called Blue Army) to fight alongside the Western allies. By early 1919, the forces numbered nearly 70,000 well-equipped soldiers. Dmowski’s PNC was recognized by western powers as the legitimate government of Poland when the ceasefire was signed on 11 November 1918.

At the end of the First World War, Dmowski’s Polish National Committee (PNC) was to be the legitimate government of Poland, but he had to take into account Józef Piłsudski’s government position in Poland. At the behest of Ignacy Paderewski (1860–1941), Dmowski agreed to cooperate with Piłsudski. Therefore Dmowski and the PNC represented Poland at the Paris Peace Conference and accepted Piłsudski as the provisional chief of Polish state.

On 16 January 1919, Dmowski and the PNC acknowledged the new cabinet created in Warsaw by Paderewski. Because the PNC became the official delegation to the conference, Dmowski became the de facto minister of foreign affairs without bearing the official title. He was chief Polish negotiator at the Paris Peace Conference and a signatory of the Versailles Treaty (28 June 1919). On 10 September 1919 he also signed the Saint-Germain treaty with Austria.

Dmowski was disappointed with the Treaty of Versailles, mostly because he was strongly opposed to the Minorities Treaty imposed on Poland, but also because he wanted the German-Polish border to be somewhat farther to the west than the treaty allowed (to include Upper Silesia and parts of Middle Silesia).

Dmowski favoured and idea of a “national state”, in which minorities would be assimilated into Polish communities, whereas Piłsudski took his cue from the historical multi-ethnic state based on the example of the old Commonwealth of Poland and Lithuania. Dmowski viewed Piłsudski’s ideas as dangerous, as he believed that the existence of large number of ethnic minorities would weaken the integrity and security of Poland. In January 1919 he was elected to the first independent parliament of Poland (Sejm), but due to severe pneumonia, he was unable to return until May 1920.

During the Polish-Soviet War (1919–1921), Dmowski was included in the Council of National Defense, created on 1 July 1920. The National-Democratic Party, afraid of Pilsudski’s position and aspirations, made sure that the executive position was weak in influencing the creation of the March Consitution (1921). Dmowski, who had already withdrawn from parliamentary engagements, had limited influence on the shape of the constitution but supported the attitude of National Democrats.

Dmowski was outraged by the election of Gabriel Narutowicz (1865–1922) for the Polish presidency in 1922. He believed the election was a sign that minorities were powerful enough to shape Polish politics. The National Democrats started a major campaign against the new president, which ended in his assassination by the painter Eligiusz Niewiadomski (1869–1923). Although Dmowski was not directly responsible for this assassination, he still, according to many historians, bears a moral responsibility for the whole affair. In autumn and early winter 1923, Dmowski was a Minister of Foreign Affairs in the cabinet of Premier Wincenty Witos (1874–1945). This was Dmowski’s last official post.

After Piłsudski’s May coup d’etat in 1926, Dmowski tried to unify national and Catholic political movements and organizations. In 1926 he created the Camp of Great Poland (Obóz Wielkiej Polski) a nationalist organisation created to unify right-wing opposition against Piłsudski, and in 1928 he created the National Party (Stronnictwo Narodowe). After the Camp of Great Poland was declared illegal in 1933, he intensified his activities against the Piłsudski regime. He played a crucial role in the internal affairs of the National Party and was chief ideologue of this movement.

In 1934 Dmowski moved to Warsaw. In 1937 he had a stroke that partially incapacitated him. He spent the last years of his life in Drozdowo near Łomża, where he died on 2 January 1939. He was buried in Warsaw, and his funeral was an occasion for a large gathering of National Democrats.