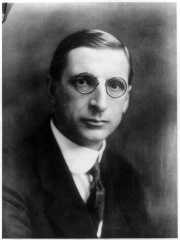 De Valera was a prominent figure in the Easter 1916 rebellion against British rule. He subsequently became head of the Irish government.

Éamon de Valera (1882-1975) was born in the United States of an Irish mother and a Spanish father. He was raised in Ireland, where he overcame an impoverished background. He taught mathematics in Dublin and became committed to reviving the Irish language. In 1913 he joined the paramilitary Irish Volunteers and soon became prominent in their ranks.

In the Easter Rising, de Valera commanded the garrison that inflicted the heaviest casualties on British forces. After the insurgents surrendered, his death sentence was commuted to life imprisonment. This was probably because his court-martial was delayed until the execution of several other rebels had provoked widespread criticism. He was the sole surviving garrison commander and soon became the leader of the Irish soldiers imprisoned in England. It was in the Dartmoor, Maidstone and Lewes jails that he first displayed qualities of leadership.

Despite his life sentence he – along with his colleagues – was released after little more than a year in prison. Almost immediately he was selected as candidate of the Sinn Féin party in a by-election in East Clare. He won by a margin of more than two to one. Some months later, in October 1917, he was elected president of the party, and also of the Irish Volunteers. He ensured that Sinn Féin abandoned its objective of a dual monarchy similar to the Austro-Hungarian pattern and that it committed itself to establishing an Irish republic.

De Valera had moved directly from cultural nationalism to participation in military activities, and it was only after his release from jail that he became involved in politics. He soon showed himself to be a skillful and autocratic leader who was able to blend together disparate elements of the radical nationalist movement. He secured the neutrality or support of the Catholic Church.

In spring 1918, in response to the Ludendorff Offensive, the British government decided to impose conscription on Ireland; until then Irishmen had been privileged in contrast to their English, Scottish and Welsh counterparts. De Valera led the opposition to this move, which was abandoned because of fears – almost certainly justified – that it would provoke a mass uprising of the Irish nationalist population. In retaliation the British arrested prominent Sinn Féiners on the spurious grounds that they were in league with Imperial Germany. De Valera and his colleagues were aware of what was planned, but they allowed themselves to be rounded up. De Valera was imprisoned for the rest of the war, but he escaped from Lincoln Jail in February 1919. Before that, in the general election of December 1918, he had been elected for two different constituencies. In one of them he defeated John Dillon (1851-1927), the leader of the moderate Home Rule party.

De Valera’s varied roles in 1916-1918 marked the beginning of an extraordinarily long public career. From 1919-1922 he was president of the Dáil, the independent Irish parliament consisting of Sinn Féin members of parliament. He headed a rival government and administration in opposition to British rule – in effect a "counter-state". He refused to lead the Irish negotiating team that secured independence for most of the country, he opposed the resulting Anglo-Irish Treaty, and he was narrowly defeated when he ran for re-election as president. He took the losing side in the ensuing Civil War and was imprisoned in its aftermath. From 1922-1932 he was in opposition, but he subsequently became head of government for a total of twenty-one years between 1932 and 1959. He won eight general elections. From 1959 to 1973 he served as president of Ireland. He died in 1975 aged ninety-two. 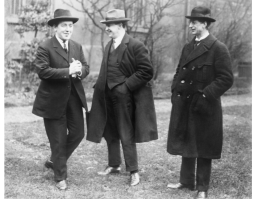