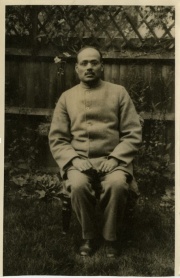 Har Dayal was one of the chief architects of a quixotically sketched blueprint to effect a republican-socialist revolution in British India during the First World War.

As a student at Oxford (1905-1907), Har Dayal (1884-1939) had frequented India House, a weigh-station for Indian radicals. He later edited the nationalist organ Bande Matarm. After his move to the United States in 1911, Har Dayal came to contest the Hindu chauvinism of the nationalist "extremists" and their vision for the future, specifically their attenuated vision of democratic rule.[1] His sojourn in the US afforded him a new outlook. For Har Dayal, the fate of modern civilization itself was dependent on the success of a democratic revolution within the British Empire, opening up to all of its colonies. The question of when and how to launch such a revolution, however, was short-circuited by the sudden outbreak of World War I.

On the eve of the Great War, Har Dayal was the General-Secretary of the California-based Ghadar Party, which counted as its members scores of radicalized Sikh migrants had ventured to coastal cities in the western US and Canada in search of employment. Also involved in the Oakland branch of the syndicalist union, the Industrial Workers of the World, Har Dayal was arrested as a suspected anarchist conspirator in San Francisco shortly after the start of World War I. However, Har Dayal skipped bail and fled to Switzerland en route to the Ottoman capital Constantinople (Istanbul). His putative goal was to incite a series of uprisings in North India, with party members heading companies of native soldiers preparing for insurrection. As far afield as Argentina, China, and Malaya, the call to use the war as the occasion for revolt was heard via Ghadar, the newspaper Har Dayal edited.

German officials at the Foreign Office in Berlin saw the war as an opportunity to make common cause with the Indian nationalists. Max von Oppenheim (1860-1946) had launched the Information Center for the Orient (Nachrichtenstelle für den Orient, NfO) to coordinate activities in the East.[2] Har Dayal was reluctant to accept assistance from Berlin, perceiving the NfO as more interested in supporting the Pan-Islamist Khilafat movement than the Indian radicals, while questioning the ambitions of the Kaiserreich. Har Dayal nevertheless shifted operations from Constantinople to Berlin in early 1915. British records contend that Har Dayal was active in both the Berlin Indian Independence Committee (IIC) and the propagandizing efforts of the NfO at the prisoner of war camp for British Indian soldiers within the so called “Halfmoon” camp at Wünsdorf near Berlin.[3] Nevertheless, Har Dayal spent most of the war squabbling with the IIC and the German authorities, especially after November 1915, by which time it had become clear that the “revolution” in India had abortively foundered.

The catastrophe that was the Great War sobered whatever illusions Har Dayal once held about Germany. As early as November 1914, he expressed suspicions to his friend, Van Wyck Brooks (1886-1963), that the impending crisis was naught but “a war of rival commercial groups.”[4] He confessed in 1920 that, in retrospect, the expectation of assistance from the Imperial Reich for the Indian cause was naïve and wrote that the German Empire had to be obliterated.[5]

After the war, Har Dayal fell into despair and retreated politically, even proffering a robust defense of the British Empire. He lived in Sweden for about a decade after the war, pursuing scholastic interests, before completing a PhD in Buddhist philosophy at the School of Oriental and African Studies (London) in 1930. Har Dayal continued to petition colonial authorities for the right to return to India throughout the 1930s. A conditional return was assented to in 1939, a couple of months before his death.