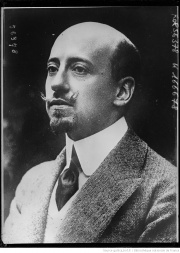 One of Italy’s leading literary figures, Gabriele D’Annunzio agitated for Italian intervention in the war in 1915. After serving as a volunteer fighter pilot, he led a group of fellow nationalists to seize and occupy the city of Fiume in 1919–1920.

Gabriele D’Annunzio (1863-1938), born into a wealthy landowning family in central Italy in 1863, was one of fin-de-siècle Italy’s most celebrated writers and public figures. A precocious and good-looking youth, his first poetry was published at just sixteen, and a highly successful, if controversial, career followed. A prolonged affair with Italy’s most famous actress, Eleonora Duse (1858–1924), a propensity for daredevil antics, and a tendency for sartorial and social extravagance led him into both debt and scandal. Elected to the Italian parliament in 1897, he engaged in a brief flirtation with left-wing politics, but soon returned to his natural home on the right, and in 1910 joined the increasingly prominent Italian Nationalist Association.

A highly prolific writer from the 1880s onwards, he produced poetry, novels, novellas, plays, lyric prose and journalism, which showed considerable linguistic and formal innovation, while drawing heavily on international philosophical and literary movements such as the work of Friedrich Nietzsche (1844–1900) and the symbolists, as well as classical Greek and medieval Italian sources. His rhetorical skill would later be effectively deployed for political purposes.

D’Annunzio and the War↑

The outbreak of the First World War found D’Annunzio in Paris, from where he seized the opportunity to report on the French front for the Corriere della Sera. His war journalism was accompanied by calls for Italy to intervene alongside the Allies, in keeping with his long-term support for irredentism. Returning to Italy in 1915 to speak at Quarto in celebration of Giuseppe Garibaldi (1807–1882), he embarked on a high-profile campaign of demagogic speeches and pamphleteering in favour of Italian intervention throughout what became known as "Radiant May", in company with other leading interventionists such as Cesare Battisti (1875–1916).

When war was declared, he quickly volunteered as a fighter pilot, despite his age (fifty-two). In a botched raid over the Dalmatian port of Zara, he was injured and lost his sight in one eye. He saw little real service, spending most of the war writing, romancing, spending and socialising, yet successfully mythologised his military contribution as heroic and daring. His chief claim to this status lay in the dramatic (if militarily insignificant) flight over central Vienna on 9 August 1918 with the 87th Air Squadron, dropping tricolour propaganda leaflets on the enemy capital from just 800 metres.

The Expedition to Fiume and Post-war Politics↑

With widespread nationalist dissatisfaction in Italy at the outcome of the Paris Peace Conference, D’Annunzio returned to politics in September 1919 with the seizure of the Croatian city of Fiume (Rijeka). Although not included in the terms of the Treaty of London (1915), many irredentists considered the Italian claim to Fiume to be strong. D’Annunzio led a so-called "legion" of several thousand volunteers, including many veterans, to claim the city for Italy, ejecting the inter-Allied occupying force. The Italian state rejected this annexation, despite public enthusiasm at home, and instead blockaded the city in an effort to end his illegal occupation. In September 1920, D’Annunzio proclaimed himself dictator of the proto-fascist "Regency of Carnaro", governing the area around Fiume, but was forced by the Italian army to evacuate in late December 1920, when the Treaty of Rapallo finally established the city as an independent republic.

D’Annunzio was pardoned for his actions and returned to literary activities. Generally sympathetic to the fascist regime and its overseas conquests, he nonetheless remained on the margins of political life. For Benito Mussolini (1883–1945), it was more convenient to let D’Annunzio serve as a myth than as a political actor and potential rival, and the poet proved very willing to participate in a process of self-glorification, residing at an enormous self-celebratory monumental villa-complex with mausoleum, Il Vittoriale degli Italiani, until his death in 1938.