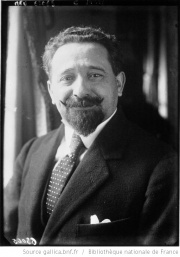 Afonso Costa’s name is indelibly attached to Portuguese interventionism. He led the government when Portugal entered the First World War in March 1916; participated in the first Sacred Union cabinet; and led the second, starting in April 1917. He also led the delegation to the Paris Peace Conference from March 1919 onwards.

Afonso Augusto da Costa (1871-1937) was born on 6 March 1871 in Seia, a small town in central Portugal, and studied law at the University of Coimbra. By the time he graduated he had already married and had made a name for himself both as a scholar and as a republican firebrand. His doctoral thesis – “The Church and the Social Question” – attacked Pope Leo XIII’s (1810-1903) encyclicals and propounded a reformist Marxist current. The prestige he gained as a lecturer in Coimbra helped his private legal practice, and this in turn boosted his political career in the Portuguese Republican Party, to which he belonged. He was first elected to parliament in 1899, a rare breakthrough for the Republicans. In June 1900, Costa defended a motion calling for resolute steps towards the establishment of a Republic. Shouted down by other parliamentarians, he warned the ministers present in the House: “Rira bien qui rira le dernier”.

A well-known, active figure, (including as a journalist), Costa was re-elected to parliament in 1906, and used this position to galvanize republicans around questions such as secret payments to the royal family above and beyond the Civil List. Costa hesitated between parliamentary opposition to the monarchy and revolutionary activity, for which he was not cut out. An ill-fated rising in 1908 led to hundreds of arrests, including Costa’s; but the threat of the prisoners’ deportation to the colonies spurred Carlos I, King of Portugal’s (1863-1908) many enemies, resulting in the murder of the reigning monarch and his son, Luís Filipe, Crown Prince of Portugal (1887-1908). Costa and the other prisoners were released, but monarchists remained divided and deaf to the pleas for unity from the young Manuel II, King of Portugal (1889-1932). It was no surprise when, on 4-5 October 1910, the monarchy was overthrown by a violent revolution and a Republic was proclaimed.

In the provisional government, which took power after the revolution, Afonso Costa was given the justice portfolio. Among other tasks, this meant settling scores with the Catholic Church, seen by many republicans as an obscurantist force which, alongside the monarchy, had been responsible for Portugal’s decadence. Costa’s campaign against the Church culminated in his Law of Separation, published in April 1911, henceforth regarded as a touchstone separating “true” from “false” republicans. But Costa did not have it all his own way, since a conservative republican bloc emerged within the Constituent Assembly, a body which, after the approval of the Constitution, had transformed itself into a regular parliament. This conservative bloc was strong enough to elect one of its own, Manuel de Arriaga (1840-1917), to the Presidency, and to control the Senate. This meant that despite leading the largest formation in the Chamber of Deputies, the Democrats (the semi-official name of Costa’s wing of the Portuguese Republican Party), Costa was thwarted in his designs, and politics became increasingly bitter. He led a government in 1913, and was able to balance the budget, a rare feat in Portugal, only to fall in the face of the President’s insistence that a neutral cabinet should organize the forthcoming general elections.

The vital question of whether or not to intervene in the European war could only be decided once the domestic political situation had been resolved (through the revolt of 14 May 1915, which opened the door to a Democrat-controlled parliament and a friendly President of the Republic) and Great Britain had approved Portugal’s entry into the ranks of the Allies, in February 1916. By then Costa had returned to the premiership, and he successfully navigated a difficult diplomatic situation, holding his nerve in the face of London’s seeming indifference to Portugal’s plight. Once war had been declared, Costa brought the Democrats into a coalition with António José de Almeida’s (1866-1929) Evolutionists, dubbed, in the French style, a Sacred Union. There would be two Sacred Union governments, the second, from April 1917 onwards, led by Costa himself. These governments prepared and dispatched military expeditions to East Africa and the Western Front, and endeavored to prepare Portugal for the shock of war, but with mixed results. The conflict’s growing unpopularity, the ever-harsher measures needed to preserve peace on the home front, and a growing isolation from the party’s grass-roots led to a dramatic fall in Costa’s popularity. The ease with which his government was overthrown by Sidónio Pais (1872-1918), in December 1917, made this very clear.

Arrested in Oporto, Costa was later on dispatched to the fort of Elvas, on the Spanish border. Never charged with any crime, he was released on 30 March 1918, leaving Lisbon for Paris, his home until his death.

Sidónio Pais’ murder in December 1918, and the ever-shifting balance of political power in Lisbon, allowed Costa to take over from Egas Moniz (1874-1955) as the leader of Portugal’s negotiating team at the Paris Peace Conference, but the results were negligible. The terms of the Treaty of Versailles did not confirm the far-sightedness of the interventionist position, and could not therefore serve as a springboard for a political comeback. In his absence, the Democratic Party fell prey to bouts of vicious infighting which contributed significantly to the Republic’s growing instability. Although frequently mentioned as a providential figure capable of rallying all republicans, Afonso Costa never served in, or led, another Portuguese government, even if he did return to Lisbon in November 1923 to attempt the formation of a grand coalition.

The overthrow of the Republic by the army, in May 1926, and the subsequent rise to power of António de Oliveira Salazar (1889-1970), while turning Afonso Costa from an emigrant into an exile, also brought renewed dynamism to his political career. His name was often mentioned in conspiracies designed to overthrow the new regime. However, all of these failed, while the outbreak of the Spanish Civil War added to the physical separation from his country and extended family. A sudden illness took his life in May 1937 at the Hotel Vernet, which had become his Parisian home.