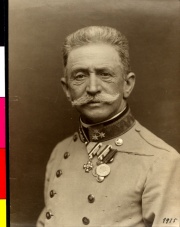 Franz Conrad von Hötzendorf was an Austrian officer and Chief of the General Staff of the Austro-Hungarian Army from 1906 to 1911 and from 1912 to 1917.

From 1863 to 1867 Conrad attended the cadet institute at Hainburg and then the Theresian Military Academy at Wiener Neustadt. There he developed an increased interest in natural science, which resulted in a worldview based on social Darwinism. After graduating from War School (Kriegsschule) in Vienna he was immediately transferred to the General Staff Corps of the Austro-Hungarian army.

After two years in Kaschau (today Košice, Slovakia) at the headquarters of the 6th Cavalry Brigade, he was assigned to the 4th Infantry Division, which had been mobilized to reinforce the army for the occupation campaign of Bosnia and Herzegovina in 1878. Conrad and his division entered Sarajevo with the 7th Brigade in September 1878. In 1882 he became a member of the staff of the 47th Infantry Division (in the rank of captain), which had been sent to Southern Dalmatia to suppress an insurrection there. He distinguished himself in both campaigns – according to his personal records he was “brave, cold-blooded” and “outstandingly courageous” and received the military service cross with war decoration.

In 1883 Conrad became chief of staff of the 11th Infantry Division at Lemberg (today Lviv, Ukraine), where he became acquainted with the future theatre of war against Russia. During this period he established his reputation as a great innovator by showing considerable ability in reforming field exercise. Elevated to the rank of major, he was assigned to the War School in Vienna as a military tactics instructor. His teaching style fascinated his students, many of whom became personally devoted to him. During that time he also engaged as a military writer, concentrating on tactics and advocating offensive tactics at all costs.

In 1892 Conrad requested reassignment to the infantry and became a battalion commander in the 93rd Infantry Regiment at Olmütz (today Olomouc, Czech Republic). In 1895 he was assigned as commander of the 1st Infantry Regiment (Kaiser) at Troppau (today Opava, Czech Republic), where he was able to put his theories into practice over the next four years. He taught that attack was always superior to defence and that forces should be heavily concentrated at the point where the enemy was most susceptible. Moreover, he carried out individual battle training. In Troppau, Conrad’s activities brought him to the attention of Franz Ferdinand, Archduke of Austria-Este (1863–1914) for the first time, who conducted a surprise inspection and was full of praise for Conrad and the regiment.

After being assigned commander of the 55th Infantry Brigade at Trieste, in 1903 he became commander of the 8th Infantry Division at Innsbruck and was promoted to the rank of Feldmarschallleutnant (lieutenant general). During his time in Trieste he participated in the revision of the Austro-Hungarian infantry regulation. In 1902 Conrad ordered the 55th Infantry Brigade to bloodily suppress a strike of the stokers’ union of the Austrian Lloyd. Conrad became an impetuous advocator of the idea of a preventive war against either Italy or Serbia.

Conrad’s steady efforts to strengthen and modernize the army met with the expectations of the Archduke Franz Ferdinand, who asserted his influence on Francis Joseph I, Emperor of Austria (1830-1916) in the appointment of Conrad as Chief of the General Staff on 18 November 1906. His support of a preventive war and differences over the Bosnian crisis brought him into opposition with foreign minister Alois Lexa von Aehrenthal (1854-1912) and finally led to his dismissal at the end of 1911. In view of the mounting difficulties in the Balkans (resulting in the Balkan Wars) and following the resignation of Aehrenthal, the Archduke insisted on Conrad’s reappointment, which the Emperor accepted in December 1912.

After the assassination of Archduke Franz Ferdinand, Conrad was one of the main proponents of a preemptive war strategy against the Kingdom of Serbia, but was also aware that the monarchy’s armed forces were not ready for a rapid and decisive strike against Serbia. Conrad had planned to end the war in the Balkans and thus deter Russia from intervening on the northeastern frontier. The ensuing mobilization of the Austro-Hungarian army was, however, ill-managed and Conrad’s mobilization schemes were complicated and contradictory. Russia’s quick mobilization and the incursion of Russian troops into Galicia forced Conrad to hastily re-deploy part of the forces already on their way to Serbia. This resulted in logistical chaos. His underestimation of Serbian determination and preparedness, the effect of quick-firing artillery, and Governor of Bosnia and Herzegovina Oskar Potiorek’s (1853-1933) arbitrary acts led to a failure of the operation against Serbia. The situation on the Eastern front also ended in disaster with the defeat at Rava-Ruska (today Ukraine) and the fall of Lemberg.

Only with the massive support of Germany was Conrad able to repulse the invading Russian troops after the breakthrough at Tarnów-Gorlice (today Poland), re-conquer Galicia, occupy Serbia, Montenegro, and Romania and organize a stable front against Italy, which had entered the war on the side of the Entente in 1915. The partnership with the German Supreme Army Command (OHL) was, however, soon strained; the relationship between Conrad and General Erich von Falkenhayn (1861-1922) worsened due to fundamental differences in questions of warfare and Conrad’s resistance to the submission of the Austro-Hungarian troops under the OHL.

Despite the failures and the fact that his credibility as an effective commander in war had been destroyed, Conrad still had a completely free hand in all military planning and operations. Only after Charles I, Emperor of Austria’s (1887-1922) accession to the throne upon the death of Franz Joseph I in November 1916 did Conrad’s power begin to erode, although he was promoted to field marshal. The new emperor assumed the supreme high command himself and pursued a peace policy with the Entente. After the setbacks in the South Tyrolean offensive and the Russian breakthrough at Lutsk (today Ukraine) during the Brusilov Offensive, Conrad was dismissed by Charles I in March 1917 because of disagreements over questions of warfare, politics and staff. Upon the emperor’s request he took over command of the Army Group South Tyrol. Following an unsuccessful offensive against Italy in the spring of 1918 Conrad was dismissed on 15 July, but was also promoted to the title of Count and received the honorary post of a colonel of all Life Guards. He retired shortly thereafter. After the war he published his memoirs “Aus meiner Dienstzeit”.

In the First Republic the historical picture of Conrad was highly mythologized; his former officers even called him the “greatest Austrian commander since Prince Eugene”. Negative aspects of his command were completely neglected. After World War II the pendulum swung in the other direction; a rather negative picture was now drawn – culminating in Lawrence Sondhaus’ biography with the subtitle “The Architect of the Apocalypse”. During his military career Conrad dedicated all his efforts to the reform of military education. He always emphasized the significance of well-trained, offensive-minded infantry, as well as strategic and tactical offense. However, being a tactician rather than a strategist he often drafted grandiose but unrealistic plans, disregarding the realities of terrain, climate, supplies and logistics. His underestimation of the enemy forces and of artillery support, his insistence on mobile warfare, and the lack of support and money for his reform schemes led to a disaster at the outbreak of war and during the Brusilov Offensive and finally also to his downfall.