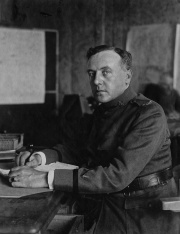 Fox Conner (1874-1951) graduated from West Point in 1898 and was among the first officers to receive training for service in the army’s general staff corps inaugurated in the early 20th century. Conner also taught at the Army War College and other service schools. In 1911, he served as an American observer with a French artillery regiment and gained valuable insight into the operation of the French military, as well as fluency in the French language.

On 28 May 1917, after the American entry into the war on 6 April 1917, Conner sailed for Europe with John J. Pershing (1860-1948) as a member of the initial general staff of the American Expeditionary Forces (AEF). When Pershing appointed Conner to the position of AEF Chief of Operations (G-3) on 5 November 1917, Conner entered what one AEF general termed “the inner circle of the inner circle”[1] around Pershing.

The unprepared American army lacked even a single organized combat division when the United States entered the war. Fox Conner made his first significant contribution to the AEF by working with Major Hugh Drum (1879-1951) to design a “square division” that organized four regiments of infantry grouped into two brigades.[2] The AEF square divisions, which eventually numbered 28,000 men, were more than twice the size of the enemy divisions. The square division structure allowed the AEF to utilize its raw manpower advantage while also accommodating its shortage of trained officers by enabling the available officers to effectively control twice as many men. The large divisions were also intended to empower the AEF units to effectively outlast the enemy in prolonged combat.[3]

Conner, with Drum and Colonel LeRoy Eltinge (1872-1931), co-authored a detailed strategical study, submitted to Pershing on 25 September 1917, which formed the foundation for all AEF operational planning. In subsequent studies and memoranda, Conner and his Operations Section colleagues consistently urged the formation in 1918 of an independent American army that would invade the German-held region of Lorraine in 1919 to capture essential coal- and iron-producing areas. Conner’s studies accurately projected that the British and French armies would successfully contain the anticipated German offensive against the Western Front in 1918, while the AEF formed itself into a two-million-man force sufficient to launch a war-winning offensive in 1919.

Fox Conner’s fundamental view—that the British and French should effectively shield the AEF’s development into a large independent army capable of winning the war in 1919—brought him into frequent conflict with his allies. Concerned that the war might be lost in 1918, the French and British high commands sought to “amalgamate” (i.e., incorporate) individual battalions and companies of American infantry directly into their armies to assist in defending the 1918 German offensives. These amalgamation disputes, which General Conner termed “the war within the war,”[4] highlighted French and British doubts as to the competency of the American officer corps, as well as American suspicion that its allies intended to diminish the influence of the United States in post-war affairs. Through a series of acrimonious intra-allied conferences, Conner provided Pershing with the studies and arguments that enabled Pershing to strike a balance between assisting the Allies in defensive efforts and the formation of the independent American army that both Pershing and Conner believed necessary for victory in the war

The AEF in Combat↑

As AEF Chief of Operations, General Conner served as Pershing’s chief assistant on matters involving planning and execution of all major American combat operations during the war. In 1957, George Marshall (1880-1959), who served under Conner in the AEF Operations Section, noted that Pershing “operated very largely through his operational staff—that was General Fox Conner—so far as fighting was concerned.”[5]

Beginning in May 1918, several AEF divisions conducted successful operations, as components of the French army, at Cantigny, Chateau-Thierry, Belleau Wood, and Soissons. On 12 September 1918, the newly-formed American First Army, under Pershing’s independent field command, launched a successful attack to eliminate the St. Mihiel salient in Lorraine that Conner’s strategic studies had identified as an essential prerequisite to the AEF’s 1919 Lorraine offensive. Prior to the St. Mihiel Offensive, Conner helped orchestrate a successful feint, known as the “Belfort Ruse,” which misled the German army as to where the American attack would occur. Two weeks later, on 26 September 1918, the American First Army attacked into the heavily fortified area between the Meuse River and the Argonne Forest. In six weeks of fighting, the AEF sustained heavy casualties, including more than 26,000 killed, but succeeded in its mission to capture a strategic rail line to prevent the withdrawal of the German army. Throughout the 1918 autumn offensives, Conner worked closely with staff officers assigned to duty with the American First Army, including Drum and Marshall. Conner, Marshall, and Drum were each involved in the nearly disastrous “Race to Sedan” incident, in which American troops, while attempting to capture the city of Sedan ahead of the French army, were nearly fired upon by both French and American forces. Later critics of the war castigated Conner for a callous attitude toward American combat losses.

Following World War I, Fox Conner advanced to the rank of major general and held a variety of field command and general staff positions, including Deputy Chief of Staff of the Army. While commanding a brigade of troops in Panama during the early 1920s, Conner formed a mentor-protégé relationship with Dwight D. Eisenhower (1890-1969), who considered Conner “the outstanding soldier of my time” and “the one more or less invisible figure to whom I owe an incalculable debt.”[6] General Conner retired in 1938 after suffering a stroke. He lived in quiet retirement until his death in 1951. 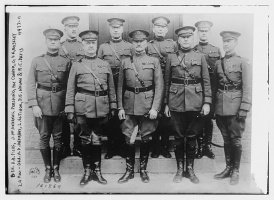 General Fox Conner with General John J. Pershing and others