On 22 July 1917, King Vajiravudh of Siam declared war on Germany and Austria-Hungary. In the following year, the royal government sent the expeditionary force of 1,284 Siamese volunteers to assist the allies on French and German soil. Despite the fact that the war declaration and the dispatch of the soldiers to Europe decisively marked the entrance of Siam into its first global conflict, the First World War is only limitedly registered in the social memories of Thai people today.

This might have to do, first of all, with the obvious fact that the number of participants and the degree of society’s involvement in World War I was limited, in comparison to other international wars, namely the Second World War, Korean War, and Vietnam War, in which Thailand played a role. As the last volunteer passed away in 2003, the meaning of the First World War is confined mostly to the military, a number of the volunteers’ descendants, and some small circles of history enthusiasts. While the war is annually commemorated on 11 November, all other wars are commemorated on Veterans’ Day, 3 February, with the participation of important members of the government and the surviving veterans themselves. It should be noted that in Thailand, like in many other parts of the world, social memory and political oblivion are highly selective. Thailand’s participation in World War I was a decision made by the absolutist monarchy and its supporters. Perhaps that is why it found limited use in Thai politics after the pro-democracy regime change of 1932, which brought about struggles to define each faction’s place in the course of Thai history. In the aftermath of World War II, in which Thailand sided with Japan, Prime Minister Plǣk Phibūnsongkhrām (1897-1964) briefly attempted to revive the memory of Thai participation in World War I, hoping to reconcile with the Western powers. Lastly, it should be noted that the prestige of the Thai military came under scrutiny as a result of its role in politically suppressing popular demonstrations on 14 October 1973 and in May 1992, which is a possible reason why the general public has distanced itself from military commemorations ever since. Indeed, World War I commemoration in Thailand is usually state-sponsored; however, on the occasion of the centennial commemorations, more participation and initiatives from other sectors of society was observed.

While a small number of the families of volunteers continue to hold private commemorations, especially with Thai Buddhist rituals, and also join the official commemorative ceremony every year, the majority of the descendants are not even aware of their ancestors’ role in the war. World War I commemoration in Thailand is mostly the responsibility of the royal Thai army, the War Veterans Organization (WVO), and the government, with limited participation from non-governmental parties.

Since 1926, Thailand’s participation in World War I has been commemorated on 11 November, instead of 22 July, as was previously the case. The annual commemoration has been organized by the WVO since 2003.[1] It is a combination of religious and military ceremonies. The Buddhist religious ceremony sometimes takes place at a royal temple, Bowonniwet Vihara, and sometimes at the WVO office. The nature of the religious ceremony is less publicized and rather limited to the army personnel and the descendants of the soldiers who took part in the war. The military ceremony is, on the other hand, organized as a national event and open to the public. It is held at the World War I monument, erected in memory of the fallen soldiers in 1919 at Sanam Luang, the historic square in front of the royal palace. The ceremony is attended by representatives of the royal family, army and other government bodies, descendants of the volunteer soldiers, as well as foreign military personnel and diplomatic corps. As part of their work, the WVO often organizes a lecture tour to schools, mostly in Bangkok, to explain the role of the military in Thailand. In relation to the centennial commemoration, the topic of World War I, which otherwise hardly has a place in the national school curriculum, has become the emphasis of these school lectures given by invited specialists.

Outside Bangkok, there are a small number of monuments related to World War I. It is not known precisely when these World War I commemorative monuments were built. Some local governments hold commemorative events, especially in the provinces of Ayutthaya, Singburi and Suphanburi, which have monuments erected in honor of the men who volunteered to join the war and are regarded as local heroes. The centennial commemorations were widely reported in local and national media outlets.[2]

Part of the foreign community in Thailand took part in the centennial commemoration. It should be mentioned that the British embassy has a cenotaph and the French ambassadorial residence a plaque commemorating their fallen World War I countrymen who once lived in Bangkok. In November 2014, the French embassy organized an exhibition of photos of the Siamese volunteer troops in Europe, taken from footage filmed in 1918-1919. The following year, it cooperated with the Thailand Knowledge Park to re-display the photos and screen the original footage, as well as organize a talk on World War I. Furthermore, the French cultural center in Bangkok, the Alliance Française, screened films and documentaries on World War I every November from 2014 to 2018. In December 2015, the Belgian embassy cooperated with the national museum of Thailand to present an exhibition titled “Belgium, Siam and World War I. An Enduring Friendship before the Conflict and during the Great War” at the National Gallery.

Academia and the Centenary↑

Academia in Thailand became active from the middle of 2017, as 22 July of that year marked the 100th year since Siam’s war declaration and the decision to send Thai volunteer troops to Europe. The central library of Chulalongkorn University, which was established in 1917 by Vajiravudh, King of Siam (1880-1925), also known as Rama VI, whose reign represents the modernization of Thailand’s education and foreign policy, organized a seminar and an exhibition on Thailand and World War I in July 2017. On this occasion, the registration book of the names and backgrounds of the volunteer soldiers, kept at the army archive, was exhibited to the public for the first time. In the same month, River Books Publishing House[3] organized a launch of the book Siam and the First World War. An International History by Stefan Hell. Whereas the role of Siam in World War I continues to be marginally or not even mentioned in national and international publications, this book is considered the most important scholarly work which places Siam, and not just King Vajiravudh, at the center of its World War I study. Basing its analysis on Thai, English, French and German sources, it was made available in the English and Thai languages. In connection with this book launch, an exhibition titled “Siam and World War I” was held at the Thai Police Museum from 23 July to 30 September. The exhibition displayed pictures and objects, some of which had never been disclosed to the public before, from the Chakrabongse collection and other private collections. Coincidently, the Vajiravudh Archive, the official keeper of the king’s works and related documentation, held an exhibition “Siam and World War I” from 22 July to 30 September displaying pieces from its own collection.

In November 2018, the history department of Chulalongkorn University and the French Research Institute on Contemporary Southeast Asia (IRASEC) co-organized an international conference titled “Masters of Their Own Destiny. Asians in the First World War and its Aftermath” (9-10 November) and a photo exhibition titled “Asians in World War One. A Visual History of the Indians, Siamese and Vietnamese at War” (9-23 November). In connection with these activities, the Alliance Française in Bangkok organized the exhibition of the portraits of Asians engaged in the Great War, including a Siamese volunteer soldier, drawn by Swiss painter Eugène Burnand (1850-1921), and a screening of the black-and-white silent footage of the Siamese troops participating in World War I in France and Germany, which included their participation in the victory parade in Paris in 1919. This event also included the introduction of 1914-1918-online. International Encyclopedia of the First World War to the Thai public. On 11 November, the participants of the above-mentioned conference also had the opportunity to visit the one-day special exhibition “100 Years of Volunteer Soldiers of WWI (1918-2018)” at the Bangkok National Museum (Phra Nakorn), and later, as a group, to take part in the official commemorative ceremony at Sanam Luang and lay wreaths at the monument to the fallen soldiers.

During the centennial anniversary period, World War I and Thailand’s involvement received more attention in Thai popular media. The topics were featured in established media like the magazines Matichon and Sarakadee as well as online sources like The Standard, The Cloud, The Momentum, and The Matter.

Another group interested in the history of World War I and in commemorating the war is history enthusiasts and private collectors. Thai reenactment groups have shifted their focus on the wars of the later period to World War I. They apparently became involved in the official World War I commemoration, as they were invited to officially participate in the ceremony at Sanam Luang on 11 November 2018. 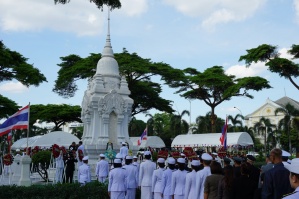 National commemoration at the WWI Monument in Bangkok in 2018 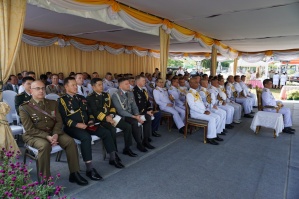 Ceremony at the WWI Monument in Bangkok 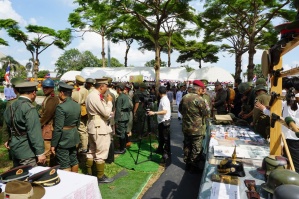