The centenary of the First World War in Singapore highlighted official and popular indifference about the commemoration of a conflict which does not feature in the state’s narratives about the emergence of Singaporean nationhood. In Singapore, there has long been an unspoken view that war commemorations at the two colonial-era memorial sites, Kranji (unveiled in 1957) and the Cenotaph (unveiled in 1922), are not about commemorating the history of Singaporeans, but that of the colonial rulers.[1] Singaporeans have at times subverted the top-down commemoration of the Second World War with their own local commemorative activities.[2] However, in the case of the First World War, there has been little popular interest. This indifference may illustrate a dialectic of top-down versus bottom-up remembrance identified by, among others, T. G. Ashplant, Graham Dawson, and Michael Roper.[3]

Singapore’s academic conference to mark the centenary of the outbreak of the First World War was held at Nanyang Technological University on 19-22 February 2014. Keynote speakers at the conference, The British Empire and The Great War: Colonial Societies/Cultural Responses, included distinguished historians Jay Winter, Sir Hew Strachan, and John M. MacKenzie.[4] It attracted scholars from all four corners of the globe, and included lively events such as a musical performance by Australian balladeer Eric Bogle of his well-known anti-war songs.

On the last day of the conference, the Singapore-based organizer, expatriate art historian Michael J. K. Walsh, expressed frustration that despite his best efforts there had been little interest shown in the conference within Singapore itself, even from history teachers in schools, and that there were no speakers from Singapore discussing Singaporean history. This was not surprising. In the national state narratives taught in Singaporean schools, the First World War is only very briefly mentioned. It is seen as a war of the European colonial powers that had little impact on the people of Singapore. In contrast, the Second World War and the Japanese occupation are portrayed as bringing suffering to the whole nation, and as crucial steps towards postwar nation-building, in what is called the Singapore Story.[5]

On 5-7 December 2018, Walsh organized the conference Empire, Armistice and Aftermath: The British Empire at the “End” of the Great War. This event at the closing of the centenary of the First World War was as interesting and lively as its 2014 counterpart, featuring a documentary about Eric Bogle visiting the historic sites of the Western Front. Heather Streets-Salter, who researches imperial history, was invited to talk about her recently published book on anti-colonial movements in Southeast Asia during the First World War, which included material on the 1915 Sepoy Mutiny in Singapore. However, the conference had a reception similar to its 2014 predecessor.

Colonialism and Commemoration of the First World War in Singapore↑

Commemorative events held between 2014 and 2018 give a fuller picture of the indifference towards such occasions. The most significant commemorative event was organized not by the Singaporean state, but by representatives of the former colonial power – Britain. Remembrance Sunday 2018 was a half-hour ceremony held on 11 November, at the Kranji War Memorial, which is owned and maintained by the Commonwealth War Graves Commission (the former Imperial War Graves Commission), not the Singaporean government. Remembrance Sunday 2018 was organized by the British High Commission in Singapore, with the co-operation of the Singapore Armed Forces Veterans League. The recent co-operation of the Singapore Armed Forces Veterans League, founded only in 1990, as co-organizer of Remembrance Sunday has helped the British High Commission to partially dispel the perception that this is an event mostly for the former colonial power’s military forces.

In 2018, the British High Commissioner to Singapore Scott Wightman gave the Remembrance Sunday address before an audience of predominantly British military personnel, mostly from a visiting Royal Navy vessel, and British expatriates, mostly children from British expatriate schools. Smaller numbers of Australian and New Zealand military personnel as well as representatives of the Singapore armed forces were also in attendance. Very few members of the Singaporean public attended. There were no members of the Singaporean government present. In an attempt to dispel the colonial origins of the commemoration of war in Singapore, the High Commissioner made very little reference to the First World War. He focused on the Second World War, chronicling the heroics of Singaporean fighter pilot Tan Kay Hai (1914-1991), who served with distinction in the Royal Air Force, even flying over Normandy on the D-Day invasion in 1944. The High Commissioner highlighted that Tan was buried at Kranji among the Commonwealth war dead when he died in 1991. Matthew Graves has called these types of acts “commemorative” or “memorial” diplomacy, which is designed to improve state relations.[6]

On Remembrance Sunday, another ceremony was held downtown by an organization also closely associated with the colonial era – the Singapore Cricket Club, formerly the sports club of the colonial rulers. The club is still a relic of the colonial past and a place of privilege. A small service was held by the club at the Cenotaph in the old center of the colonial administration of Singapore.[7] The Cenotaph was originally erected to remember the 124 mostly Europeans but also Eurasians from Singapore who signed up and died in the First World War. However, after the Second World War, it was dedicated to the fallen of that war as well.[8]

For the centenary, Rosemary Lim, together with several other expatriates, put together a book, Forgotten Names Recalled, with short biographies of the First World War fallen listed on the Cenotaph.[9] She set up a webpage with the same name and purpose as the book in collaboration with the Imperial War Museum’s First World War Centenary Partnership project. Singapore’s National Heritage Board gave support to Lim’s project, as the Cenotaph finally had been recognized as one of Singapore’s national monuments in 2010. This was well after many other monuments and sites were included; the process began in 1973.

The centenary of the First World War in Singapore was muted by concerns over commemorating colonialism. There were even no museum exhibitions. However, Singaporean state-run television did commission a four-episode series called Asia in the Great War, which was finally screened in November-December 2018.[10] The series took a subaltern approach, dealing with the lives of forgotten Indian and Vietnamese soldiers, and the large numbers of Chinese laborers on the Western Front, as well as Japan’s contribution to the war. These experiences were woven into a story of Pan-Asian anti-colonialism. The series, although not popular, was well-received by local historians, as it framed remembrance in the context of empire and represented an assertion by the colonized of the value of their own memories in the face of dominant imperial narratives. Thus, at the very end of the centenary, the state creators of public history in Singapore finally began tentatively moving towards overcoming their problem of how to portray the First World War. 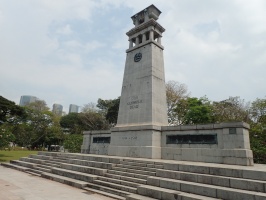